Why Never Trumpers Will Never Shut Up

Kurt Schlichter  |  Mar 07, 2019
The opinions expressed by columnists are their own and do not necessarily represent the views of Townhall.com.
Top Columns
Trending on Townhall Media 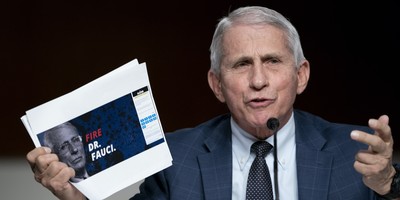 There are not that many Never Trumpers anymore, though the media (and the remnant Never Trumpers) try to fool you into thinking so. The honest Never Trumpers, the ones who thought that this orange New York real estate developer with the succession of hot wives was not a real conservative and would betray us the first chance he got, have evolved. It turns out that Donald Trump is the most consistently and effectively conservative president since Reagan. The Never Trumpers who weren’t in on the scam noticed his track record of conservative success and morphed.

Some became actively pro-Trump. I fit in there, as the first chapter of my book Militant Normals describes. Now, I was anti-Trump, not Never Trump, since I was already Never Jeb! and Never Felonia Milhous von Pantsuit and you can only have so many nevers in your life. Trump earned my support with his consistent and remarkable conservative achievements, so he got it. I am now an advocate, highlighting his successes, much as I do as a lawyer for clients. There are plenty of folks ready to highlight his missteps, and I seek his success.

Others are still freaked out about his pugnacious, allegedly unseemly manner (which I and others consider a strong plus), and they became merely Trump Neutral. Many of them fret about his mean tweets and wish he had the quiet dignity that the rest of us associate with failures like George W. Bush – you know, the kind of Republicans Democrats love in retrospect. These are the folks who “call balls and strikes,” criticize him where they oppose him and support him (sometimes grudgingly) when he does something they like. Fair enough – you have to follow your principles, assuming you have any.

Which brings us to the cruise-shilling hacks of Conservative, Inc., who are still ticked off that this guy came along and threw a handful of sand into the gears of the grand donor grift they had been running for three decades.

The Fredocons needed someplace to go, the Michael Corleones of conservatism having kicked them out of the family following their betrayal. The Never Trumpers, who have now gathered on deck at whatever sad website The Bulwark is after having gathered on the deck of the recently-sunk Weekly Standard, crave attention. That’s why whoever Charlie Sykes is – he edits The Bulwark and tweets about how conservatives have disappointed him – decided to send a leftist abortion activist to CPAC as the site’s correspondent so she could give what-for to those icky pro-life people who are trying to stop the Democrat infanticide push. But hey, when some liberal billionaire is bankrolling your Trojan horse conservative outlet, you need to walk a fine line between trying to look enough like a horse to get inside the gates but still be enough like a donkey so your benefactor keeps writing you checks.

Now, the backlash these hacks received from the CPAC fiasco had the salutary effect of reuniting some alienated conservatives. Pretty much everyone in actual conservatism agreed; this was a garbage move by a garbage outfit dedicated to garbage outcomes and their own personal benefit. Sykes tried to play the victim, but no one was buying what these scammers were selling – as I put it on Twitter: “True Conservatism (TM) now means *squints* hiring a left-wing descendant of literal communists for your magazine and promoting her Marxist ramblings while having her troll pro-life events wearing your credentials. Ahoy. [cruise ship emoji x 20]” Too bad it took standing up together against killing babies to realize that the people at the various levels of sub-Never Trump skepticism have done so much more to unite us than divide us.

Today’s Never Trump is a tiny group of greedy misfits whose gravy train got derailed – they would put it “an elite group of select individuals of discerning taste” – but we actual conservatives do spend a lot of time on manhandling them. They cite that as evidence of their lasting influence, but it’s actually the result of two other factors. The first is human nature – people hate traitors. There’s a reason civil wars tend to be so much more brutal than other wars. It’s the sense of betrayal, and the actions of turncoats like Bill Kristol – whose tiresome Twitter feed is becoming increasingly difficult to distinguish from those of Senator Will Brown Side Piece and Senator Panders with Wolves – infuriate the very same people he shamelessly hustled for decades.

The other reason is that the Never Trumpers have a media presence utterly out of proportion to their dwindling numbers and influence. Why? Because they say exactly what the leftist media needs them to say. You know when you get a Never Trumper on your MSNBC or CNN show, he’s going to faithfully parrot the party line of Nickleback-channel cliché Joe Scarborough or noted particle physicist Don Lemon. When I defended Trump on CNN in 2015, Lemon cut my mic, and I’ve never been back on CNN since (though, hilariously they once called me begging to come on to discuss a big story because I was one of only a few in-the-know people without a non-disclosure agreement on the issue – I told them to pound sand). They want shills and hacks, and when you want shills and hacks, you get yourself a Never Trumper.

The problem is, for the uninformed in the CNN/MSNBC audience, including those stuck at the airport and forced against their will to watch, having these Never Trumpers on identified as “Republicans” or “conservatives” gives the impression that actual Republicans and/or conservatives agree with the liberal narrative. The fact is, the likes of Jeff Flake and Charlie Sykes speak for no one who isn’t already inclined to be a Lido Deck-dweller on the upcoming Bulwark cruise.

So, what is their endgame? Do they even have one, or are they going to just run out the grift until the latest billionaire sucker tires of setting fire to his money? They can’t believe that somewhere down the road, if they keep the fires of appeasement and defeat in the face of aggressive progressivism alive, we Normals are going to come to our senses and demand a return to the paradigm of losing like good gentlemen. Sean Trende had a terrific thread on this, especially when he points out that The Bulwark’s attack on the prosecution of the cultural issues that motivate the base more than the GOP establishment priority of sucking up to big business makes reconciliation difficult.

There can’t be a reconciliation, not on their terms. There is no path to an outcome where the representatives of the conservative base that supports Trump comes to its senses and shows up at Jeb! Bush’s compound, wailing “We were wrong! Save us!”

The Never Trumpers seem to have no answer to the Trump era except to pine for a return to a status quo that we simply won’t return to – one where the government is run by, and run for, the ruling class. The country must continue to evolve to incorporate Normal Americans’ interests, a process Trump began, or it may fall apart. I write about an America split apart into red and blue in my novels People’s Republic, Indian Country and Wildfire, and while my hypothetical future is action-packed and occasionally hilarious (at the expense of liberals), potential chaos is not a good thing. And the Never Trumpers are making it more likely.