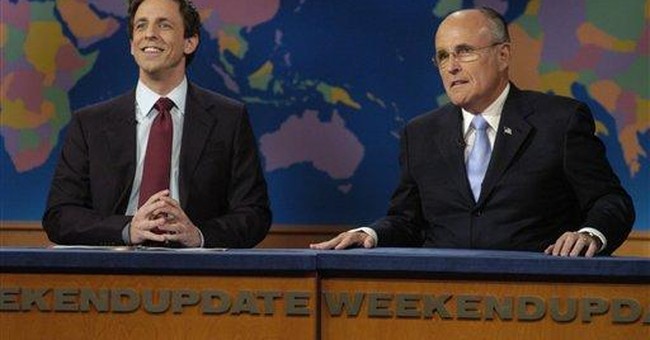 Monday’s NBC psychic crime drama Medium featured a plot line in which an Arizona state senator and former POW is discovered to be a two-time murderer and a cannibal.

While it is safe to assume that the story was written before the Hollywood writers’ strike, and before the rise of John McCain to front-runner status for the GOP presidential nomination, the parallels to McCain’s personal history as a U.S. Senator from Arizona and Vietnam POW are obvious.

In Monday’s episode, titled “Aftertaste,” the medium (“Allison DuBois,” played by Patricia Arquette) suspects an ex-POW Arizona state senator is involved in a murder she sees in her dreams. Through a series of psychic flashbacks, she discovers that the senator (“Jed Garrity,” played by Greg Itzin), as a young Army captain held by the North Vietnamese, proposed to his cellmates that they kill and eat a dying American soldier rather than starve to death. “Garrity” drew the short straw and committed the actual murder himself by strangling the dying soldier.

In the present day, “Garrity” and three of his ex-comrades become fearful that another survivor, “Gordon LaRoche,” is going to go to the media and reveal their dark secret, so “Garrity” again convinces the group that they have to kill him. The group kills “LaRoche” and dismembers him, with each burying a piece of the corpse. One of the other men is confronted by police, and confesses that he committed the murder by himself, so “Senator Garrity” is not held accountable, although in the final scene “Allison DuBois” does confront him about his guilt.

The end of the story gave Medium writers the chance to dabble in a study in moral relativism. “Garrity” is about to endorse “DuBois’s” boss as he steps back into political life. “DuBois” knows that her boss wants to get back into politics and it is the only job that will make him happy. When she confronts “Garrity” about the killing he reframes the story back to her and states that all of the men involved in the murder were actually better men than “LaRoche.” Why? Because they had all made something of their lives, and by so doing honored the “legacy” of the man they ate while prisoners of war.

Garrity: But let me make sure I've got your story right. A long time ago, a soldier died so that the men he served with could survive. My guess is they were probably aware of the burden that the death of Michael Rhoades placed on them. Who knows? Maybe they even made anonymous contributions to the family of that poor, dead soldier. Seems like the least they could do. If these men had any kind of decency at all, it seems to me that they would live their lives in a way that honored the sacrifice that made them possible.

DuBois: Don't expect me to sympathize with you. You gave up your right to understanding when you murdered Gordon LaRoche.

Garrity: Right. Gordon LaRoche. He's the sticking point here, isn't he? If you're right about any of this, he's the only one who made it out of that camp who didn't understand the legacy that Rhoades left behind. The only one who didn't hold himself to a higher standard. In fact it sounds like you think LaRoche tried to exploit that terrible time for his personal gain, and he tried to drag the rest of those survivors down into the mess he had made for himself. Would I be sorry that someone like that was gone? Not at all. He wasn't worthy of the life another man gave him. Now, if you'll excuse me, Allison, I have to go help put your boss back in office. A man I happen to believe will do a lot of good. A man I believe will help you do a lot of good. And that's all most of us want, isn't it? A chance to do something good with the time we have.

“Garrity” then spins on his heel, shakes hands with “Dubois’s” boss and they both go before the public to announce the endorsement. “DuBois” is left looking shaken and uncertain, as if her convictions about the senator’s guilt were baseless. Further, her uncertainty is almost palpable with a haunting piano melody that underscores the scene. The unwritten and unspoken message is clear: the Arizona senator and ex-POW is sleazy and opportunistic.

Of all the possible professions the writers of Medium could have given the villain in this storyline, the choice of paralleling McCain’s resume reeks of political game playing and Hollywood bias against Republicans. Can you imagine the outrage if the villain had been modeled on Democratic presidential candidate Barack Obama?