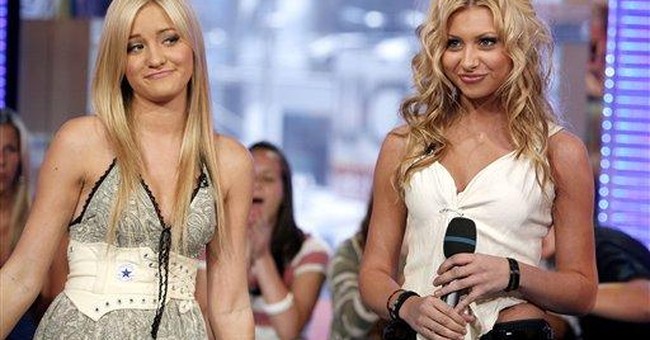 According to a new MTV/AP survey, Americans aged 13 to 24 value time with families, friends and loved ones above all else. They hold traditional values in high esteem. They want to get married and have kids. The majority say religion and spirituality are important.

Sex is really far down on the list of what makes American youth happy, it turns out. In fact, the survey finds that sexually active 13 to 17-year-olds report much lower levels of happiness.

So what does MTV choose to broadcast?

In a 2004 study of 171 hours of MTV programming, the Parents Television Council found 1548 scenes containing 3056 depictions of sex or various forms of nudity. That averages out to nine sexual scenes per hour with approximately 18 sexual depictions and 17 instances of sexual dialogue or innuendo. Ratings indicate that 75 percent of teens watch MTV.

The disparity raises an obvious question: Will MTV pay attention to its own survey and change the way it does business so that its programming will mirror what teens say really matters?

The seven-month MTV/AP study of more than 1200 respondents looks at happiness among people aged 13 to 24. Are they happy? What makes them happy? What are they doing to ensure future happiness? For the most part the study shows that American youth are a content lot, though there are differences among the races. (For a copy of the full study, click here to view the PDF.)

The most striking findings, given that the study comes from MTV, regard what kids value. Parents are seen as an overwhelmingly positive influence in the lives of most young people. Remarkably, nearly half of respondents mention at least one of their parents as a hero. When asked "What one thing in life makes you most happy?," 46 percent of respondents say spending time with friends, family and loved ones.

None of this is reflected on MTV, though. Tune in at any given hour and you won't see parents portrayed as positive role models. If people with strong religious convictions appear at all, they are usually treated as foils for sexual hijinks. But sex? When it comes to sex, it's everywhere.

The press release announcing the study's findings states, "MTV has an esteemed research pedigree and this study is part of the network's ongoing commitment to maintaining an unparalleled understanding of the youth audience." Sounds like wishful thinking.

Given this new study's findings, will MTV change its programming? Don't hold your breath.