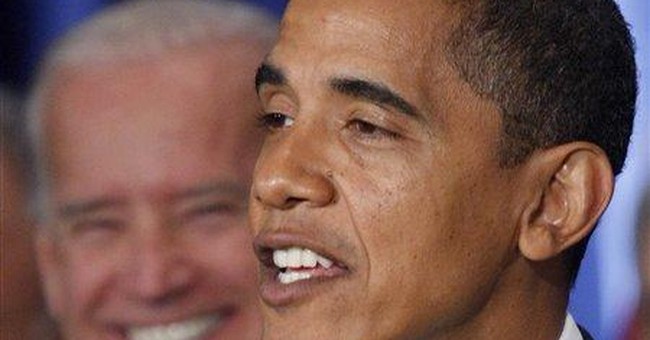 Trending
The people in his campaign have learned it, the people in his soon to be completed cabinet are learning it, and pretty soon the people who voted for him will learn it well: President-elect Barack Obama will be forced to begin saying things he's not used to. And while he won't have the surging throngs that have already forgotten most of what he promised, I still wonder what the long term impact will be on the people he promised full gas tanks and pre-paid mortgages to.
The process started really simple this week. People who had logged thousands of hours going door to door, driving people to the polls on election day, blistering the byways with last minute yard signs, and, in Philadelphia standing shoulder to shoulder to prevent Republicans from voting suddenly got a taste of the hope and change Obama had long since promised--he didn't have money to pay them for their work. Not surprisingly some of these thugs, er "campaign workers" took to shaking down the local offices. Not "Jesse-style" either--I mean actually shaking the office buildings.
Several hundred disenfranchised Obama campaign staff took to protesting right outside the doors of the local Obama office in Indianapolis. Some shrieked and screamed at the media, "I want my money today! It's my money. I want it right now!" Some of the 375 unpaid staffers were offered a $30 pre-paid Visa. (Word to Mr. President Elect, don't ever, ever, EVER promise fly credit and then walk, it's just not square homie.)
CARTOONS | Steve Kelley
View Cartoon
Just imagine how devastated that girl from the famous YouTube clip is. The one where she says she won't have to worry about putting gas in her car, or paying her mortgage, because if she helps him, he's gonna help her! (But I thought the bailout meant we don't have to pay for it anymore...)
No, Barack Obama made such outlandish promises on the campaign trail that buyer's remorse is going to set in soon. In fact, it may already have.
"Comedian" (and I do use the term loosely) Patrice O'Neal dialed the John Gibson show on Friday night to explain that Obama's election was nothing more than a propped up mechanism to falsely relieve "white guilt" over the idea that all white people are racist, and that they've now elected an "acceptable black man" so as to believe that America is now a post-racial nation. O'Neal went on to decry that Obama can't and never will be able to get "black America" to forgive "white America."
Man I'm glad that Obama's supporters took all that "one America" stuff to heart!
But if Obama can't make headway on a "chicken in every pot" or digesting most of Reverend Wright's racism left overs, he'll at least bring the troops home... right?
Have you noticed how since he's been getting his daily security briefings that the discussion of bringing the troops home completely disappeared from his public speech? It's also bankable that since he's begun to see the high-level advanced intelligence on what our enemies are doing abroad, he's regularly having to censor himself in private so as to not let all the profanity he knows be uttered in shock at what we're actually facing in the war on terror.
I know, very surprising coming from a man who believes that giving Americans basic Constitutional rights at birth is above his pay grade.
Look, Obama isn't even sure if redefining the word marriage is the right or wrong thing to do. Thankfully his supporters seem equally confused as at least 1.6 million of them in California, and perhaps even more than that in Florida voted to define marriage as it has always been defined.
Then there's his promise to give tax credits to everyone making under $250,000 (strike that), $200,000, (oops) $150,000 (uh...), $120,000 (shoot), $70,000... ah heck, he voted to raise taxes on everyone making $42,000 or more in annual income.
This week he held his first press conference, realized how big the economic challenges are, and began thinking, "is a tax increase really all that good of an idea?" He got so distracted by the thought that he wrongfully accused Nancy Reagan of speaking to deceased presidents, when in fact it was actually Hillary Clinton that had come closest to doing so. Mortified, he had to dial Mrs. Reagan up and express his apologies.
Being unable to deliver on his promises will amount to some pretty supreme disappointment. Of course, only those who keep up to date with what actually happens will know any of this. And by staying up to date we don't mean watching Katie Couric, BET, or MSNBC at night.
His advocation of yet one more huge bailout (the auto industry in Michigan) is unwise and he should forego even the thought of it. The auto industry is actually thriving in a number of other areas across the country. Perhaps Michigan's punitive tax codes should be examined as to what might make the region more productive.
The key to campaigns is sort of similar to the keys to relationships, "Under promise, then over deliver."
Obama's problem is that he could not have set himself up worse for the under/over equation.
"Yes we can!" may have been the flying, rainbow-excreting-unicorn promise of a political virgin, but starting on January 20, many will see Obama be forced to admit something he's not had to say in 24 months: "Um... well... uh... No we can't!"