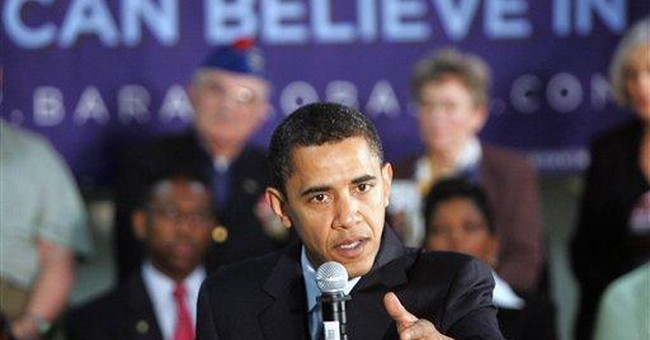 If William Jefferson Clinton was America's first "black" president, could it be that Barack Obama is positioning himself to be the nation's first "gay" president?

His supporters have argued vehemently for months that Barack Obama does not represent the interest of the radical homosexual activists. Chicago "South-side" radio talk show hosts declare with confidence that Senator Obama has said he would oppose the redefining of marriage to include unions that only the imagination could cook up. Obama has blindsided black clergy across America with the con-game that they should not worry about his views on homosexuality.

He has uttered a "Praise the Lord" at the side of Gospel uber-star Rev. Donnie McClurkin, who himself was sexually abused by a homosexual and thusly forced to struggle with the issue in his own life at times. Obama has gone from church rally to church rally making vague references to God's power, and God's purposes - while never defining one ounce of what any of it means.

Yet as someone who has followed his career since long before he was a national stage player, I have warned that his aggressive support for the radical homosexual activist agenda in America is a part of the overall picture of who he is.

In this way he may be more "gay" than Clinton was "black" - and by a wide margin at that.

For all the shell game that Obama was able to juggle in the run for President to date on the issue of his real, underlying views on the radical homosexual agenda - this week he removed all doubts.

In an alarmingly pointed written statement Obama signed his named to the personal promise of greater advance against the institution of marriage of any candidate to ever run for the highest office.

Pointedly so he gave his full pledge to overturn, or repeal, the federal Defense of Marriage Act.

"I also believe that the federal government should not stand in the way of states that want to decide on their own how best to pursue equality for gay and lesbian couples — whether that means a domestic partnership, a civil union, or a civil marriage. Unlike Senator Clinton, I support the complete repeal of the Defense of Marriage Act (DOMA) – a position I have held since before arriving in the U.S. Senate. While some say we should repeal only part of the law, I believe we should get rid of that statute altogether."

This act was signed by the last liberal President in office William Jefferson Clinton. In pledging to do so Barack Obama has now staked out turf that threatens the viability of the next generation of children that could subject them to an operative norm that would contribute to the de-constructing of families as to however one could imagine in one state - and then forcing recognition of that sexual union by its neighboring state regardless of what the citizens of that state say.

In pledging to overturn DOMA Obama seeks to remove state's rights, violate the principles of federalism, violate a major tenant of all traditional religious systems observed in America, and subject children to a quite non-healthy home-life. Studies of which have confirmed would have a detrimental effect on said children's scholastic, emotional, intellectual and physical health.

Yet the overturning of DOMA is merely the beginning of Obama's radical homosexual activist agenda.

For months supporters of Obama have written to me asking for evidence that he would do anything to advance or at the very least not stand in the way of the redefining of marriage. See at least Ted Kennedy and John McCain both made the argument in not supporting the Constitutional Amendment to Protect Marriage that it was unnecessary on the grounds that DOMA would prevent the cancerous spread of Massachusetts' Judicial Activism from roaming state to state. But for Obama this is merely too little activism, and it proceeds far too slowly for his own desire.

Thus in his written statement this week he argues publicly that states should be allowed to redefine the marriage laws in their state regardless of what research norms, the will of the people, or the common sense of healthy tradition have to say about it.

In doing so Obama displays a reckless commitment to play games with the future sexual formation of families and puts himself so firmly planted in the camp of anti-biblical views of truth, sex, and family that we have never seen its comparison in all years previous.

Make no mistake, committed Obama supporters share his uber-libertine leanings to homosexual behavior, and want to encourage more relaxation of traditional moral sexual barriers in society. And with academics like Dr. Judith Levine arguing in her book, and endorsed by Clinton Surgeon General Joyclin Elders, arguing that sex between adults and children is not harmful to the child - one can easily imagine what such relaxation of rules would lead to.

I was the first pundit in America to predict that Barack Obama would be president in 2009. A prediction, I admitted at the time, pained me greatly. Nothing that has happened in the nomination process of either party has caused my five underlying conditions for his victory to be erased. With John McCain as the GOP nominee it appears my prediction is perfectly on track.

Yet I will not allow my prediction to come true without speaking the transparent truth that Obama is not a man of traditional values, nor is he a friend to families.

He may aspire to be many things.

Hey may also aspire to be labeled America's first gay president. He would without question be more deserving than "Clinton as 'black'" under even the kindest of comparisons.