When Liberals, Nutroots, and Terrorists Conspire 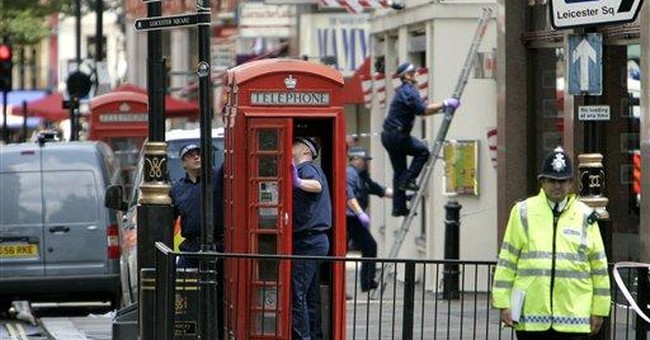 There seems to be a pattern amongst the left and terrorists. They work together. Whether they do so intentionally or not is irrelevant. The actions of one are given cover by the others and in the end - they are all working for the same team.

Take the attempted terrorist bombings of this past week.

On Friday, due to some very fortunate timing by a police officer and a set of parking garage attendants two massively huge car bombs were dismantled. And while the actions of those people are commendable - let's face it, the main reason that thousands of Brits weren't dead was due to the fact that the cell phone triggers had not worked. The numbers had been dialed twice in an attempt to set them off. It should also be noted that the original positioning of the two Mercedes coupes were set up in perfect Al Qaeda style, one to scare foot traffic down the street in perfectly delayed fashion to arrive near the second car just in time to absorb the blast.

The investigations are on-going but we already have a clear picture of the driver of the first Mercedes and we know he is linked to Al Qaeda. We also know that the original green Mercedes was spotted in Scotland a couple of days before, then in Birmingham (a hotbed of anti-west jihadism) and then pulling up in front of the "Tiger Tiger".

Speaking of Scotland the day following the double car bomb attempt, authorities placed men in custody who appear to be from southeast Asia. Jim Halpert would call them "Pakistinannies." These guys attempted to drive either a Jeep Cherokee or a Land Rover into Glasgow airport. Funny enough - they had propane tanks, and the smell of petrol emanating from their vehicle as well.

Of course none of these Jihdistinannies would be free to be roving the streets of of the U.K. were it not for some oh so brilliant liberal legislation that has identified them as dangerous threats to the welfare of the public but is not able to detain them. The Brits call them a "control order." Its the liberal's way of attempting to slap a terrorist on the wrist and then instructing them to go play nicely. When in reality what it accomplishes is the public release of Islamic terrorists who go right back to the building of bombs.

Each of the bombs over the weekend were estimated to hold 250 gallons of petrol, 8 canisters of propane, and 18-20 cases of carpenter nails. All legally accessible products and when combined could create a fireball that expands to over 400 feet in length in every direction.

So you're average jihadist is able to run around free as a bird, put together these rather conventional style bombs, and what does the left in America say?

Well as of press time for this column, none of the Democratic candidates for President had publicly addressed the matter. Most leftist media also shrugged it off. But their "nutroots" supporters were all over it. Posters at the Huffington Post, The Democratic Underground, and The Daily Kos web sites were already hatching 102 different conspiracy theories about how this was planned by the evil genius George Bush.

What was shocking in many of the posts at all three sites were the confessions by those who posted them, that they were, "just too cynical to believe these reports anymore."

In other words the freaks who live in these internet caves are more willing to trust the intentions of the "control ordered" Islamic killers, than they are of multiple confirmed reports from CNN, the BBC, and of course the major broadcast networks - none of which lean in any imaginary way in support of the War on Islamic Fascism.

The thing is - the killers know this. They know their rights under British law, they can argue their freedoms under the sanction of "control orders." They are attempting to persuade America to move in that direction and to end the detainments of jihadist psychos living in Guantanamo Bay, Cuba. Unfortunately the Supreme Court has expressed an interest in at least hearing them out.

What the nutroots, and the liberals did not even bother to investigate has to do with the timing of the attempted car bombings. British authorities knew that threats had been made. Previous attacks were carried out on important dates. Friday was the first day on the job for the Brits' new Prime Minister Gordon Brown. Perhaps even more importantly Al Qaeda may have been attempting to send a message to the jurors in the last London bombing case. The jurors were on their first day of deliberating the outcome of the last batch of murderous thugs who had been captured.

Whatever the motivation, one thing is still very clear...

Islamic Jihadistinannies want to kill free people, particularly free people who stand up to them.

Unfortunately liberals and the nutroots who support them are firmly on their side, passing laws to give the terrorists access, and conspiracies to cover their trails.

Ignoring the voice of these three groups is a global security matter. Detaining, monitoring the communications of, and keeping close track of where these dogs lie, and what they are up to is the only way we can insure both safety and freedom in the days to come.

And I would always prefer those odds, as to say, the pure dumb luck of a passing policeman or parking garage attendants!