Why 'THEY' fear Fred 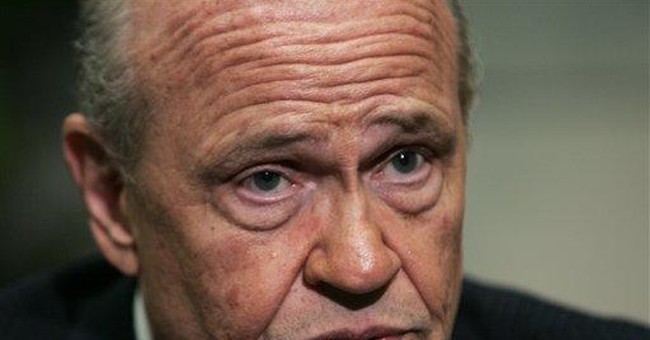 "They've" been hearing his footsteps for weeks. With each massive rumble the quake of the earth was echoed in their hearts growing more distinct with each stride.

While they have been yammering back and forth at mostly each other and the limited slice of America that is the politically active blogosphere, he took his folksy talk to the massive millions who listen to Paul Harvey. Oh but he's on the blog train too, posting on his own blog site, and leveling the playing field in political commentary by joining the ranks of the op-ed writers across America.

Ardent supporters of the other candidates at first dismissed him. The author of "Mormon in the White House" appeared on my show to bloviate on how Thompson just is more interested in playing talk radio than he is in grinding out the campaign trail.

McCain's folks watched his numbers surpass Romney months ago and thought to themselves, "Heh, he didn't pass us."

Giuliani's folks watched his numbers pass McCain weeks ago and thought to themselves, "Heh, he'll never catch us."

Today - all of the campaigns stand with jaw dropped, gaping at the latest numbers from Rasmussen, and the L.A. Times/Bloomberg polls which show him drawing even - for the lead - for the GOP nomination. And remember - he hasn't so much as given a single campaign speech, held a rubber chicken fund-raising dinner, commissioned the creation of a single television spot, appeared in a presidential debate, or even announced his candidacy.

So what's the draw?

Chalk it up to a heaping portion of old fashioned, southern deep fried, common sense, with more than a ladle full likeability, and topped off with a wink and a smile. He's also tough as nails, and when big daddy walks into the room - everyone knows it.

Yet I think it goes way deeper than this.

Evangelicals like him because he reflects their values and eliminates any need to even attempt to bridge the debate between Mormons and... well... Evangelicals.

The anti-terror vote likes him because while Mayor Giuliani may talk a tough game, nobody on earth thinks you could mess with Papa Bear. (He's even already articulated strategies towards Iran, North Korea, and the future of what is at stake in Iraq were the terrorists to win.)

Fiscal conservatives like him because he has the audacious understanding that in order to keep economic progress moving forward, unemployment at near record lows, highest African American ownership of homes in the history of our nation, etc. etc. - you must reduce not inflate taxes.

Border security types like him because he said what Washington refused to hear on the original debate over the amnesty reform bill in the Senate: "THEY DON'T GET IT! Secure the border through enforcement first, and then deal with the issue of who is here."

He's poked fun at Al Gore by demonstrating fact over consensus on global warming. He has also poked a bit of fun at the president of Mexico for trying to make "his citizens his nation's greatest export." He even called out Michael Moore by puffing cigar smoke right back in his face.

Unlike Hillary who went on a "listening tour" with voters who primarily told her what she wanted to hear, Fred is listening to the Hoover Institution, the Heritage Foundation, and TownHall.com readers.

He is the best communicator the GOP field has had in its ranks since Reagan ran for re-election. He is equally at ease with shoppers from Wal-Mart as much as a state dinner with Secretary of State Condoleezza Rice. (Who wouldn't be a bad Veep nomination for him.)

If you listen to all the insider talk around the blogosphere, talk radio, and the best sellers' lists you will find strategists who will give you a list of ten reasons why Fred Thompson wouldn't make the best candidate. (Most of the people saying these things of course already have ties or leaning strongly towards one of the candidates already in the field.)

The truth of the polls tells a very different story though.

If you want the toughness of Giuliani but can't take the baggage of cross-dressing, three marriages, anti-marriage, pro-abortion, and highly questionable on judges; if you want clear-headed straight talk of McCain - but without the frantic sometimes pathological mood swings, and someone who doesn't think political speech should be stifled - but encouraged; if you want the radiant intelligence, and clearly socially conservative positions of Romney - but are afraid to be called bigot for not feeling comfortable in voting for him, then for these reason's and a dozen more - Fred's your man!

By writing his weekly op-eds and coming directly to "We The People" Fred is willing to do something that the handlers of all the others have yet to really turn them loose to do - and that is - to give us a real slice of who they are. His communication style alone shouldn't be the reason that people vote for him. But for many they will want to even more so because of it.

At the end of the day if extremists know they will face the "wait and decide" responses from an Obama/Clinton administration vs. the "don't even think about it" presence of Fred in the White House - who do you think the terrorists would fear more?

For the GOP primary voters it’s all about National Security (hear the rumble...), keeping the economy strong (listen there it goes again...), and standing up for the social and moral fiber that makes America strong of spirit - and not just of might (even closer now...).

The rumbling footsteps are real. "They" hear them distinctly, and hopefully for America... soon... we will too!