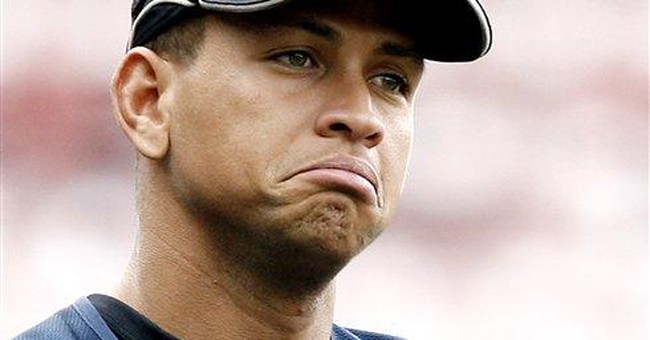 When is it ever allowable to observe a person's behavior and then draw conclusions about it, particularly as to whether such behavior is rational, moral, healthy etc?

Is it ever appropriate to give voice to those observations and conclusions?

For instance, this past week, New Yorkers got served up heaping portions of a superstar baseball player's adultery on the front pages of their newspapers. Alex Rodriguez was spotted coming out of a strip club with a "chesty blonde" that he has also been photographed with in several cities when away from the friendly confines of home. This week he was photographed not only leaving the strip club with her, but entering his hotel moments later.

In mentioning these actions on my radio show two interesting responses developed.

Women in large numbers responded with appreciation for discussing a topic that is now seldom even discussed from church pulpits anymore. The other reaction were self-proclaimed Christian men who insisted that I was being too harsh on A-Rod.

Two of the women who responded phoned my show anonymously but later revealed themselves to be wives of professional athletes who have faced or were concerned about facing the very same thing. They also expressed sincere thanks for allowing my listeners to chew over the implications of what adultery does - not just to the innocent wife left home, but to the children of that marriage, and in addition in A-Rod's case - every child that has read his children's book.

The male callers who criticized my coverage also ended up revealing some additional information to me. The most vociferous critics had themselves engaged in adultery. Interestingly enough they based their criticisms on the "speck and log" instruction from scripture. (Not to remove the speck from your brother's eye, until you had removed the log from your own.) The inference was that unless one has never struggled with the issue of lust in their own life then they are disqualified from casting criticism A-Rod's way. I also thought it was convenient that by attempting to disqualify me from discussing the issue of sexual morality - they themselves would not be forced to listen to such discussion, which might have in turn caused them to feel a twinge of conviction on the issue.

A-Rod's statement to the press: "It won't be a distraction" to the team, or himself. Which is all well and good, but any thought about how Mrs. Rodriguez might feel about it?

And so, the unspoken code of standards regarding players' personal lives has been irrevocably broken and we can only assume, from here on out, it's open season on any and all who would dare to have the same lack of discretion as A-Rod. For 100 years, it was left unsaid that whatever ballplayer behavior you witnessed off the field.. was off the record.

The simple message: "shut up and let us do what we want to!"

That also sounds vaguely like what President Bush was saying to those of us who have observed some bizarre behavior recently emanating from the White House.

This week the President went on the offensive against his most strident supporters, and in doing so attempted to destroy the conservative coalition that handed him the presidency - twice.

Accusing those of us who simply want our borders secured of being racists, he added insult to injury. When our own U.S. Border Patrol confirms for us that more than 800 persons of Middle Eastern origin have been caught since January of 2003 on our southern border, I disagree with the President that this is a racially motivated concern.

While the Wall Street Journal editors sit around laughing at the silly people of "the Right" and declare that critics of the present bill do so for "culturally biased reasons," we real world Americans wonder what number of terrorists have slipped into the country if Border Patrol has stopped 55 persons on the southern border who have direct ties to terror groups since January of 2003.

We everyday folk think the current provisional amnesty bill needs to be stopped, but because we do the President says we are part of what's wrong with America. And when he says that we a trying to "frighten people into opposing the bill" all we are really doing is to help the beltway understand that this bill will destroy the nation that we love.

By accusing us of being isolationists (especially when we are not arguing for limits on legal immigration) the President is making the case for our nation's vulnerability.

President Bush those who have stood by you longest were appreciative of your leadership through 9/11. You have fought a brave fight to keep us safe. Yet your refusal to allow the grateful citizens of this country to voice our concerns at legislation we understand better than its authors is akin to being beaten by one's husband and told to be glad about it.

I'm sorry Mr. President, if you choose the comfort of your own "chesty blondes" like John McCain and Ted Kennedy, there's not much we can do to stop you in going down that road. Though the Wall Street Journal may grant you cover for policies that are legitimately negative to America's future as a sports writer covering for an infielder's infidelity, there is nothing in our agreement with you that says we have to show up at the press conference smiling and looking pretty while you sign autographs.

Adultery hurts everyone involved, and when it is engaged in while attacking those who have been faithful - it comes served up with extra sting.