Why Rudy is Striking Out... 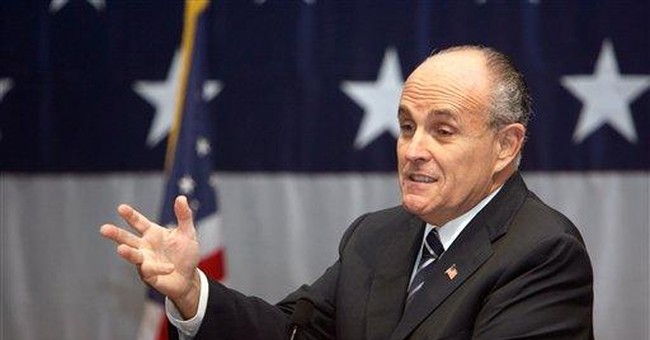 Mayor Rudy Giuliani intended to use the chance to address students and faculty at Houston Baptist University on Friday to boost his image and clarify his position - particularly on abortion. He also hoped to energize what is beginning to look like a campaign that is in complete meltdown.

He failed on every level.

Coming out of the first Presidential Candidate debate he was established as the clear loser in many respects. His mumbling, stumbling, bumbling and shrugging of the shoulders on the simple question put to him on the issue of Roe v. Wade truly isolated him from the rest of the field.

He is also bending believability.

In his address at HBU on Friday he took more time than I had heard him use in the past to describe the "two pillars" of his thinking on the matter.

The first pillar is his supposed personal belief that abortion is "deeply, profoundly, and always morally wrong." He belabored the point by emphasizing that if he were to counsel someone personally, that he would always advise them against abortion and would encourage them to have the baby. Once born, if they were unable to care for it, he would encourage them to consider the adoption option.

His second pillar was his belief that our society "must always grant the woman" the "right to make the choice". He didn't really elaborate on the specifics of what they would be choosing, but we are to assume that the choices are somewhere between the "always morally right" decision to have a child, or the "always immoral" decision to kill one.

The Mayor continued by addressing the issue of partial birth abortion. He added that he felt it should have been kept legal to protect the life and health of the mother. Interestingly enough the American Medical Association has denounced this method of ever being medically necessary to "save a woman's life." And the word "health" could be interpreted as lightly as "mental health" which could be interpreted as lightly as "I just don't FEEL like having this baby" which you then realize is in fact a term that means nothing.

Giuliani also seemed to imply that he opposed federal funding for abortion as part of his "giving the woman the option."

He then pledge to work to limit abortions, put restrictions on them, and for added good measure he bragged that adoptions went up under his administration in New York by some 130%.

The problem was the entire pretense of Giuliani's position on abortion is a sham, at least the side of viewing it as "always morally wrong." Moments before he was to give the address in Houston, Fox News Channel's Carl Cameron did a cut-in with an exclusive discovery. Cameron had uncovered a National Abortion Rights Action League (NARAL) Survey that Giuliani had filed with them in running for office back in 1997. In the Mayor's own handwriting exists the proof that Giuliani opposed parental notification, and any limits on the always unnecessary procedure of partial-birth abortions. He also advocated more federal funding for abortions. He has also given multiple donations to the racist genocidal organization that was founded upon the desire of eliminating blacks - Planned Parenthood.

Discerning people don't even need the evidence of a NARAL survey to see through Giuliani's ineptitude on moral issues. His stated "pillars" tell us everything we need to know.

With the discovery last week that gender can now be identified in the unborn child only six weeks after conception, coupled with the increasing abilities to see a child survive to a healthy life outside the womb, earlier and earlier in the pregnancy, the issue of personhood continues to be Giuliani's downfall.

Since he was in Houston, let's use a local example.

Many remember Andrea Yates who systematically drowned her five children in her own bathtub. Certainly Mayor Giuliani would share our horror and condemn such actions as "always morally wrong." Surely he would have - had he been given the chance - to counsel Andrea to not go through with such a procedure. He would have attempted to convince her that it would be better for the child, and for her to give those children up for adoption. There is no doubt in my mind that he would have even called for police intervention had he been able to divine ahead of time her intent to murder her children.

But by using the Mayor's own logic and his "other pillar of thinking" he would have felt that it would have been equally important to "give her the option, to make the choice" to carry out her plan.

This is where Rudy's logic is so flawed that it defies explanation. And it is this confusion in the arena of moral clarity that calls into question his ability to be morally clear in his governing skills.

The problem with his two pillars is that even Rudy Giuliani doesn't fully believe them both. It is also obvious from his record which of the "two pillars" he believes, and which one he is now giving lip service to.

If he wished to disprove this and in fact attract genuine pro-life voters let me propose a specific tactic for his campaign. In his discussion of "compromise" and the need to hold to his "two pillars" how about this:

Propose sweeping legislation to ban all abortions with the exceptions of rape, incest, and the mother's life.

This compromise would eliminate roughly 98% of all abortions performed, and even though we truly pro-life types would still work to ban the remaining 2%, it would allow the "needed exceptions" that the Mayor espouses are "so important."

Rudy Giuliani is the most full throated pro-abortion Republican candidate for President in history. In all transparency he must be acknowledged as such.

Rudy's poll numbers are sagging in Iowa and New Hampshire, and without radical change in his thinking those trends will hold, and somewhere around South Carolina the Mighty Mayor will strike out.