Why do Democrats crave defeat? 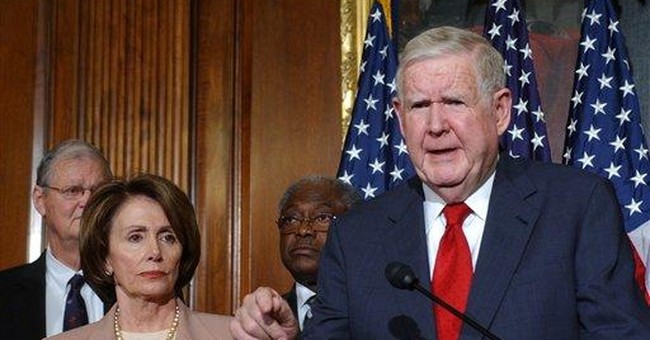 Please explain something to me. What is this obsession that liberals have with seeing America destroyed?

Why are they so intent on humiliating their fellow citizens? And why don't they have at least some modicum of pride about the greatest nation the world has ever produced?

In other words, why are they so insistent on seeing America pummeled?

It is clear from the way they recoil when someone refers to them as "anti-American" or "unpatriotic" that there is a piece of them (however insignificantly tiny) that does not wish to be classified as such.

But I cannot for the life of me comprehend why they are so offended. It seems to me that if you love your country, that you love it most when it faces its toughest challenges. But this is not the case with John Murtha, Nancy Pelosi, Rahm Emmanuel, and the other 215 that first authored, then voted for, the bill that would hand over victory to the terrorists we have been battling so hard to defeat since 9/11.

In their own echo-chamber vanity Murtha, Pelosi and company believe themselves to be smarter than the commanders of the operations in the war on terror. And they believe that we will sit mesmerized, like sheep, while they single-handedly attempt to give the terrorists a date for victory - August 31, 2008.

But they didn't just author defeat - they campaigned for it.

Only a day or two earlier the "let the terrorists win" bill looked like it was in deep trouble. Some of the more socially conservative blue-dog democrats argued that it would not play well to the average citizen to be authoring a bill, and to hold hostage the paychecks of the men and women in uniform over the issue of when we give victory to the other side.

And that is when the $96 million dollar supplement began to expand like Murtha's waistline. When it was finally passed it had ballooned to nearly $124 million.

Now don't get me wrong - I think that spending more on defense is nearly always a good thing. The problem with this evolving spending measure was that it was all about the pork. The additional $28 million added to the bill was the price of all the "gimmes" that Democrat leadership was forced to pony up just to bribe, er... buy, scratch that... secure the reluctant congressional members’ votes. And by increasing the price tag by more than an additional one fourth of the monies of the original supplement, they were only able to get 218 votes - the barest of bare minimums to get the measure passed.

So not only did the Democrats author a resolution that called for the terrorists to claim victory on August 31, 2008, not only did they twist arms of lower ranking members to get them on board, now they were willing to spend the money that you and I are sending them by way of our tax bill - to fund the effort to buy congressional members' loyalty to the concept of the terrorists winning.

Am I the only one in America that thinks this is truly, dastardly, diabolically - sick?

Personally I believe I work far too many hours, for not nearly enough money, to be paying the exorbitant amount of taxes - to only have them be used against the safety and welfare of my family.

How do these people sleep at night?

It is one thing to attempt to a have a philosophical position that spouts platitudes about the violence of our world. It's another to be against war as a general principle and long for the day when conflicts can truly be decided by judgment and fair play.

But when we have sinister forces on earth that seek our destruction and we have members of Congress who instead of representing the safety, security, and freedoms of America - decide instead to take our own income and bankroll our future destruction, then somebody, somewhere has to say something!

Fortunately we have a President who will have the judgment to veto this measure. But I am still greatly disturbed by the fact that the "People's House" of those who represent us, are so eager to wave the flag of surrender. They could not telegraph any more precisely how they would like to see us lose, and the terrorists win, than by putting a date on a piece of legislation for total terrorist victory… And they did it before our watching eyes.

It is unwise to believe that 218 congressional members know more about the situation on the ground than the commanders who serve us without political bias or corruption.

It is unsafe to surrender the type of staging ground Iraq would become if we were to leave the terrorists there unmolested and undefeated.

It is un-American to act in the interest of our enemies.

It is unpatriotic (against one’s love for one’s own country) to legislate, campaign in favor of, and bribe representatives to vote for defeat.

And it is unacceptable that Democrats spit on “We The People” in this fashion.