"How Dare He Speak!" 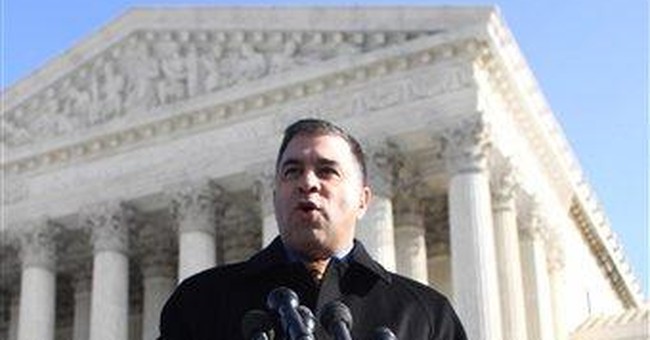 The ink isn’t yet dry on January’s landmark Supreme Court campaign finance decision Citizens United v. FEC, and already Round Two has begun. As new legislation is planned to limit political speech and some even call for a constitutional amendment, the courts are addressing the next round of constitutional challenges.

The laugher in the courtroom to Chief Judge Sentelle’s question made it clear that everyone understood that Citizens United was a game-changer, and that the Obama administration was now on the defensive regarding its ability to control political speech.

But the core issues in SpeechNow remained the same, issues about current federal law that need to be answered in the wake of Citizens United. Those questions are: whether the federal law requiring groups to file detailed reports about their contributors when they receive money—as opposed to filing reports only when those groups spend money—is constitutional, what sort of limits on contributions are constitutional, and also whether the registration requirements for political organizations are constitutional.

These questions come on the heels of the Supreme Court’s decision in Citizens United, which vindicated the First Amendment by holding that individual citizens have the right to join together in organizations to pool resources and coordinate activities to speak out during election season.

In Citizens United the Court rightly recognized that the government’s claim to censor political speech from any corporate entity would include the media, since almost every TV and radio station, as well as newspapers and magazines, are corporations, and therefore could be silenced by the government under this law.

Contrary to what President Obama said, this did not overturn 100 years of law. Before 1989, the Court had always said that people speaking through corporations had the same free speech rights as if they were speaking alone. In Citizens United, the Court took the law back to what it has always been before the 1989 decision Austin v. Michigan Chamber of Commerce, which first allowed bans on corporate political speech.

The oppressive nature of government regulation of political speech came through in the SpeechNow arguments. Since groups need money to buy TV or radio ads or to gain access to other outlets to reach voters, the courts need to wrestle with these fundraising issues. After all, now that the government cannot ban corporate groups such as the National Rifle Association, the Family Research Council or the American Civil Rights Union from speaking, it could try to choke off their political speech by imposing severe burdens and limits on groups’ ability to raise money to speak.

Unfortunately, SpeechNow’s lawyer kept failing to answer questions posed by the court’s conservative judges. In law school you’re taught always to be responsive to judges. This is especially true when the judge is favorable to your point of view, because otherwise you risk alienating the judge. SpeechNow’s lawyer wasted half of his oral argument time trying to evade friendly judges’ questions, to the increasing frustration of the court.

Despite these missteps, the FEC’s lawyer ran into a brick wall when it was his turn to speak, trying repeatedly to assert arguments that the judges pointed out had just been rejected by the Supreme Court in Citizens United, reading various sentences from Citizens United that shredded what the FEC was arguing.

Seeming desperate, the FEC lawyer tried to lay out what the Obama administration considered the terrible consequences of a person giving money to different groups without the government being able to track who he was, what he was doing or how much political speech he was funding.

“How dare he speak!” Chief Judge Sentelle exclaimed with a smile, to an outburst of laughter in the courtroom. Everyone of course understood Sentelle’s point about the role the FEC was claiming for itself to control public discourse. In case anyone missed it, however, Sentelle followed up with the comment, “You don’t seem to think much of the First Amendment.”

Evidently sensing he had reached the end of the line, the government lawyer indicated that he had little choice, saying, “I’m [just] defending the Act, Your Honor.”

In the end, the court seemed split on the contribution limits. The judges also didn’t seem completely opposed to the reporting requirements, and SpeechNow’s lawyer clearly failed to persuade the court why it needed to strike down the group registration requirements.

SpeechNow.org v. FEC shows that there are still many First Amendment issues regarding federal law that the courts need to address, and may be the next campaign finance case to go to the Supreme Court. A decision from the D.C. Circuit should come down by this summer.