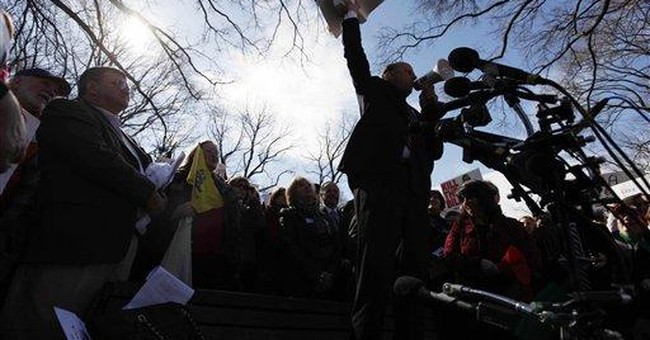 Trending
It's been almost a year since America's Tea Party protesters first gathered to voice their opposition to Washington's profligate ways.  What began as a loosely organized campaign against government spending has evolved into a highly motivated, highly organized, politically potent movement determined to restore American government to its proper constitutional sphere.

As it's become clear that the Tea Party movement represents an existential threat to business as usual for Washington elites and their handmaidens in the mainstream media, the campaign to discredit the movement has gone into overdrive.  Tea Party activists were first dismissed as "astroturf" – mere puppets for a shadowy GOP "machine."  When this strategy failed, folks like Nancy Pelosi attempted to smear the movement with the taint of bigotry, tearfully invoking memories of her days as a freedom fighter in 1970's San Francisco.  Despite the blatant phoniness, not to mention rank hypocrisy, of this stunt, the strategy of painting the Tea Party as a front for racists, extremists, revolutionaries, and radicals has persisted.  The prominence of Sarah Palin – the Left's favorite Republican punching bag – as an advocate and de facto spokesperson for the movement has added additional fuel to the fire, opening the way for accusations that Tea Party participants are ignorant hayseeds motivated, again, by latent racism.

Thus, as the base of support for the Tea Party movement broadens, the powers that be are doing everything they can to scare people away.  Who, after all, wants to be smeared with accusations of racism, or worse, sedition?

But despite what Nancy Pelosi and others would have us think, the Tea Party movement is not merely a kooky band of right-wingers out to bring President Obama down.  On the contrary, the demographic composition of the movement is an almost exact reflection of the American population.  This dynamic mix of Republicans, Democrats, and Independents from diverse socioeconomic and racial backgrounds has come together to send the message that enough is enough.  The increasing desperation of the Beltway pols and Manhattan media pundits to discredit the Tea Party movement is the best possible indicator of its success thus far, and more importantly, a hopeful sign of its potential to effect real and lasting change in American politics.

For those that would welcome such change, one looming question remains: Will the Tea Party coalesce into a true political party, or will it remain primarily a grassroots movement that prefers to retain its current "rogue" status?   Only time will tell.  One of the things accounting for the Tea party’s current popularity is its identity as a phenomenon born outside of the entrenched special interests to which both major parties are beholden.  Millions of Americans who have grown disenchanted with politics as usual on both sides of the aisle would enthusiastically support a Tea Party option at the ballot box.

Nevertheless, for the movement to succeed in the long term will require something that neither the Democrat or the Republican party has much of these days: Integrity.

For Americans to be able to look to a party that clearly articulates what it stands for and what principles it believes in, and for the leaders of that party to actually live by those principles, would be truly revolutionary.  To be able to trust that our elected representatives say what they mean and mean what they say would do much to lift the cloud of suspicion and mistrust that currently hangs over our nation's capitol.  For a party to place principle above pragmatism – even if that sometimes means defeat at the ballot box – would be unprecedented in American politics.  For aspiring political leaders to take their charge as the people's representatives seriously, and to strive to live lives, both public and private, that are above reproach, would go a long way toward restoring our faith in this republican experiment called the United States of America.

Would it be too much to hope that the Tea Party movement might give rise to a new generation of true American statesmen, in contrast to the self-serving, power-hungry charlatans currently running our government?  If so, whether under the banner of a new party or leading a charge to reform the existing ones, here's hoping many such revolutionaries come, and come soon.

Why the Chances for a Republican Senate Takeover Just Increased Dramatically
Townhall
'Brokeback Mountain' trends as Variety explains that white homophobia doesn't fully account for 'Bros' bombing
Twitchy
Ye and Candace Owens Sport 'White Lives Matter' T-Shirts, the Left Melts Down
Redstate
The GOP Must Capitalize on the Huge Opportunity in Front of Them With Hispanic Voters
PJ Media