Sizing Up the Candidates 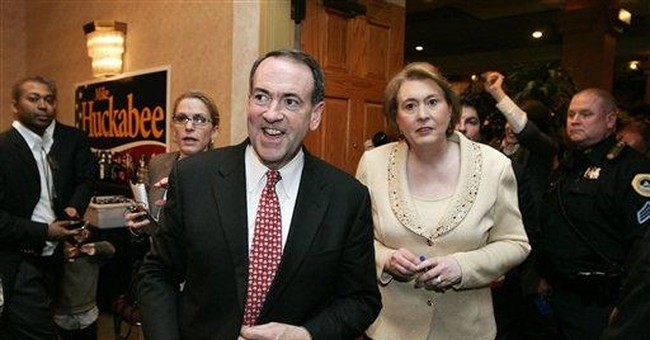 Iowans have spoken about their preferences for the nominees of the Democrat and Republican parties, but the rest of the country has yet to have its say. Not all of the candidates received a ticket out of Iowa, so the field has been winnowed slightly. Following the New Hampshire and South Carolina primaries, the herd will have been thinned even more. As Americans increasingly turn their attention to the primaries, here are some thoughts and questions that may be useful in informing their judgment about who to support for the office of President of the United States.

Ability to cast a vision. Americans are sharply divided about the direction in which the country should move. The country is divided over polarizing issues like abortion, immigration and Iraq. Many of the candidates foster existing divisions by demonizing their opponents and engaging in personal attacks. These attacks are calculated to anger their supporters and animate them to turn out and vote. Anger is certainly a good motivator, but it is not a conciliator. And it is not likely to produce a consensus about the direction in which the country should move. Is there a candidate who is capable of healing divisions, articulating first principles and uniting the country? It was said of Winston Churchill that he "mobilized the English language" in support of the war effort against the Axis powers. Do we have a candidate capable of mobilizing the English language in such a way as to unite the American people in pursuit of the common good?

Making the case for life. The right to life is the foundation of all other rights. It is that right without which no other right can exist. Unless one's right to life is preserved, all other "rights" are meaningless. One's net worth is not a function of their age, size, location or stage of development. Human beings have dignity because they are created in the image of God. Is there a candidate with a demonstrated record of protecting the rights of human beings at all stages of development? Is there a candidate who can credibly make an appeal for a consistent life ethic which includes protection of the embryo and the elderly? Does the candidate understand the basis for human dignity? How has that understanding affected their decision making in the past? Can they defend the innate sanctity of human life against the biotech industry's utilitarian appeals for embryonic stem cell research and human cloning?

Defending marriage. Marriage has historically been the union of one man and one woman. It is the foundation of society and the best vehicle for propagating and raising children. Nevertheless, the institution of marriage has fallen on hard times. The divorce rate has exploded, cohabitation has increased and out-of-wedlock births have skyrocketed. The institution of marriage is also under assault by radical homosexual activists who wish to redefine it. Is there a candidate who can make the case for heterosexual marriage without reverting to gay bashing? Can they explain credibly why marriage is an institution that should be favored in the social policy of this country? Does the candidate's personal history reflect that they value marriage and family in word as well as deed?

Caveat: Voters should not be under the illusion that a federal marriage amendment (FMA) will be the silver bullet that will save marriage in this country. Passage of such an amendment will be problematic in that it requires supermajority votes of members of Congress and of the states. More than 2000 amendments have been proposed to the Constitution, yet only 27 have been adopted—a testament to the difficulty of passing constitutional amendments. Moreover, there is no reason to expect that activist judges who have a history of ignoring the language of the Constitution and the intent of its Framers will show any more regard for new language which is inserted into the document. Nevertheless, there are many steps which can be taken in law and policy which will have the effect of protecting and strengthening marriage and do not require the supermajority votes of the Congress and of the states. Do the candidates have any proposals other than the FMA to protect marriage?

The Judiciary. Who the President nominates to the judiciary is of grave importance. Long after a President leaves office, the judges they have appointed remain. What kind of nominees will the candidate appoint? Will they appoint judges who strictly construe the Constitution or ones who believe it is constantly "evolving"?  Will the intent of our Founders prevail or the political whims of today? Will their nominees respect the sanctity of life or is "convenience" their litmus test? Does the candidate understand the concepts of separation of powers and Federalism, and will they make sure the judges they nominate do as well? Will the candidate defend their nominees against the inevitable smear campaigns? When sitting judges overstep their constitutional bounds and usurp the power of the legislative and/or executive branches, will the candidate confront them and publicly reproach them for their usurpation?

Immigration. Does the candidate have a credible and workable plan for securing America's borders? What length of time will it take to put such a plan in place? What will it cost? Does the candidate have a viable plan for dealing with the illegal immigrants who are already here? What does that plan involve? Does it include a path to citizenship for such people, or will they be sent back to their native land? What plan does the candidate have for the children born in the U. S. to such illegals? How will they be accommodated if their parents are sent back to their native land? What actions will be taken with respect to employers who hire illegal aliens? If not with immigrant labor, exactly how does the candidate plan to offset the loss of workers caused by America's aging population and its low birth rates and high levels of abortions?

Social Security and Medicare.  The long term viability of Social Security and Medicare is in doubt. As a consequence of the graying of America, expenditures for both programs will soon exceed revenues. The ratio of workers to retirees has slipped from 15 to 1 in the 1950's to 3 to 1 today. Younger workers will be in increasingly short supply in the future due to low birth rates and high abortion rates. They will chafe at the increased burden of supporting an ever burgeoning cohort of older and economically unproductive Americans. What concrete proposals does the candidate have for dealing with the looming crisis involving Social Security and Medicare? Will they cut benefits for older Americans? Increase taxes on younger Americans? Create new vehicles to invest for retirement?

The War on Terror. What vital interests does the candidate identify as being at stake in the wars in Iraq and Afghanistan? What role does U.S. oil consumption play in our engagement in the region? How does the candidate define our mission in Iraq and Afghanistan? What objective criteria will they use to determine whether our mission has been accomplished? What factors should influence the United States' decision to intervene militarily in other parts of the world? What will the candidate do to bolster our sagging military resources? Is a draft in order? If not, how will recruitment be bolstered? What specific steps will be taken to blunt the spread of Islamic fundamentalism which threatens Western security and values?

These are just a few of the questions Americans should be asking the candidates who aspire to leadership of the free world. Voters should insist on straight and specific answers. They should reject answers that are couched in vague generalities. Candidates who advocate "change" should be required to indicate with precision the nature and types of changes they intend to make and to demonstrate why they ought to be the preferred agent of change. Candidates who tout their "experience" should be required to indicate how that experience qualifies them to address specific issues of concern to the voters. They should also be required to demonstrate how their record of experience matches their rhetoric in the campaign.

Undoubtedly it will require effort on the part of voters to get answers to these and other questions. If candidates are not forthcoming, voters should withhold their vote. Answers ought to be the medium of exchange. Good looks and smooth talk ought not to be enough. If we don't get their answers now, we may not like what we get later.