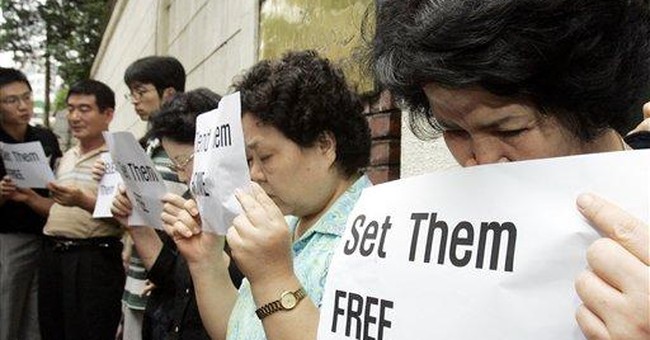 "For the message of the cross is foolishness to those who are perishing, but to us who are being saved it is the power of God." (1 Corinthians 1:18)

Foolish. Naïve. Downright stupid. That is how some have described the actions of a group of South Korean missionaries who went to Afghanistan to give humanitarian aid and to preach the Gospel. On July 17, members of the Taliban captured twenty-three of the missionaries and held them hostage, demanding the release of eight Taliban prisoners. Two of the twenty-three missionaries have been killed, with more deaths to come unless the demands of the fundamentalist sect are met.

Why on earth would men and women leave the comfort of their homes and the safety of their homeland to put their lives at risk in order to aid strangers in a foreign country? For many it's hard to fathom. But for Christian missionaries throughout the ages, it can be summed up in two words: "Love" and "Obedience." Love for Christ and for their fellow man. Obedience to the Great Commission. After Christ's resurrection and before his ascension into heaven, Jesus commanded his followers, "Go and make disciples of all nations, baptizing them in the name of the Father and of the Son and of the Holy Spirit, and teaching them to obey everything I have commanded you." (Matthew 28:19-20) Through the centuries, Christians around the world have ventured into hostile territory in obedience to their Lord's command. Motivated by their love for Christ and their fellow man, they have endured hardship and put their lives at risk to preach the good news of the Gospel to those who have not heard it. They deem that nothing less than the eternal destiny of souls is at stake and, thus, they are willing to sacrifice their own lives in the hope that those who hear will respond in faith and, thereby, gain eternal life. They follow the model of their Savior who sacrificed his own life that others may live.

The rejoinder of Christian missionaries to those who see their actions as foolish was best expressed by Jim Elliot, a Christian missionary who, himself, was slain while ministering to the violent Huaroni Indians in Ecuador. While in Ecuador, a few years prior to his death, Elliot wrote these words in his journal: "He is no fool who gives what he cannot keep to gain that which he cannot lose." For Elliot, the risk was outweighed by the return. The prize was to hear the words, "Well done good and faithful servant. You have been faithful over a little; I will set you over much. Enter into the joy of your master." (Matthew 25:21)

The impulse which animates these Christian missionaries to put their lives at risk is very different from that which animates the Islamic fundamentalists who are their captors. While Christ told his followers to love their enemies and to do good to their persecutors, radical Islamists see the infidel as an enemy to be destroyed. Their form of the "Great Commission" is the killing or conversion by the sword of all unbelievers. Their goal is only met in a worldwide Islamic state, where any who differ deserve death. The difference between Christianity and radical Islam could not be drawn into sharper contrast than in the current hostage situation.

Sadly, the voice of the Christian community appears to have been muted in protesting the outrage perpetrated against these South Korean followers of Christ. Bobby Welch, Strategist for Global Evangelical Relations for the Southern Baptist Convention has rightly declared, "Too many for too long have said too little in times like these." Welch is right. Our silence must end. These men and women deserve the praise and prayer of every Christian. Their captors deserve our condemnation.