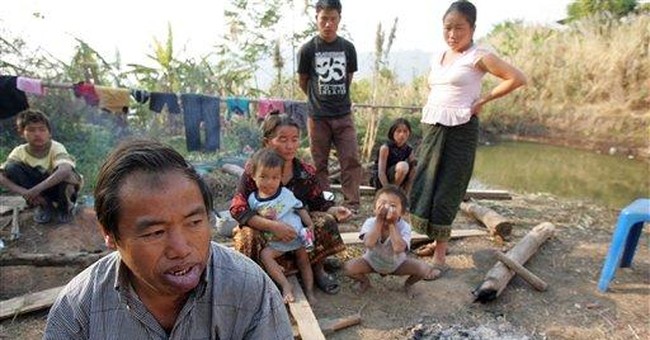 Success in politics depends on the ability of a candidate or a party to forge and maintain coalitions. One of the most successful coalitions in modern political history has been the "Reagan Coalition", which brought together economic and social conservatives under the umbrella of the Republican Party. Preserving that coalition brought the Republicans great success, including occupancy of the White House and twelve years of control over the House of Representatives. The coalition that Reagan fashioned is fraying, however, and is on the verge of unraveling. The causes are many, but the coup de grace is likely to be the current controversy over immigration.

At first blush, the union of economic and social conservatives seems an odd one. The most influential among the economic conservatives are the "blue bloods". They are fiscally conservative, but often socially liberal. They enjoy the trappings of money and power and see politics as a means of increasing both. Consequently, they invest in political campaigns as a "cost of doing business", expecting that if they ride the right horse across the finish line, they will get a "return on investment" which usually comes in the form of tax breaks, financial subsidies, or limited accountability for their misconduct. Cash is the currency of the rich and powerful, and they do not hesitate to invest it in political campaigns. Financial concerns are at the top of their list.

By contrast, social conservatives are animated into political engagement out of concern about the direction in which the country is moving. They are often both socially and theologically conservative. They believe the country is on the wrong track and are disturbed by what they regard as the unraveling of the social fabric and the breakdown of the social order. The prevalence of abortions, the decline of marriage, the secularization of the culture—all are indications to social conservatives of a society on a downhill trajectory. They engage in politics in an attempt to bring about a "course correction" for the country. Lacking the financial means to make significant monetary contributions to political campaigns, they invest sweat and shoe leather. They are the sign-planting, precinct-walking, phone-banking "worker bees" of the party. They are best known as the Republican "base", but are derisively referred to as "blue collars" by many of the Republican elites who tolerate their social agenda with sniffing disdain.

Despite obvious differences between the two camps, Ronald Reagan forged a coalition of economic and social conservatives by reaching out to both. Under his leadership, the Republican Party crafted an agenda that appealed to both groups. Lower taxes, less government, and freer markets coupled with a commitment to the sanctity of life and the primacy of the family produced a winning combination in the political arena. A strong defense and a strong commitment to traditional values helped provide the glue that kept the coalition together. Mr. Reagan's dignity and essential decency appealed to all. He made the CEO and the factory worker feel equally comfortable in his presence.

But that was then and this is now. Ronald Reagan has passed from the scene and while many claim to be heirs of the Reagan legacy, neither the Republican Party nor the current crop of Republican leaders have demonstrated that they have the DNA that authenticates their claims.

Evidence of the unraveling of the coalition that Reagan built became manifest in the Congressional elections of 2006. Republicans, firmly in control of the White House and both houses of Congress, had spent money like drunken sailors. Under Mr. Bush, government began to occupy an ever expanding role. "No child left behind" provided a bigger platform than ever for the federal Department of Education. The prescription drug bill leveraged government spending so much that Democrats were envious that it was a Republican sponsored program. Big drug companies were huge beneficiaries of the boondoggle. The Patriot Act provided an unprecedented level of government intrusion into the lives of Americans. Mr. Bush sought to dismantle the civil justice system by reducing accountability for negligent and reckless conduct by business interests. Decrying affirmative action for racial groups as a legitimate policy goal on one hand, he, nevertheless, embraced affirmative action for corporate wrongdoers with the other. Meanwhile, Republican leaders became so entwined with business interests that their lifestyles (funded by lobbyists with the largesse of blue bloods) began to rival that of European royalty. And the party of family values and moral principle became stained by sexual scandal. As a result, members of the coalition deserted the Republican Party in droves in 2006.

In the aftermath of the election, misconduct in the Gonzalez Justice Department has given rise to the Republicans' own "Monica" whose behavior (while radically different in kind from that of Miss Lewinsky), was nevertheless so troubling that her lawyers had her invoke the Fifth Amendment until they struck a bargain granting her immunity from prosecution. Paul Wolfowitz has been defrocked as President of the World Bank because he gave preferential treatment to his girlfriend and Scooter Libby has been sentenced to prison for lying about his role in the outing of CIA Agent Valerie Plame.

Enter Immigration. After years of failing to secure our borders and casting a blind eye to the practices of businesses' hiring of illegal immigrants, the problem of illegal immigration has become a problem of gargantuan proportions—so much so that there are no solutions that are not painful. While there are obvious national security issues inherent in the problem, it is the social and economic dimensions that threaten to end the Reagan coalition. The Republican base sees the solutions being offered by Mr. Bush and the Republicans as the final "sell out" of the party to big money interests. Blue collar workers have felt the pinch caused by illegal immigration perhaps more than anyone else. Cheap labor provided by illegals has artificially suppressed wages and deprived American workers of jobs in the marketplace. Meanwhile, businesses that hire illegals have flourished as a result of low labor costs. Lax law enforcement against businesses which violate the immigration laws have convinced domestic workers that the government is on the side of business. Already bending under the strain of low wages, these workers resent the additional taxes they have to pay because of the additional demand illegal immigrants are placing on the infrastructure of their communities—schools, day care centers and hospitals.

The Republican base also worries about the fact that illegals do not assimilate into society. Social conservatives see language as a unifying element in society and they worry that the failure of immigrants to learn the national language will lead to the Balkanization of the country. Additionally, the base resents what they regard as "amnesty" for wrongdoers. They don't like the idea of wrongdoers getting preferential treatment. They think that if people break the law, they should have to pay the price. Having heard their law and order candidates utter the mantra, "If you do the crime, you have to do the time" over and over again, they have come to believe it.

Republican blue bloods, on the other hand, have been largely bemused at the reaction of the base to the immigration debacle. They don't understand what the fuss is all about. Putting profits over people is a concept they are comfortable with. They have been doing it in their businesses for years. They aren't impacted in the same way as the base by the tax burden associated with immigration. After all, they have tax advisors and accountants who get paid to find loopholes. Jobs? They don't need them, they provide them. And if they can get a lower wage worker to fill them, that just means more money going to the bottom line. Preferential treatment? They are accustomed to getting it for themselves and their designees. Social implications? They don't worry about them. In the circles in which they move, they aren't exposed to an underclass. Common language? Among the elites, cash is the universal language, and if a foreign language is spoken, it is usually French, not Spanish.

Though these characterizations of the two wings of the Republican Party may seem extreme, they accurately depict the perceptions that each camp has of the other and the impact that each perceives illegal immigration has on themselves and the other. They also reflect the perception that the base currently has of the Party leadership and its response to their perceived problems. While some may want to argue about the legitimacy of their perceptions, Republican leaders would do well to remember that in politics, perception is reality. If the Republican leadership is going to solve the immigration problem without committing political suicide, they better take into account perception and reality. Otherwise, they may soon be left with no one to lead.