A Selfless Choice: In Celebration of Adoption 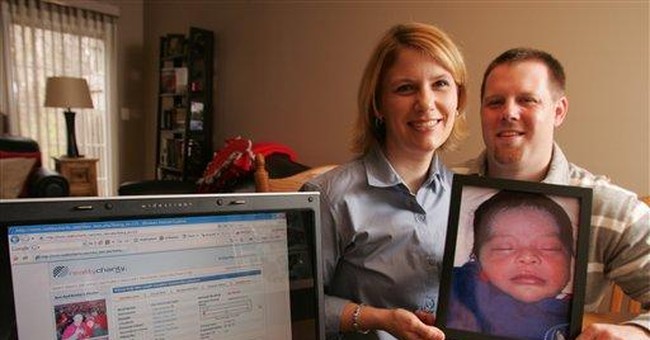 In the aftermath of the Supreme Court decision upholding the ban on partial birth abortion, proponents of abortion have reacted as if the sky were falling. Abortion proponents have grimly announced that a "womans right to choose" is in peril. Of course, they speak about the "right to choose" only in the abstract; they are careful not to identify the choice they have in view.

The morality of any "choice" under consideration, however, cannot be divorced from the thing that is being chosen. Choices are not mere abstractions. They are concrete, and they have consequences. Let's not kid ourselves about what is at stake in the "choice" debate. When abortion advocates talk about the "right to choose", they are not talking about the right to choose between chocolate and vanilla. They are talking about the right to choose to kill an innocent unborn child. The fact that a mother would contemplate killing her child, and that there are those who zealously advocate such a "choice", is evidence that something has gone very, very wrong in our society. As the Feminists for Life slogan puts it, "women deserve better than abortion." Indeed they do, and so do their children.

Adoption is an option that is not discussed nearly enough in the public debate about "choice". Rarely is the case for adoption made with the same vigor as the case for abortion. Part of the zeal for abortion is fueled by money. We should never forget that abortion is a multi-million dollar industry. With that kind of money at stake, it is easy to see why abortion proponents get so pumped up.

Adoption is truly a win/win/win situation. With adoption, the child "wins" because he or she is not only given the chance to live, but to live in a home with loving parents who can provide for his or her needs. Adoption is also a win for those couples who choose to adopt because they have the benefit of a precious new life to nurture. Finally, adoption is a win for the birth mother because she benefits from knowing that she has made the mature and beautiful choice of giving life to a child, providing for that child by finding a safe and happy home, and selflessly sharing that new life with others. When adoptions are done right they are occasions for joy all around.

Studies have shown that children who were born out-of-wedlock but are raised by adoptive parents do better in a number of categories than those who are raised by single mothers. They attain higher levels of education, have higher self-esteem, and enjoy better health. Similarly, adoption is also good for birth mothers. Such women are more likely to be employed a year after the adoption, more likely to complete their educations, and they are more likely to express overall satisfaction with life than their single-mother counterparts.

Despite all its advantages, adoption has fallen on hard times. According to research, there has been a precipitous drop in adoption since the year 1973 when abortion was legalized across America. Before 1973, 8.7 percent of children born out-of-wedlock were placed for adoption. Recent statistics put the number at around one-percent. This huge drop in adoption has many causes. First, there is less social stigma than there used to be attached to the idea of raising a child as a single parent. Second, there is more social pressure in favor of abortion today than there was in the past. Third, there is a lack of information about adoption provided to women who find themselves in a crisis pregnancy. Forth, adoption can be legally confusing and expensive. There are any number of other reasons that can be added to this list.

One matter that should be of significant concern for the pro-life movement is that young women facing crisis pregnancies often have false ideas about adoption. A study commissioned by Family Research Council several years ago, entitled The Missing Piece: Adoption Counseling in Pregnancy Resource Centers, did a magnificent job of shedding light on the painful assumptions that many women have when it comes to adoption. Women in crisis pregnancies tend to think of adoption as an abandonment of their child. They are often convinced that no other family can love their child as much as they do. They have heard horror stories about children mistreated by adoptive parents, and they assume that to place a child for adoption is to simply give the child away without any control over where he or she is placed. Many women do not think they are strong enough to "give a way" their children, that it is too great of a sacrifice, and that abortion is actually easier than adoption. The Missing Piece also found, however, that more emotionally mature women were usually in a better position to seriously consider the option of adoption. They were able to see that by choosing adoption they were putting their child's needs over their own.

Women facing crisis pregnancies need to know that, today, placing their child for adoption is not simply handing the baby over without any knowledge of how he or she will be raised. The modern adoption process frequently gives pregnant women an opportunity to be a big part of the process. These days, mothers are often afforded the opportunity to help choose the type of family in which their child will be placed. And many women who choose adoption are often allowed to maintain an element of continuing involvement that helps them know that they are not in any way abandoning their baby.

Sadly, we do not spend enough time celebrating women who make such a mature and strong choice in favor of life. Needless to say, thousands of lives across America attest to the success of adoption. It is one thing to demand a right to choose; it is another thing to choose well. Here's to the mothers who have chosen life and shared that life with others!