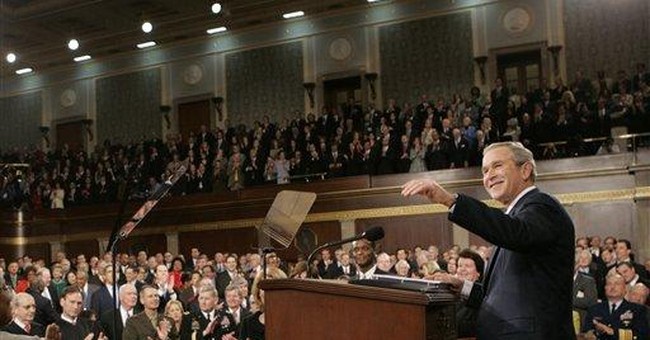 It is rare to see that many born-again believers congregated in one place on a weekday. It is especially surprising when the born-agains are all senators and representatives. Yet during last week's State of the Union address, the House chamber was packed with true believers, especially on the Republican side of the aisle.

While the State of the Union was, for the most part, a fine speech, a few of the lines really struck me. Here was a Republican president whose party recently lost control of the House and Senate. When addressing the budget, the President said, "What we need to do is impose spending discipline in Washington, D.C....Together, we can restrain the spending appetite of the federal government, and we can balance the federal budget." The remaining Republican congressmen cheered enthusiastically.

President Bush then said, "Next, there is the matter of earmarks. These special interest items are often slipped into bills at the last hour—when not even C-SPAN is watching. In 2005 alone, the number of earmarks grew to over 13,000 and totaled nearly $18 billion." Again there was enthusiastic applause.

I hate to say it, but it looks like we have in the Republican ranks many "born again budget-cutters" and "born again earmark reformers." Just last year the Republicans had control of the House, Senate and the White House. They could have done whatever they wanted on these issues, yet back then there was little fiscal restraint, and the earmarks were out of control. There's nothing like a ballot box conversion.

At the Center for a Just Society we have been calling for fiscal responsibility for quite some time, but before the election it seemed like the majority party had other priorities. Now that the majority has changed, Republicans are back on message. Of course, because the message is a good one, it is great to hear it articulated once again. However, voters will be looking for more than words this time around. If the Republican Party is looking for reconciliation with voters, it will have to prove its sincerity.

Republicans must stake out clear principles by which they plan to live, and they must steadfastly keep those principles. That means no corruption. That means no earmarks that do not benefit the common good. That means fiscal responsibility. Even though it may seem at times politically risky, these principles must be paramount. If Republicans start living like this—not to shame the Democrats, but simply because it is the right thing to do—voters will notice, and the majority will shift again. Voters respond to integrity when they see it (and they don't see it often).

The tragedy is that, when it comes to incumbents, both parties tend to look a lot alike. Again and again legislators from both parties take advantage of unethical perks and waste taxpayer money with frivolous earmarks. Because both parties are knee-deep in the mud, and seemingly enjoying it, neither party has been willing to truly change. While their rhetoric is sometimes noteworthy, there are rarely sufficient results to back it up.

Part of the problem is that many of the advocacy groups in Washington see what's happening but never say anything, for fear of hurting their preferred party's reputation. Republican groups give Republicans a pass, and Democratic groups give Democrats a pass. This is especially sad when the groups who are looking the other way are Christian groups, but unfortunately it happens all the time.

As we enter this new Congressional era, we should all resolve to hold each other accountable. It is clear that fiscally irresponsible spending, earmarks that do not benefit the common good, and political corruption, are not in America's interest. Therefore, whether you are a liberal or a conservative, a Christian or an atheist, a Republican or a Democrat, let's all speak with one voice and call our legislators to account.

As for the recently "born-again" Republicans, it is truly unfortunate that they did not live by the standard that they now affirm when they had the majority. Nevertheless, America is a land of second chances, and the born-again budget cutters and born-again earmark reformers are saying the right things. Now we can only hope that this is a lasting conversion.