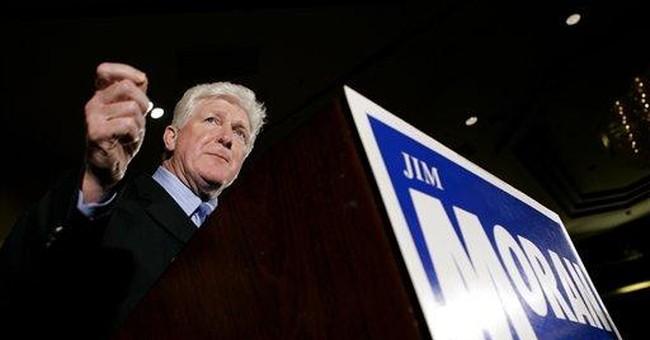 In Congressman Jim Moran’s (D) hometown of Alexandria, Virginia, a few years ago, some New Year’s Eve reveler ran his car into a pedestal in the middle of Washington Street. He knocked down a statue that had stood there for decades. The very liberal, very politically correct folks in Alexandria jumped at the chance to get rid of the soldier on the pedestal.

That soldier is a Confederate Johnny Reb. They were about to ship Johnny off to the old soldiers home when Richmond intervened. It seems the statue was put up with state funds and couldn’t be moved without permission of Virginia’s state legislature. Well, so much for secession. Johnny’s statue is back on his middle-of-the-road pedestal.

Congressman Moran is certainly no middle-of-the-roader. He’s a far-left liberal. And recently he took advantage of all the commentary about President Obama’s State of the Union Address to talk to Arab listeners throughout the Mideast. Mr. Moran gave an interview to the Arabic language radio network, al Hurra.

Jim Moran has an interesting take on the Midterm elections. He explained to millions overseas the reason for the Republicans’ victories:

It happened for the same reason the Civil War happened in the United States. It happened because the Southern states, the slaveholding states, didn’t want to see a president who was opposed to slavery. In this case, I believe, a lot of people in the United States don’t want to be governed by an African-American, particularly one who is liberal, who wants to spend money and who wants to reach out and include everyone in our society.

Where do you start with such a dog’s breakfast of illogic and contradiction? Surely, President Obama doesn’t want to include everybody in our society. If he did, he would not give billions to Planned Parenthood. That outfit was founded by an overt racist, Margaret Sanger. It destroys the lives of hundreds of thousands of unborn children. And the ratio of black to white abortions is 3:1.

But let’s unpack that Moran statement further. Americans rejoiced that a black man had been elected as their president. The country gave Barack Obama high marks and high approval ratings at the outset. Only when the president’s big-spending liberalism became undeniable did Mr. Obama begin to slide in the polls.

The Civil War? Yes, it did start when a number of slaveholding states refused to accept the election of a president committed to preventing the extension of slavery into the territories. Lincoln had said he would not compromise on that key point of the Republican Party platform. Hold on that, he told wavering members of Congress, “as with a chain of steel.”

It was the Republicans, not Jim Moran’s Democratic Party, that pushed through Emancipation of the slaves as well as the Thirteenth, Fourteenth, and Fifteenth Amendments to the Constitution. Civil rights bills to protect newly freed black Americans were passed by Republicans and opposed by Democrats in Congress. That’s the undeniable truth that Jim Moran seems to have forgotten.

Another bizarre aspect of Jim Moran’s strange interview is his audience: Arabs. Doesn’t he not know that Arabs were the ones who first began the slave trade in Africa?

It’s shameful that European states that claimed to be Christian—first the Portuguese and Spaniards, then the Dutch and the English—joined in the slave trade. But it’s a fact of history that the Christian states of Europe were the last in and the first out of what Jefferson called that “execrable commerce [that violated] the human rights of unoffending Africans.”

Muslim states like Saudi Arabia practiced slavery officially until 1962—within the lifetimes of many of us. And no non-Muslim is allowed inside Mecca and Medina today to see if the Muslim monarchs there have followed through on their paper commitment to end African slavery. Jihadists in East Africa today threaten the lives and liberties of black Christians every day! They don’t call it slavery, but what else is it when children are swept into the jihadists’ net?

Jim Moran is wrong about the sources of opposition to President Obama’s policies. The vast majority of fair-minded Americans agree with the statement “a black man can serve as president of all the people.” Poll after poll confirms this. The 2008 elections underscored this truth. What we oppose are specific policies that we believe are harmful to the country. It would be a lot more civil if Congressman Moran didn’t accuse Republicans and conservatives of trying to re-fight the Civil War!