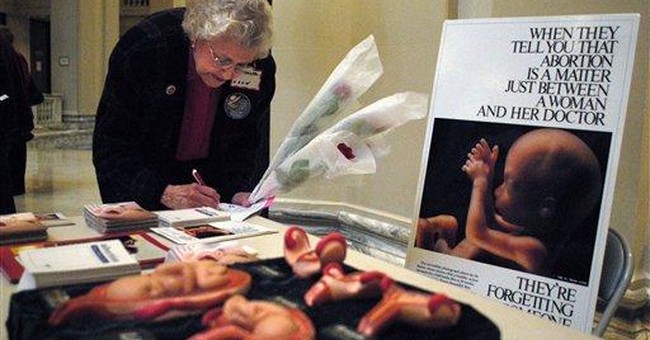 Reggie Littlejohn is a petite woman who heads Women’s Rights Without Frontiers. Attorney Littlejohn gave up a profitable practice to work for human rights.

Dr. Littlejohn showed how China’s brutal policy actually works. Women in China pregnant with their second or third “unauthorized” child, are rounded up and harassed until they submit to abortion--even in the eighth or ninth month. Estimates range as high as 50 million a year. China’s communist rulers claim it’s all voluntary. Littlejohn knows better. She provided congressional members of the Tom Lantos Human Rights Commission with incontrovertible evidence that forced abortion is official government policy and that it is widespread.

Dr. Littlejohn is calling upon Planned Parenthood and NARAL to speak up for the women of China who are daily denied their rights. She also hopes President Obama will raise the issue of human rights when he visits Asia this week.

What Reggie Littlejohn will learn is what Stephen Mosher learned more than 25 years ago. Steve Mosher was a young researcher from Stanford University. He was studying village life in rural China.

Then, Steve was “pro-choice.” But he discovered--in fact he was the first Westerner to discover--the way pregnant Chinese women were rounded up, thrown roughly into open trucks, hauled off to abortion centers by Communist Party cadres, and yelled at and stressed until they agreed to have abortions.

Steve was shocked by this denial of choice to these women. So he went public. He wrote about this story. He was promptly thrown out of China. And Beijing threatened Stanford University: If you want to send any more graduate students to China, you had better expel Steve Mosher. Stanford, you’ll remember, was the home of Jesse Jackson-led demonstrations in which student protestors chanted: “Hey hey, Ho ho, Western Civ has got to go.” Western Civilization was expelled from Stanford and so was Stephen Mosher. He was found to have violated rules passed by the Stanford faculty senate after he departed for China.

Steve Mosher thought Planned Parenthood and NARAL would rise to his defense. They didn’t.

And I seriously doubt they will be heard from now. We’ve heard precious little from them about China’s obvious, aggravated, denial of choice to Chinese women. Mosher did get a nice editorial in the New York Times tsk-tsking forced abortions in China. The Times, we should be reminded, is not unlike Winston Churchill’s description of Prime Minister Stanley Baldwin: “He occasionally stumbles over the truth, but he picks himself up and proceeds as if nothing had happened.

So it will be with President Obama. Reggie Littlejohn hopes the President will raise the issue with the Chinese. He won’t. We read in Kathleen Parker’s column about Chinese doctors sending emails back and forth describing the terrible problem of infants born alive after induced labor abortions. Senior party members advise puncturing their skulls as they are in the birth canal to avoid such dreaded complications.

Anyone who expects Barack Obama to raise this issue with Chinese officials is whistling in the dark. Barack Obama as Illinois state senator led the opposition to the Infant Born Alive Protection Act. He later said he would have voted for the bill if it had been like the one that passed at the federal level. Except that it was.

Of course, the world’s Number One enabler of China’s forced abortion policy is President Obama. He hesitated not at all last January before revoking the Mexico City policy initiated by President Reagan. After January 23rd, we are all forced to back abortion. Our tax dollars are backing the UN Population Fund (UNFPA) and International Planned Parenthood. Between financial support for China’s brutality and a bailout of the world’s largest abortion provider, Obama has claimed the crown as the world’s premier abortion backer. Maybe that’s why he won the Peace Prize.