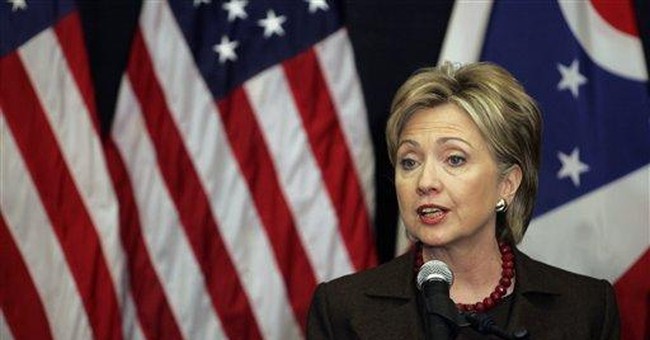 Hillary Clinton might win Ohio on Tuesday, and Texas may essentially be a tie. But even if she loses both, she should continue her campaign. If she does, she may well beat Barack Obama for the nomination.

I am the last person who would give advice to Mrs. Clinton, and would not vote for either her or Mr. Obama. But someone needs to point out the obvious. I was inspired by the encouragement Forrest Gump received from his childhood friend, Jenny, who cheered him on with, “Run, Forrest! Run!”

The obvious fact is that Barack Obama is manifestly ill equipped to be commander-in-chief. It is not just that he lacks the knowledge and experience to lead our military or leverage American prestige on the world stage. He also lacks the wary eye towards possible danger—the vigilant stand on the ramparts—that we need in every president.

Americans saw this as recently as last week, when President Bush had to publicly admonish Mr. Obama for the senator saying that as president he would meet with Raul Castro without preconditions. The president had to explain to the inexperienced senator how such meetings would strengthen Castro, embolden his oppressive regime, and demoralize people in Cuba and around the world as to whether America stands ready to help them win their freedom.

That situation was compounded this week, when Hugo Chavez ordered Venezuelan troops to the border with Colombia and is conferring with the Ecuadorian government about using military force against Colombia for that country’s recent attack on terrorists hiding in Ecuador.

Mrs. Clinton sees Mr. Obama’s deficiency, which is why she aired her new ad, asking voters who they would want answering the phone in the White House at 3:00 a.m if there is an emergency.

Mr. Obama responded that such ads are fear mongering. In doing so, he shows again that he truly does not understand that the world is a dangerous place. An American president must keenly understand and be on guard against the many threats facing our nation. Barack Obama is not on guard, and is instead running on the idea that vigilance is a vice, not a virtue.

If Mrs. Clinton continues running, then under the Democrats’ proportional-allocation primary rules she will continue to get almost as many delegates as Mr. Obama, right up to the convention.

By convention time, both candidates should have over 1,400 delegates, not counting super-delegates. Since 2,025 votes are needed for the nomination, neither could secure the nomination until the Democrats hold their August convention.

It would be stunning for Mr. Obama to go all the way to August without a critical mass of voters waking up to the dangerous combination of his extraordinary inexperience, naïve foreign-policy beliefs and lack of vigilance against those who mean America harm. It takes more than a good speech to protect a county.

Between Iran, North Korea, Afghanistan, the long-term threat of China, concerns over Russia, and now brewing danger in South America, there is unfortunately a real chance that dangers abroad will become a front-burner issue before Election Day.

Once voters fully digest this, Mr. Obama’s poll numbers against John McCain will dive, and Democrats will look elsewhere for a candidate with better prospects. It is inconceivable that in dangerous times Americans would elect a president who clearly is not ready to keep America safe.

Then again, it is possible. Maybe this fictional portrayal of Mr. Obama as a modern-day President Kennedy -- strong, wise and moderate -- ready to lead America forward together, could go all the way to the election. It seems impossible that such a profoundly unsubstantiated image could last that long, but there’s a first for everything.

But just last week, the bright lights have been turned on Mr. Obama. Tim Russert asked him tough questions during last week’s debate, prominent Democrats are beginning to speak out over the media bias for Mr. Obama, and even David Ignatius of the Washington Post is acknowledging that Mr. Obama’s record is as a stridently-liberal partisan, not a bipartisan consensus-maker who gets things done.

This may be the beginning of real scrutiny of Senator Obama. If so, then he will look much different to voters by this summer.

So Mrs. Clinton has nothing to lose by hoping that this trend continues. If it does, the bloom will be off the rose as people start thinking of ads like her 3:00 a.m. ad. If so, she will be the Democratic nominee in August.

Though she had better hope they do not think too much about whom they should want answering the phone in the White House at 3:00 a.m. Because if they do, they might vote for John McCain.

'No One F***s With a Biden': POTUS' Trip to Florida Goes As Expected
Townhall
Tweeter risks wrath of some of America's most privileged lib journos in order to expose their efforts to hide their backgrounds from the public; UPDATED
Twitchy
Watch: Joe Biden Arrives in Florida but One Moment With Ron DeSantis Stole the Show
Redstate
5 Years After Las Vegas Concert Shooting, an FBI Whistleblower Reveals Probable Motive
PJ Media