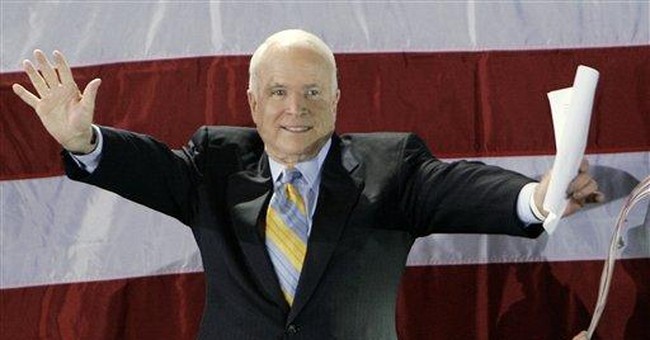 Now the race is down to John McCain and Mitt Romney, and Mike Huckabee. The conservative coalition is looking for one of them to take up the mantle of Ronald Reagan in truth, not just in name. If one of them does, he can win in November. If not, the next president of America will be a Democrat.

The only way a Republican can take the White House this year is if the GOP nominee both energizes his party base and also has strong crossover appeal for millions of swing voters. Only a Republican candidate who both secures his base and embodies change can win.

Many speak of the three-legged stool of the Reagan coalition: economic, social, and national security conservatives. But sometimes that metaphor doesn’t quite cut it.

There are more than three types of conservatives. Though they may all look alike to others, they are passionate about different priorities.

In reality, there are several key groups within conservatism. Among Senator McCain and Governors Romney and Huckabee, whoever can convince each element of this coalition that he is acceptable will unite the Republican Party.

Among social conservatives, the number one issue is definitely judges. Judicial nominations are the core motivator behind the pro-life movement, Christian conservatives, and — after the Supreme Court’s Second Amendment case — perhaps gun voters as well. Any nominee who does not take a clear, firm stand on nominating the right kind of judges will not win in November, as anywhere between four and 10 million conservative voters would stay home. As hard as this is for other Republicans to understand, this is an absolute deal breaker with millions of conservatives.

Christian conservative voters generally form the pro-life and traditional marriage crowd, and are also passionate about religious freedom, home schooling, and raising their children with their beliefs.

Millions of pro-life voters will not vote for anyone they perceive as uncommitted on life. Though their priorities include abortion funding, abstinence education, and stem cells, judges trump everything for them. They are essentially single issue on the federal courts.

Second Amendment voters can save or doom any election. Since the NRA started endorsing a president in 1980, the two times it refused to endorse the Republican, 1992 and 1996, are the two times Republicans lost. Bill Clinton himself said the NRA cost Al Gore the White House. In addition to legislation and regulation, this year the Supreme Court may become a top issue for them, as well.

Economic conservatives mainly care about two things: taxes and spending. Republican leaders have been fantastic on the first, and terrible on the second. Government regulation, tort reform, and health care are also issues.

Then there are philosophical conservatives. These people are committed to limited government, understanding that the Constitution only empowers the federal government to do certain things, leaving issues like public safety, health, and morality to the states.

Finally, there are national security conservatives. While they may divide over FISA and the Patriot Act, all are united in expanding and supporting our military and being on offense against radical Islamic terrorism.

Some will say all of these conservatives will simply come around at the end of the day. Don’t bet on it. However, if Hillary Clinton is the nominee she will indeed energize and motivate the Republican base. There are literally millions of conservatives who will not vote unless they perceive a candidate who welcomes them in the Republican Party and takes up their cause.

Others will say that a moderate ticket can pick up more votes in the middle than it would lose on the right. Dead wrong. Up to 10 million votes would be lost. And, some of the votes Republicans would lose are not just votes, they are the contributors and the grassroots forces. Without them, the Republican nominee cannot beat what will be a fiercely motivated Democratic Party.

It’s key to emphasize that the Republican nominee need not be the first choice for all of these groups. He does not need to be a crusader for them. He must simply be a friend, rather than neutral or — worse yet — an adversary.

The would-be nominee must simply be someone for whom each group says, “He’s not everything I hoped for, but he’s good enough that I’ll fight for him.” He must show that his agenda will reflect their core concerns, and never abandon those commitments in the face of a Democratic Congress for legislation, or a Democratic Senate for judicial confirmations.

The Republican nominee must do these things. If so, he may well lead a united party to win in November. If not, he will lose, and everything from the Supreme Court to taxes to spending to Iraq to Social Security to border security to health care will be lost as well.