Can McCain Seal the Deal? 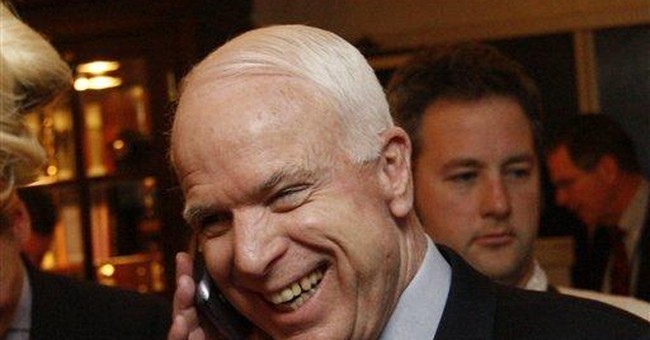 After winning New Hampshire, it’s clear John McCain is resurgent as a leading Republican candidate. Having crossover appeal to gain independent voters already, there are three things that, if McCain does, he could become the next president.

The Arizona senator is in an interesting position, as shown by his five-point margin in New Hampshire. He won a plurality of primary voters in the Granite State, showing that he has a firm foundation on which to build. Mitt Romney, however, won a plurality of conservative Republican base voters in the New Hampshire primary. So, while some potential growth could come from moderates and independents, much of the growth that is needed must come from core GOP voters.

The key to a McCain victory is to appeal to the GOP base without losing his centrist support. He must solidify and energize his party’s base while being the preferred choice of swing voters. It’s a tall order and it would take lots of work, but if he does it then he might take both the nomination and the general.

Mr. McCain’s advisors cannot make the mistake again of taking the base for granted, casting the senator as the inevitable candidate, telling conservative leaders to get onboard while ignoring the deeply-felt priorities of the party faithful. Some took the base for granted, and then when Iraq fatigue set in it was almost enough to finish him.

That’s because there are several factions of the Republican base that have had terrible relations with the senator. He may be able to win early primaries without them, but if he secures the nomination, he simply must become a candidate they can support to energize them, get them contributing and working, and turning out in big numbers. In other words, he might pull off primaries in a divided field without these things, but he needs them for the general election.

The three things for Mr. McCain needs to do in order to mobilize the base while holding the middle are:

First, he must be the agent of change. A big part of what Barack Obama has tapped into is that many millions of Americans want change. Whoever takes the Democrat nomination, that’s their campaign centerpiece. Mr. McCain needs to be the agent of change. And he can emphasize it from what he’s already pushed: Earmarks must end, he’ll veto any appropriations bill with them, and he’ll make their supporters famous. Earmarks have been a big disappointment to the GOP base, people are fed up, and Mr. McCain can end that scourge. He can expand that change theme to entitlements, energy independence, and health care.

Second, he must reach out to conservatives. He must hold together President Reagan’s coalition if he wants to lead the Party of Reagan. Mr. McCain must engage conservative groups, leaders, and members in an open and friendly manner. Rudy Giuliani has done this already, winning over people like Pat Robertson. Mr. McCain must dispel notions that he is hostile to conservatives and opposed to their causes. He has to sit down with them to discuss specifics, and in so doing, show that he is willing to engage them.

And third, the best way to do this is to make judges and justices a campaign issue. The composition of the Supreme Court is the single most important issue to countless conservatives. If Mr. McCain does what Mr. Giuliani has done — publicly assembling advisors on judicial matters and taking a clear public stand on using the right criteria for judicial nominees — he can become substantially more acceptable to millions.

The critical element of these three things is that they are major factors for the GOP base, but do not move moderate voters either way. These energize the right without angering the center. And Mr. McCain is one of the few public figures who could pull this off because voters know they can trust him to keep his word.

It’s absolutely essential that Mr. McCain understands that these voters will not simply “get on the bus.” Hostilities run too deep for that. While millions of conservatives can be counted on to support the GOP nominee, literally millions more will sit out unless that nominee makes enough of a connection for those voters to say, “He’s one of us.”

Or rather, those voters just need to say, “He’s not one of them.” Part of Mr. McCain’s appeal is as a straight talker. Instead, he simply needs to be an acceptable alternative for committed conservatives. He just needs to leave them thinking — while they have their differences — he would make a good president by their standards.

Beyond that, it would be the icing on the cake to get conservative leaders like Governor Sanford of South Carolina to endorse Mr. McCain in the next couple of primaries. It’s not necessary for a win, but if Mr. McCain could start getting top conservative officials in these states to line up with him, it would be a great advantage.

The next couple of weeks will be interesting. If Mr. McCain makes the right moves, he could make the ultimate comeback.