A Triple-Win Would Be Romney’s Chance 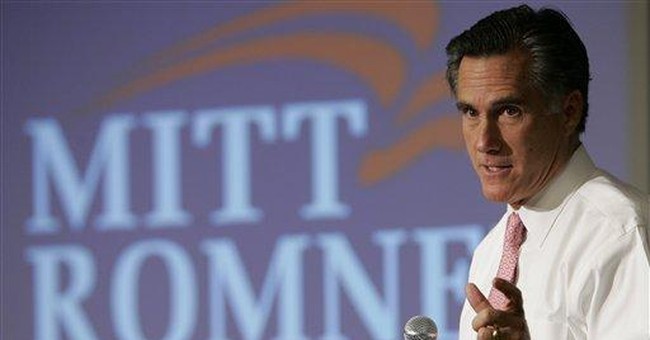 Mitt Romney must win Iowa, New Hampshire, and Nevada to have a chance at the nomination.

All presidential campaigns are near impossible. But even when almost impossible is the norm, Mr. Romney faces a daunting challenge.

With numbers showing that a South Carolina win might be impossible, Mr. Romney must take Iowa, New Hampshire, and Nevada to have a shot at winning Florida, and then go on to success on Super Tuesday.

Iowa campaigning is unique. To be counted in the caucuses you have to participate all the way through a four or five hour meeting, and so only the truly committed participate. Moreover, these voters are savvy and informed.

New Hampshire also is in a class of its own. These voters take their role seriously, and you need to make quite an effort talking with them and making your case to earn their vote.

And now Nevada has taken the unprecedented step of moving its caucuses up to January 19, just days after the first two contests and before South Carolina. More than 90% of the population in Nevada lives in the Las Vegas area, so in essence it’s a Las Vegas caucus. And since it’s a caucus, we’re again looking at only true believers voting. Since the state borders a Mormon-majority Utah, Mr. Romney has a unique advantage in Nevada.

Against that backdrop, Mr. Romney’s strategy comes from his unusual set of strengths and weaknesses.

He is well-educated, a successful businessman, and was an effective governor. He’s a pro-business, economic conservative. He is a good speaker with a charming and friendly manner. He has tremendous wealth, $9 million of which he’s already contributed to his campaign. He even looks presidential, with his good looks and a supportive wife and family. That’s all positive. But he also has three tough obstacles to overcome.

First is his inconsistency. He has reversed himself on the three biggest social issues for conservatives. Just four years ago he was pro-choice, pro-homosexual agenda, and anti-gun. Today he’s pro-life, pro-family, and pro-gun.

Second is his relative inexperience. Having only one term in office and no experience in the military or with foreign policy are bigger deals now since we are in a long-term global war.

And third, fair or not, is his Mormonism. Many evangelicals, a key base element, take issue with his religion, and a recent poll shows that many moderate women, a key swing bloc, also have a problem with it.

So Mr. Romney has no choice. An aggressive strategy is necessary. While he’s up in the Iowa and New Hampshire polls, Nevada polls are mixed and he’s fourth in national polls. He’s not nearly as well known as Fred Thompson, Rudy Giuliani, or John McCain.

Something has to explain the difference between Mr. Romney’s high numbers in Iowa and New Hampshire versus his low national numbers.

The Romney campaign would say that as voters get to know him, he’s winning them over with his vision and values. That might be true.

But critics argue that Mr. Romney’s strong polls in those states are the result of paid advertising there. Spending vast sums of money for press in the early states is bound to bring in results while most other candidates have not yet done the same.

They also point out that many core GOP voters have serious problems with Mr. Giuliani’s liberal views and personal life, and a there are a host of grievances against Mr. McCain. These people speculate that Mr. Romney is ahead with those people by default, but that they’re open to an alternative.

Mr. Romney has packaged himself as the only conservative who can win. Mr. Thompson entering the race imperils that strategy.

Mr. Romney’s greatest concern must be South Carolina. Despite spending a fortune in the most conservative early primary state, he remains in fourth place in polls. That is why Mr. Romney must win in all three of the early states.

Northern Florida is similar to South Carolina. A South Carolina loss puts Mr. Romney at a disadvantage there. With three wins under his belt, he could launch an aggressive, and expensive, campaign trying to leverage that momentum across Florida. A win in Florida, if coupled with winning the first three states, could make South Carolina look like an anomaly and give him exactly the national poll surge he needs for Super Tuesday.

One good sign for Mr. Romney is that 23% of GOP primary voters are undecided about whom to support. With Messrs. Giuliani and McCain, both well-known and having been in the race for months, this gives Mr. Romney an opening to pick up support among voters who do not know him yet. This poll is also good for Mr. Thompson, since he’s not officially in the race yet.

Mr. Romney cannot be pleased with Mr. Thompson’s imminent entry into the race nor can he like Mr. McCain’s recent woes. Mr. Romney’s best shot is a three-way contest against Messrs. Giuliani and McCain, with those two splitting more moderate GOP voters.

No one has enough money to lay a paid media carpet across the entire country. A week’s advertising costs in some markets overshadows a month’s costs in Iowa. And there’s not time for in-person retail politics in every small town across America.

Mr. Romney will need to find a way to project his image to the people without face-to-face interaction and without paid advertisements. If he does, and wins the first three contests, he just might make it.

It seems almost impossible. But like I said, that’s the norm for presidential campaigns.