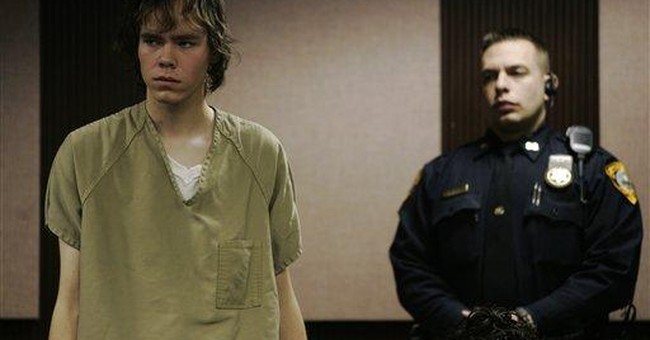 "[T]he legitimate powers of government reach actions only and not opinions ...."
-Thomas Jefferson

For those who commit physical crimes against others based on race, religion, or sexual orientation I have no sympathy. But the notion that government can punish thoughts and opinions, even offensive ones, is frightening.

A bill making it illegal for people of various faiths to freely hold and profess their respective religion's teaching on sexual morality is working its way through Congress. Regardless of your politics, every American who cares about free speech and religious liberty should tell their U.S. senators to oppose this legislation. This bill has already passed the House of Representatives on a largely party-line vote with a Democrat majority. It is now pending in the Senate Judiciary Committee, and is expected to be voted on by the entire Senate in a month.

This bill would criminalize beliefs. If signed into law, H.R. 1592 would create a new class of crimes.

Called the Local Law Enforcement Hate Crimes Prevention Act of 2007, this bill would pour federal resources into prosecutions based on suspicions about a person's thoughts and beliefs, not just his alleged criminal act(s).

While criminal law treats all violent acts equally, the proposed law would additionally punish the accused for any prejudice they might have toward the victim. Instead of ending discrimination, this bill would create a judicial caste system in American society by creating categories where some victims are given more consideration and attention than others. This is a direct affront to the equal protection provision of the U.S. Constitution.

As a former U.S. Ambassador to the UN Human Rights Commission, and a person who grew up fighting racism, I oppose the idea of thought crimes. In America, our Constitution guarantees everyone the freedom to think and believe whatever he or she wants, no matter how repulsive those beliefs are to others. And, our Declaration of Independence champions the dignity and worth of every individual.

Our system of laws requires evidence and varying levels of proof for different offenses. We lock people up for criminal acts. That penalty is already established in law. This bill would allow government to further punish them for their alleged beliefs.

As a country, do we want to be in the business of "proving" what someone thinks or denying them freedom of conscience? Do we want to rip the heart out of the First Amendment of our Constitution? Do we want to deconstruct our public square where progress has been advanced by a dialogue between faith and reason? Do we really want to embolden a 21st century secular fundamentalism by forcing religious expression from the public square?

The answer to these questions is a simple and emphatic no! What is driving the controversy associated with this bill ultimately comes down to one issue: Can the government punish a person for a "thought crime" whose religious faith includes the belief that homosexual behavior is immoral, and same sex marriage is morally objectionable?

While some modern liberal denominations and other faiths refuse to criticize homosexual sex and embrace same sex marriage, it is an historical fact that moral evaluations of these acts have been part of the Judeo-Christian belief system for four thousand years.

And, millions of Americans oppose these acts because they believe the historic teachings of their respective religions on this matter.

No rational person argues against the proposition that all American citizens should be afforded full rights and protections under the law and Constitution. The present debate surrounding this bill is derived from the fight to preserve the most fundamental institution necessary for the continuation of any human civilization - the family.

Isn't it classic community doublespeak when a society that has decriminalized homosexuality is now contemplating criminalizing opposition thoughts?

The question we face is if the federal government should have the power to lock people away for beliefs flowing from their religion. Think it can't happen?

In Sweden, a pastor was imprisoned for 30 days for simply expressing his faith's view of homosexuality in a sermon. In Canada, Christian leaders received a hefty fine for expressing the same view over the radio. And right here in America, in Philadelphia eleven people were arrested and prosecuted for sharing the Christian gospel at a homosexual rally.

No violence was committed in any of these situations.

They were simply punished for expressing their faith.

President Bush has said he will veto this bill if it passes the Senate. Regardless of what you think about homosexuality, you should support stopping this bill.

We punish people for their wrong acts, not for what some consider their wrong thoughts. America has a rich heritage of religious liberty and free speech. Let's keep it this way.