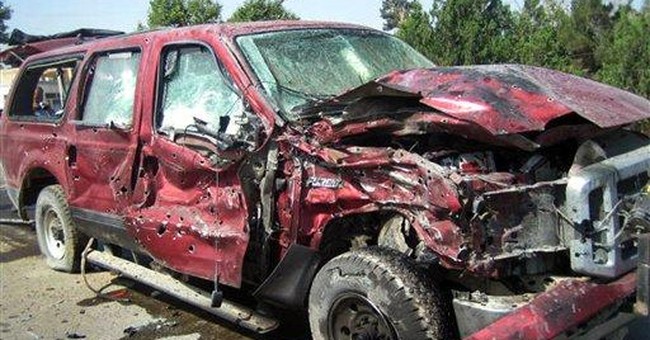 "There are two powers in this world, the sword and the spirit. Over time the spirit will always prevail." — Napoleon

The merciless monsters who constitute Al Qaeda and its terrorist movement are equal opportunity killers.

They will use anyone — man, woman, pregnant mother, child — in acts of suicide to kill anyone: Spanish commuters, Sudanese Christians, Indian train travelers, London Tube-riders and tourists, or Americans working at their desks on a clear September morning.

They will kill by any means: videotaped beheadings, homemade bombs packed with nails, explosive chlorine tanks, and, of course, jetliners loaded with fuel — and people. Their terrorism is an asymmetric form of warfare that seeks to attack the human spirit.

In their minds and through their methods, evil has assumed a hideous new shape. The human spirit reels at such enormities, because the boundaries the jihadists cross are the bare minimums of civilization. It’s difficult for us to conceive of such hatred. That may be one reason why we are so ready to believe such hatred has faded, or will soon fade, from the scene. But this battle will be long and, much of it, spiritual in nature.

For now, it appears Congress has given up on the plan for a legislatively imposed timetable for withdrawal from Iraq, but there is the sense that what the liberal majority really yearns for is a holiday from history. Facing the immensity and durability of the jihadist threat, a threat that has raged now for decades, the congressional majority pins its hopes on a change in us rather than the decisive defeat of those who attack us. The political games in Washington are weakening the will of the nation.

In psychological terms, the political Left is like the battered spouse picking through her own faults to find the reason why she is being terrorized. America is being attacked for the values we hold and the freedom to which we are so dedicated. We didn’t provoke the attack of 9/11, the 1979 Iran hostage crisis, the 1983 bombing of the Marine barracks in Lebanon, the 1998 bombing of our embassies in Kenya and Tanzania, or the bombing of the USS Cole in 2000. The problem is not American imperialist greed, but a transnational movement of extremist organizations, networks, and their state sponsors that is determined to steal our freedom and dominate us.

The answer to the Left’s enabling is realism: America did not cause radical Islam. Smiling more and meeting with dictators will not cure it. The jihadists are zealots filled with equal-opportunity hatred for both the best and the worst of Western civilization.

The best is the tradition of individual dignity and freedom that undergirds our free institutions and allows people with profound differences to live in peace. The worst is the bitter fruit of the misuse of the freedoms we possess, expressed in the rank materialism that transforms the pursuit of happiness into a culture that accepts anything that produces wealth.

To the jihadist, either target will do. Both our faith and our faults feed their fury. Our Judeo-Christian commitments, and the many ways we fall short of them, are valuable in attracting recruits. What they seek is not a reduced Western presence in their lands but extinguishing the flame of freedom throughout the world.

There is no doubt that the jihadists take texts from the Koran that permit the killing of infidels and apostates, and applies them with brutal exactitude. They claim their ultimate aim is the achievement of peace, but not the peace you and I understand as a reconciliation of opposing parties. The jihadists aim for a planet unified under sharia law and Islamic uniformity.

Defeating the radical jihadists will require renewed resolve and spiritual rearmament in the West, where we have seen the challenge brought to our cities and neighborhoods. It will require the wise use of military resources now in Iraq, as we seek to speed the transition to stable self-government. It will require us to do more to encourage moderate voices in the Muslim world to reject violent extremism.

Additionally, churches and synagogues in America need to raise their awareness of and resistance to the jihadists’ mission. A clear and present danger to our safety and freedom is a public square devoid of spiritually empowering religious expressions of the human conscience.

America has a long history of jealously guarding religious freedom by acknowledging God and the contribution of believers in the public square. While that tradition accommodates non-Western religions, the vast majority of whose adherents embrace our republican form of government.

A form of religion that approves the murder of non-believers and those who convert away from it, as radical Islam does, is not compatible with our way of life. It breeds a culture of slavery, ours is a culture of freedom. With patience and courage, the spirit of which Napoleon spoke, will prevail.

Dialogue, diplomacy, and interfaith understanding all have their role. On some issues, however, we must draw a line in the sand — lest we be forced someday to draw that line at our own doorstep.