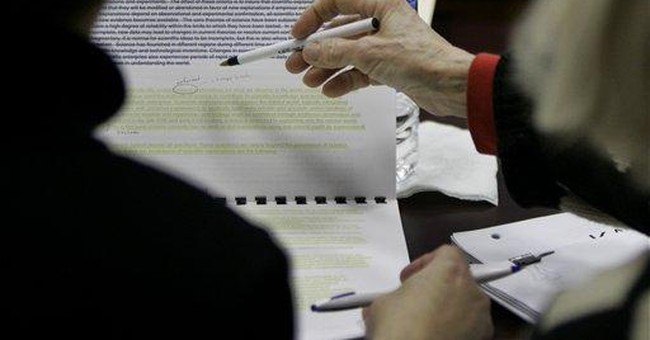 Crucial presidential debates are coming soon. They can be a subtle problem, especially when it comes to evolution. Often reporters ask questions that are designed to do irreparable harm to conservative candidates. That was exactly the intent of the evolution question in the first GOP candidate forum on MSNBC on May 3.

On that occasion, Senator McCain was asked if he believed in evolution. He said he did, explaining that he sees God in the majesty of the Grand Canyon.

But the trap was set. The other nine candidates were asked to raise their hand if they did not believe in evolution.

Three hands were raised. Seven candidates kept their hands down.

The problem is this: Evolution is not merely a yes or no question. Consider this scenario.

What if the request had been, “Raise your hand if you don’t believe in abortion.”?

“Well let me explain. Some people believe in abortion on demand, some believe that abortion should never be permitted. Most people don’t fall into either camp. What about someone who is generally pro-life, but believes abortion should be permitted in cases of rape or incest? What about people who believe abortions should be legal early in a pregnancy, yet oppose late-term and partial-birth abortion.

A yes or no question on abortion simplifies the issue. It doesn’t give us a chance to explain our position. When we raise or don’t raise our hand, viewers have no idea of the complexity of the issue. All this does is create confusion, resulting in the exact opposite of what public debates are supposed to achieve.”

Here is what I believe the best answer would have been to the evolution question: “I can’t answer until you expand upon your question. Are you asking about microevolution or macroevolution?”

This keeps conservatives out of the trap. This forces a discussion of the issue. The moderator can only proceed by saying, “Can you explain?”, in which case the candidate should continue:

“Well, if you mean microevolution, where an organism adapts to its environment with the flexibility inherent in its DNA, then yes I believe in that; we see it every day in nature. But if you mean macroevolution, where mutations stack on one another to create entirely new organ systems and transform one species into a totally different species, then I, along with many scientists, have serious issues with that theory.”

Polls show about half of Americans have problems with Darwinian macroevolution. Such a position may not be en vogue with the mainstream media, but it does bolster the weight of the pro-microevolution candidate’s argument.

There are scientists who echo the concerns of a vast number of Americans. Models like the doctrine of irreducible complexity explain that certain organs, such as the eye, require dozens of different components, each made of billions of cells, all working together to function as a whole. It argues such organs cannot evolve over time, they only benefit the creature at one hundred percent capacity. A 99% evolved eye is useless. This model suggests organs must be entirely present and perfectly fit together or they do not work. Modern theories of macroevolution have no explanation for how such organs came about.

Regardless of what you believe, that’s a fair point for a rational person to make that does not rely on any religious belief. It’s a scientific concern, not a religious objection.

Yes or no questions on evolution only serve to make conservatives appeal to one part of the electorate by alienating others. It’s “gotcha” politics, pure and simple. They serve no purpose other than helping liberals get elected.

I’d like to give the questioners the benefit of the doubt. Maybe they didn’t realize how unfair the question was. It’s possible they don’t understand this issue themselves.

Some on the Left can still be so blinded by their political ideology and opposition to conservative Christian beliefs that they ask such unproductive questions in order to promote a clearly secular agenda.

Televised forums of presidential candidates should be about more. The country deserves better.