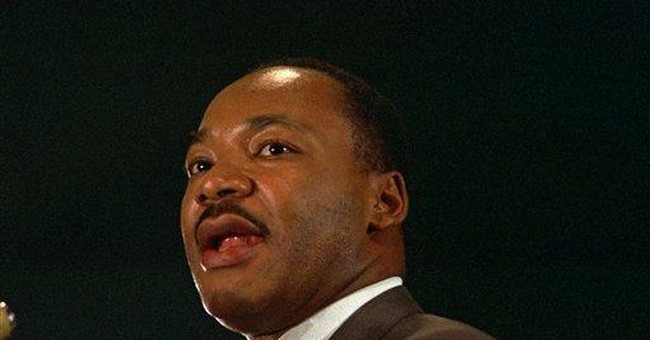 Since his death, America has come a long way.

Today, our nation is a testament to both Rev. King's accomplishments and those of whom he inspired. African-Americans hold positions of power and influence at the highest levels of government and industry. Progress has been made on the old civil rights battle fronts. But new fronts have opened.

While the battle is brewing in Texas and Florida, nowhere is it more crucial than in Ohio. Here, newly elected Governor Ted Strickland, in a nod to his political allies in the state teachers' unions, is waging an aggressive attack on school vouchers and charter schools.

Calling school vouchers "undemocratic" and charter schools a "dismal failure," Gov. Strickland, in his first major public policy address, slammed the door of educational opportunity on thousands of poor children and crushed the hopes of their parents.

By denying these children the equal access to a quality education that choice programs offer, he also denied that the bloated public education bureaucracy and its entrenched unions have failed our children. Gov. Strickland positions his opposition to choice as part of an overall effort to eliminate inefficiency and force accountability, but he misleads.

Currently, large numbers of Ohio's public schools, particularly those in the state's urban areas, fail to teach our children. Public school failure can be measured in many ways. For example, over 115,550 students in Ohio's eight largest cities are attending 251 schools not meeting even the state's minimal education standards. Far larger numbers of children are receiving educations that leave them completely unprepared for today's global economy.

In contrast, school choice programs are working and growing. First in the form of charter schools for 76,000 pupils in over 200 schools, then in an autism scholarship expanding choice to key middle class constituencies, and now to the EdChoice program making another 50,000 students eligible for 14,000 vouchers to escape failing public schools.

These fledgling choice programs are becoming increasingly popular because public schools are performing so poorly. In fact, Ohio's charter schools and vouchers are only available to students living in districts in academic emergency or academic watch.

As taxpayers who contribute to overall public education funding, parents should have the broadest educational options available.

Instead, too many are forced to raise their children in failing districts with few options. The public school monopoly dictates, through geographical boundaries, who will attend what school. Tax dollars are swallowed by unaccountable bureaucracies more concerned with administrative requirements than with children.

Ohio's charter schools and vouchers are changing the dynamic and offering a solution. The programs infuse the underperforming public education system with a healthy dose of free market competition. And through that competition, improve education across the board.

The Columbus Dispatch praised their contribution stating in a recent editorial, "The only thing that has prodded the conventional school system to do something about its mediocrity, inefficiency and inertia is the alarm generated when students and the money to educate them began to decamp for voucher and charter schools."

The newspaper also took issue with Gov. Strickland's lack of accountability argument writing, "Parents can pull their children out of these schools whenever they like for any reason. Until the advent of charters and vouchers, the majority of parents had no way of punishing a failing conventional public school so immediately and directly."

The Dayton Daily News also joined the debated adding, "Ohio's public schools are better today because of the competition charter schools and vouchers have created. The governor and public school advocates need to deal with that."

These two newspapers, usually all too willing to carry water for Ohio's new Democrat governor, sharply broke ranks with Gov. Strickland because they understand the negative impact his push will have on poor children. They care.

So too should school choice advocates across the nation. In Ohio, opponents of educational options and empowerment are emboldened by recent electoral victories. They control the governor's office, wield the veto pen and stand ready to eliminate charter schools and vouchers.

In the 1960's, Rev. King fought segregationists who put up barriers to basic human rights and denied African-Americans the civil rights each of our nation's citizens are guaranteed. Today, we fight entrenched bureaucracy, greedy teachers' unions and their politician allies. Their hearts may be different, but their desired result is the same. They seek to deny poor children a fundamental civil right - equal access to a quality education.