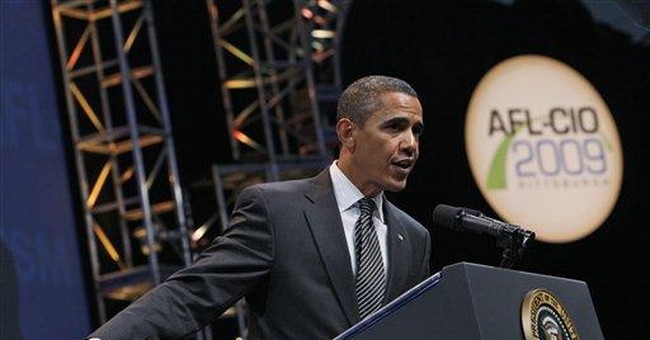 In a year when the anger of the American people toward Washington politicians and their backroom deal-making has hit a fever pitch, President Obama surprised many with an overtly political and gratuitous reward to union bosses by not only heeding their demands to recess appoint both of their nominees to the National Labor Relations Board (NLRB), but also leaving another out altogether.

Obama’s actions smack of “payback” to labor bosses who invested half a billion dollars getting him elected in the first place. Furthermore, the appointments of Craig Becker and Mark Pearce can certainly be read as a slight to the former institution Obama served in, the U.S. Senate.

Craig Becker is considered a labor radical by Republicans and Democrats alike, and members of both parties voted down his nomination. In appointing Becker during the Congressional recess, Obama has chosen in one act to bypass the Congress, ignore the will of the American people, put forward a job-killing agenda and, lastly, reward his friends in Big Labor.

Becker’s nomination has been controversial from the start. Groups representing small businesses and the hardworking employees that keep them running, such as the Workforce Fairness Institute (WFI), have warned Congress about “The Becker Doctrine” of forced unionization, which would result in increased unemployment and decreased freedoms.

All 41 Republican members of the Senate urged Obama not to appoint Becker during the Easter recess, saying in a letter that, “We oppose Mr. Becker’s recess appointment because of his extensive, highly controversial writings, and his entire legal and scholarly career, all of which indicate that he could not be viewed as impartial, unbiased or objective in deciding cases before this quasi-judicial agency. Instead, his writings clearly indicate that he would use his position on the NLRB to institute far-reaching changes in labor law far exceeding the Board’s authority and bypassing the role of Congress. His rejection of traditional notions of democracy in union elections and of an employer’s status as a party to labor representation proceedings has garnered bi-partisan opposition to his nomination.”

Given his past writings and employment by the American Federation of Labor and Congress of Industrial Organizations (AFL-CIO) and Service Employees International Union (SEIU), Becker could potentially implement pieces of the job-killing Employee ‘Forced’ Choice Act (EFCA) through “administrative action.”

In fact, union bosses expect nothing less. Recently an AFL-CIO member wrote, “If [sic] we aren’t able to pass the Employee Free Choice Act, we will work with President Obama and Vice President Biden and their appointees to the National Labor Relations Board to change the rules governing forming a union through administrative action...”

EFCA would force workers into unions by removing their right to vote via secret ballot during union-organizing elections, opening them up to intimidation and coercion by labor bosses and organizers. EFCA would also force workers and businesses into two-year binding contracts with set wages and benefits determined by a federal government bureaucrat. Worse yet, workers would have zero say in their own contracts. And, the pension programs they would be forced to join are currently, in many cases, financially bankrupt.

EFCA is the number one goal for labor bosses since it will drive up union membership, and more importantly, increase dues. After all, bankrupt union pension plans can only be replenished with more dues -paying members – Big Labor’s dirty little secret.

Becker’s appointment could usher in a whole host of new paybacks to union bosses, which they have been hoping for since supporting Obama’s campaign. But forced unionization rules that take away workers’ rights, or even the rights of small businesses to stay afloat, are not consistent with the concerns of the American people and directly contradict the priorities the administration committed to address, namely jobs.

President Obama’s actions this past weekend of not only appointing an enemy of small business and job creation, but following it by appointing the other nominee supported by Big Labor while ignoring Brian Hayes’ nomination, sends a message to the nation’s job creators that they do not have an ally in the White House, but rather an antagonist committed to following his political patrons down a road that results in lost jobs and a weakened America.