Behind the Scenes at the Hannity Freedom Concert 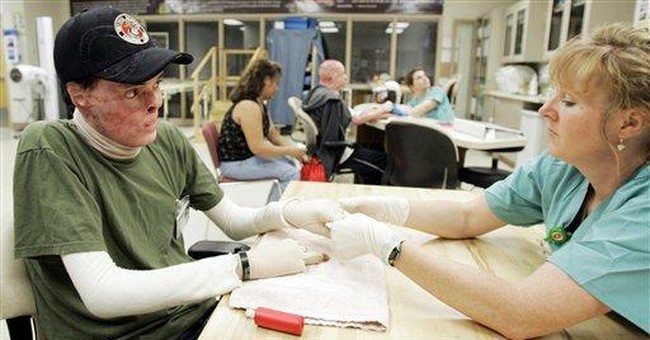 Townhall.com’s gold partner Freedom Alliance is sponsoring the 2007 Hannity Freedom Concerts all across America this summer.

Greg Stamps, a native Texan and a longtime member of the Townhall.com team, represented Townhall at the August 14 concert and sat down with Freedom Alliance president Tom Kilgannon at the Texas event. They discussed all aspects of the concert, but the description of the scholarship fund stood out most to me when Greg recalled the interview. After interviewing Tom, here is Greg's brief description of the fund:

He told me that Freedom Alliance will provide $500K+ this year for 115-120 scholarships for Gold Star children and children of permanently disabled or POW/MIA soldiers. He said they've given out $1.6+ million in scholarships since the inception of the fund. They now have a $10 million scholarship trust.

(You can also read more about the scholarship here and here.)

Tom also told Greg that most of the fallen soldiers' children are currently between 2 and 8 years old and that Freedom Alliance seeks to provide help where there is the greatest financial need: college tuition. For this reason, most of the funds will be available in 10 to 15 years when the kids head to universities. It’s also important to note that this is no free pass; the scholarship recipients are expected to maintain good grades in order to renew their scholarship each year.

Greg had the chance to meet Freedom Alliance scholarship recipient Megan Walley of Palestine, TX. She’s about to graduate from Texas A&M with a degree in Business and Marketing. Her dad is a disabled Vietnam veteran. Here’s a picture of her with some Freedom Alliance staff members:

Though there are probably more that came on their own, Freedom Alliance was happy to know that--in addition to Megan--there were about three dozen Gold Star families in attendance last night.

Kilgannon said the highlight of the concert tour for him is meeting hundreds of great people who have lost loved ones to battle, but who honor their memories through their myriad efforts to support the troops and rally around the military and military families.

So, where does Hannity come in? It is, after all, the Hannity Freedom Concert.

Greg told me that Tom Kilgannon praised Sean Hannity for the tireless effort and energy he gives to support the scholarship fund and that Tom also explained how exactly Hannity got involved with the Freedom Alliance project. In Greg's own words:

Hannity was first turned on to this effort when Ollie North (pictured below) was embedded with troops in 2003, and was reporting regularly on the Hannity show. On one occasion, Ollie reported high casualty rates within a particular Marine unit. Sean was so moved that he determined then and there that something had to be done to support the families left behind. Instead of holding out his hand to the government, he set a course to raise money to provide scholarships for the children of the fallen and injured. Kilgannon says that Hannity's effort has been invaluable in leading the charge for this tremendous task.

Greg also told me the tremendously moving story of two parents that he met last night.

Their son, Sergeant First Class Nathan Chapman was a member of the 1st Special Forces Group, and was the first combat casualty of the War on Terror. He was killed by small arms fire while leaving a meeting with tribal leaders in Afghanistan in January 2002. His parents, Lynn and Will Chapman (pictured below) decided to honor the memory and service of their son by starting the Nathan Chapman Memorial Fund. The Fund, part of the Freedom Alliance Scholarship Fund, provides scholarships for children of fallen soldiers in the Central Texas region, home of the largest Army base, Fort Hood. The fund has raised over $20,000 to date, and is preparing for its annual golf tournament in Georgetown, TX on September 10th and 11th.

On January 4th, 2002, near the city of Khost, Afghanistan, Sergeant First Class Nathan R. Chapman became the first American soldier killed by enemy fire in the War on Terror. Although mortally wounded, SFC Chapman heroically returned fire until losing consciousness and is credited with saving the lives of his comrades.

Greg called Mr. and Mrs. Chapman "the salt of the earth" when I spoke to him. It's easy to see why.

Remember that it’s not too late to attend a Hannity concert yourself; the only remaining show will be in New Jersey on September 11. I can think of no better way to honor the sixth anniversary of the tragic event than to attend a concert which benefits the children of America's military heroes who have been killed or permanently disabled in the line of duty.

I've already included a few of the pictures Greg took at the show, but be sure to view the slideshow below for more.