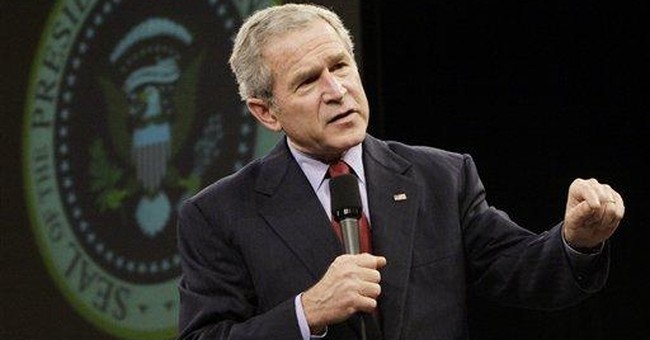 The Townhall.com community—including nationally-recognized radio hosts, columnists, and bloggers, readers who maintain their own blogs, and our conservative partner groups—regularly examines the need for strengthened conservative principles, and this week was no exception.

Brian, who first started his reader blog in July 2006, posted his analysis of conservatism in (“Does(R) Mean Anything Anymore?”) on Monday. After mentioning the universal health care concerns plaguing his state, he wrote:

This is the sad state of affairs that’s reached when conservative principles—once proudly enshrined in the self-definition of the Republican Party—are no longer even given lip service.

Townhall.com featured this post for most of the week and it caused quite a stir with our readers, who posted nearly 200 comments.

Another reader posed a question to the Townhall.com community earlier this week, a question which many conservatives have asked time and time again: do we really need so much government? Mick wrote that “more and more of our freedoms are being taken away,” citing a new law that bans the use of handheld phones while driving as an example. His comparison of the recommended hands-free earpieces to outlawed music headphones highlights the double standards of the government’s misplaced effort to regulate consumerism.

Last fall, Democrats tried to capitalize on the allure of conservative truths in their campaigns and, in some cases, succeeded. Dave recently cautioned his Townhall.com audience against accepting the Democrats’ continuing copy-cat rhetoric:

Don't get lulled into a sense of security that there are a growing number of ‘conservatives’ in the Democratic party. They are wolves in sheep's clothing….The conservative movement is growing, but in the electorate, not [in] the Progressive Democrats.

Dave is not alone in thinking that the Left is trying to hijack some conservative principles. Mike noted on his new reader blog that even so-called “green living” can be a conservative practice. “Conservatism at its core is life with less dependency,” he wrote.

It’s true that the environmental movement is engulfed with hypocrisy. Energy independence, however, liberates us from our reliance on foreign oil, most of which is controlled by radical ideologues or dictators,and presents another front on which we can defeat terrorism. This is not an issue best left to the emotional Left.

It’s no wonder politicians are vying to exhibit conservative ideals, according to another Townhall.com reader. In a post called “Conservative or Republican,” Jay wrote:

I have found that when you present the ideas of conservatism to people, apart from the labels, they embrace them wholeheartedly.  Politicians know this.  Look at the last election cycle and it is clearly visible.  Look at where candidates are aligning themselves for the upcoming Presidential election, and it becomes clearly visible.

Jay started his blog, Conservatively Speaking, just last week to explain why he is a conservative and is already getting attention. He concluded in this particular post that conservative principles are less complicated than some would have you believe. For him, the beliefs seem to speak for themselves—and are the only way to refocus the GOP for big and small victories in 2008:

Things within the Republican Party are not perfect. They never have been and they never will be. In our current defeatist culture,however, it is more important than ever to support those Republicans fighting for conservatives around the country, including President Bush. In a recent column titled “Conservatives Shouldn’t Abandon Bush,” popular radio host Mike Gallagher said that “liberals are emboldened by Republican-fueled criticism” and reminded readers that the Left has enough “hatred and contempt” without the assistance of frustrated conservatives.

Despite the Democrats' and the mainstream media’s best efforts to convince us otherwise, conservatism is thriving within the hearts and minds of the American people—and it will be the source of 2008 Republican successes.

Be sure to visit the Townhall.com Blogatorium at http://townhall.com/youropinion for the latest reader observations or to start your own blog. Your opinion counts at Townhall.com—and you may find your own thoughts featured here in the future.

Matt Vespa
Republicans Know What's at the Heart of Nancy's Edict for Masks on the House Floor
Matt Vespa
With Pipeline Operations Fully Restored, The Great Gas Panic of 2021 Is Officially Over
Matt Vespa
University of California System to Phase Out Standardized Test Requirement for Admission
Landon Mion
If You Suspected That Most Epidemiologists Were Complete Clowns, This Will Seal The Deal
Scott Morefield