The Joy of a Different Kind of Life 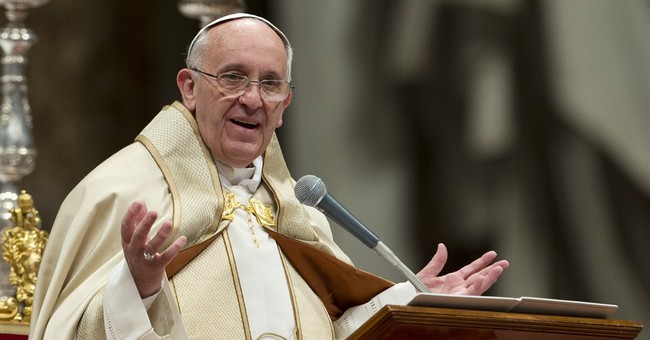 'Tis the season for charity -- all the world's inspired by the Christmas spirit once Thanksgiving comes around. You can't help but wonder about the rest of the year, though.

The word "solidarity" is a little worn, and, at times, poorly understood, but it refers to something more than a few sporadic acts of generosity. It presumes the creation of a new mindset that thinks in terms of community and the priority of the life of all over the appropriation of goods by a few.

The Sunday before we celebrated Thanksgiving here in America, Pope Francis held in his arms the remains of St. Peter, excavated from below St. Peter's Basilica in Rome in the 1940s.

He did so as the Catholic Church was marking the close of a year of celebration of faith, a year meant to remind us of some fundamentals, to make clear what has often been clouded by politics, division and cultural upheaval in the 50 years since the second Vatican Council. He did so in an outpouring, a plea and a prayer.

When Pope Francis held the first pope's relics in his hands, he said, "I believe in one God, the Father almighty, maker of heaven and earth." He asks the world: Do you believe? If you answer in the affirmative, what are you doing about it? How does the world see you? Do you know what you're saying? Do your words have meaning? Do words themselves have meaning?

Earlier in November, a main street in Philadelphia was shut down as thousands walked from a convention center there to the Basilica of Saint Peter and Paul, a procession sponsored by the Magnificat Foundation, a sister organization to a monthly devotional magazine. (Disclosure: I am a consultant to the Foundation.)

"What are they protesting?" one woman asked me.

Sin, is the answer.

As Americans fought stormy weather going into Thanksgiving, Pope Francis urged Christians to live lives that reflect the eternal joy they're called to: To live as though they believe in Jesus Christ! Regardless of your religion or lack thereof, this is something we should all support: Men and women of virtue and character in our midst make for better neighbors, better politics, better culture, better businesspeople and better lives.

In the streets of Philadelphia, on one of the first frigid nights of the season, the faithful gathered to give witness to what Pope Francis would urge a few weeks later: "The Eucharist, although it is the fullness of sacramental life, is not a prize for the perfect but a powerful medicine and nourishment for the weak." He called the Church "a place for everyone, with all their problems."

Many of the headlines about Pope Francis miss a central idea: If Christ is at the center of your life, it is a different kind of life; it is other-centered, it is mission-oriented, it leads you to the peripheries and is intolerant of indifference.

This is not new. But it is a reality that our dominant culture has decidedly, increasingly ignored.

Black Friday. Cyber Monday. Sales. Purchases. The image of the Magnificat Day of Faith in Philadelphia was Rembrandt's "Head of Christ," at the city's Museum of Art. "The entire canvas is covered in a dark brown background, like the shadow of sin that engulfs all humankind," Magnificat president Pierre-Marie Dumont reflects. "Then, from the very core of this abyss emerges a gentle light that warms without burning, that illuminates without blinding, that consoles without condemning," he continues. "Thus, from the heart of sin, grace flows forth."

Such a worldview is a matter of faith, but it's also a pillar that buttresses and enhances our democratic republic, culture and civilization. Pope Francis's ode to the joy of the Gospel was issued on the same day that the Supreme Court agreed to hear the plea of the Green family, owners of the Hobby Lobby chain of stores, to protect religious liberty and conscience rights in the business world. Heaven knows we need good people in business.

"Do not be afraid" is a constant papal refrain. Would you rather live afraid of who might walk into your life and tear it down, or would you rather live with the joy that hope, a purposeful existence and a merciful Creator makes possible? This should be easy to choose. The alternative is to keep the world in a darkness that Christmas lights only mask, if the holiday is only about things purchased with cash or a credit card, instead of perpetual, unmistakable gratitude.