Religious Freedom on the Brink 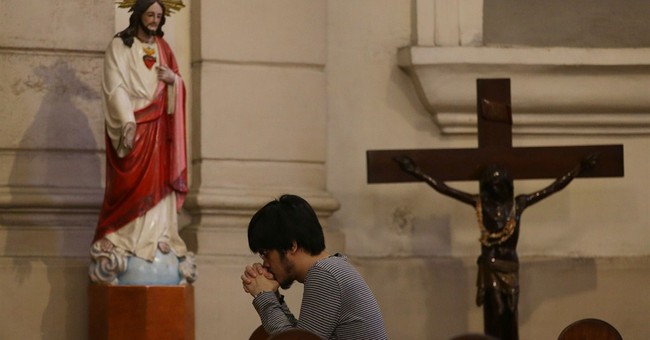 Who needs religious freedom? It's a necessary, if often unasked, question.

For a number of years now, there has been evidence of religious liberty being threatened in the United States. Due to the intensely partisan nature of our current politics, these warnings have frequently been ignored or dismissed. But are you willing to dismiss the Little Sisters of the Poor? They run homes for the elderly, and are now suing the Department of Health and Human Services in a class-action lawsuit -- the first against the mandate that was issued as part of the president's signature health-care legislation that requires coverage of abortion, sterilization and other measures that many religious people and organizations object to.

American exceptionalism has been a phrase used and abused and misunderstood, subject to projections and deconstruction of late. But is there something special here? An experiment in ordered liberty that gives people the right to follow the dictates of their religious duty? A democratic republic needs people of virtue, after all.

Right about now we need people to point out the obvious. In New York, as autumn was officially ushered in, an event at Columbia University considered our falling. It reviewed the Manhattan Declaration, a manifesto and movement of Christian churches drafted in 2009 to defend life, marriage and religious liberty.

At heart, it declares that God "has placed a design in his creation," as the New York's Cardinal Timothy Dolan put it. The Bible, our faith, nature, human reason and American wisdom all attest to this, he said. But "enlightened contemporary culture" wants very little to do with it all. Our culture feels it's beyond such outdated thinking. This attitude has toxic consequences.

At a New York dinner hosted by the journal Human Life Review, Eric Metaxas, a prolific author, issued words of caution: "It's one thing to live in a country where we can speak the truth, even though it be unpopular. But what happens if it becomes culturally uncomfortable to speak some truths, as it has on the issue of life and on the issue of traditional marriage?"

The state has, in essence, established a religion by insisting that some religious views are not fit to leave the church and enter public life. And it's not just the Obama administration that feels this way -- in New Mexico, the State Supreme Court recently ruled against a wedding photographer who didn't want to take pictures of gay nuptials, due to her religious beliefs.

We're not talking here about anyone standing in the way of birth control or barring the door to two men's wedding. Surely we have room here to disagree, even as we wish everyone well? And surely we have room here for actual debate? Not just at a Supreme Court/congressional/political level, but also in casual conversation, on the level of proposals about what the good life could consist of? That's an open question today. Do we have that right, or has the government foreclosed upon it?

At Columbia University, for the first time that one chaplain there can remember, the program for the Manhattan Declaration event had a mandatory disclaimer, distancing the university and its staff from the views expressed at the forum, lest anyone think that the enlightened folks there think religious freedom as our founders intended it is fit for their campus.

If we believe in freedom, about marriage and even over how we treat innocent unborn life -- the major human-rights issue of our era -- then we have to include the freedom to disagree. But as Metaxas put it, "When the government takes a stand and says we (have to) opt for this view over that one, we are in trouble." Now the Christian businessman and the Catholic sisters and the Christian photographer must comply, or else.

"At that point, religious liberty is threatened. And when that first of all liberties is eroded, all liberties will soon suffer," Metaxas said. "And America as we know it cannot any longer exist."

Reasonable people can disagree while still agreeing to ask: 'What's freedom and where would I be without it?' Some of us are beginning to get a better picture.

That which is not cherished and protected will be lost.