Hope Amid the Noise 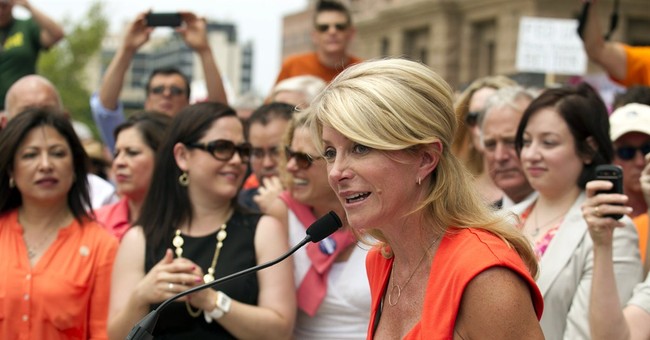 I made the mistake of walking away from my computer after hitting "play" on a Youtube video. All of a sudden, the room was filled with hails to ... Satan. This was the comeback from some Wendy Davis fans outside the Texas statehouse to opponents of the Texas legislator's attempts to kill a bill that would restrict some abortions (20 weeks and later) in the state. Given that Davis has become a heroine of our slouch -- if not plunge -- toward a culture comfortable with infanticide denial, the scene was fitting, and, I hope, jarring.

It came during a week that had begun, as they frequently seem to, with unholy exchanges on the Sunday morning talking-heads shows. In between praise to Davis on the various channels, a host asked a congressman how exactly a marriage between a man and a man and a man and a woman would make any difference to a child. Men and women are actually different. And yet we deny it.

These issues we debate are about the most intimate of issues, and we pretend they can somehow be solved by just the right politician or ruling. But there are also some basics we've lost sight of, or have decided that we have to dismiss -- even suppress. We do this as we embrace the pursuit of individual gratification, sometimes at the expense of life and liberty.

Another "hit play" moment came with the latest video from Live Action, a pro-life group that does undercover investigations in abortion clinics. In this video, a doctor explains how they induce labor in a late-term abortion -- "so you will deliver, a stillbirth." An "injection ... stops the heartbeat of the fetus. The doctor calls the multi-day process "hard."

"It's like you're having a baby, basically," the investigator posing as a prospective patient asks.

A counselor at the same Albuquerque clinic explains that if the woman doesn't make it back to the clinic in time -- "If we can't catch it early enough, which has happened," she'll want to call the clinic on her cell and "just sit on the toilet. You don't have to look at anything."

That's probably good advice to a woman who is being advised to deliver her dead baby into a toilet. But this isn't something the rest of us can afford to look away from. Whether it's a motel bathroom or a state-of-the-art women's clinic, this is a gravely miserable state of affairs, as we drown in euphemisms about women and health and freedom. Does anyone really think this is healthy?

We can bear these open windows into the grim realities of 40 years of legal, largely unrestricted abortion in the United States because we are also a nation filled with maternity home workers and crisis-pregnancy angels who just want to help women be the mothers they already are.

And we have hope, because people have not quit working to build a culture of life in society and politics. One of the most important events of this year happened under the radar in Rome this past month. Presided over by Pope Francis, young people in Rome prayed for mercy and peace for those touched by abortion, and for the grace to build something better.

Women have a tremendous power. Men and women together do, too. They can create life together, build families together and help societies make sense.

Today, we face a choice between talking about a Texas state senator's pink sneakers or confronting the misery felt by so many of our neighbors. Whatever we believe about religious faith or party politics or even abortion and same-sex marriage, there are alternatives to pretending that there isn't a natural order that can help us make sense of our lives, with, perhaps, a welcome supernatural element, helping make something better plausible.