A Different Type of Inclusion 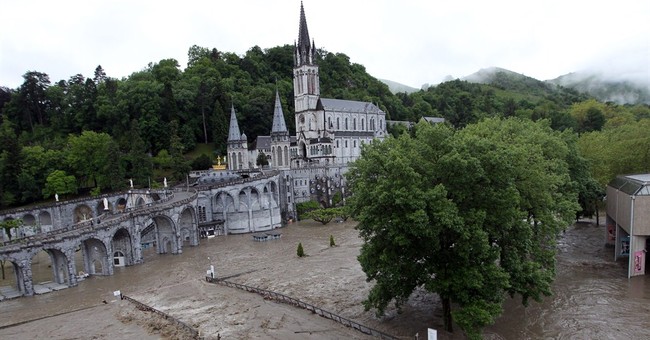 The scene was exotic enough to make an amateur photographer going for a walk instead sit down for the long haul. We were gathering on a grassy patch on the U.S. Capitol's grounds. The first to arrive were Dominican friars and religious sisters in full habit. Monks and nuns in attire out of another century certainly got the attention of passersby.

In truth, the faithful so attired were young -- the Dominicans' Province of St. Joseph, in the eastern part of America, has 18 men entering as novices this summer -- and engaged. They were here to lead evening prayer outside the Capitol.

They were spurred to do so by ongoing concerns about religious liberty in the United States. The prayer vigil on a Saturday night was one of the opening acts of the Fortnight for Freedom, a two-week period of prayer, fasting, and education, led by Catholic bishops, but of importance to everyone no matter what their faith.

The next morning, at Sunday Mass, Baltimore Archbishop William Lori, who had been present at the vigil, called the current moment "a perfect storm." He said, "Fewer people are practicing their faith while attacks on religion and on people of faith are accelerating, whether in the media or on college campuses or in social gatherings, to name a few."

That's the case here at home where what was once a precious, fundamental liberty has become a pawn of sexual revolutionary ideology and politics. And it's the case in Syria where a monk was killed during an attack on a monastery recently. We must be vigilant wherever the threats are; it's a matter of stewardship, human dignity, and gratitude.

"Segments of our government more and more are saying to us, 'You can worship however you wish but when you serve the needs of the poor or educate young people, you need to check certain parts of your faith at the door,'" Lori said.

"The fracturing of the family combined with the sexual revolution has put a great many people in the West on a collision course with certain fundamental teachings of the Christian faith," Mary Eberstadt writes in her important book How the West Really Lost God.

"The unprecedented proliferation of weakened natural families and nontraditional quasi-families has left a great many individuals resistant as they never were before to fundamental features of the Christian moral code," she observes.

Outside the Supreme Court, it was hard not to be moved by the desire on display for something more. You don't have to be a proponent of same-sex marriage to see the yearning for something good and beautiful. Still, redefining marriage -- like surrogacy markets and other reproductive political efforts involving such intimate issues -- isn't ours to rework. And yet here we are. We're in a time where people are trying to make sense of things, by making less sense, robbing words and even ourselves of the kind of dignity and purpose that has built not just civilizations but union with something eternal.

We all want "to love and be loved, to know and be known," as Fr. Paul Check, executive director of Courage, a Catholic group that ministers to homosexuals, recently put it. If we can figure out how to help one another in service and sacrifice, in union with the beautiful and the uplifting, in ways that make sense in a natural and supernatural order, we might just have some compelling, peacemaking proposals to consider together.

But that's a journey we cannot make yelling at one another over social media and in angry crowds, but in prayer and real, engaging debate, and the sharing of beautiful and painful struggles and triumphs of the human spirit.

On an evening before the news cameras arrived for the big political rulings from the judiciary, a passerby was fascinated and receptive. Perhaps the monks and nuns weren't a blast from the past, but a flash from our future together.