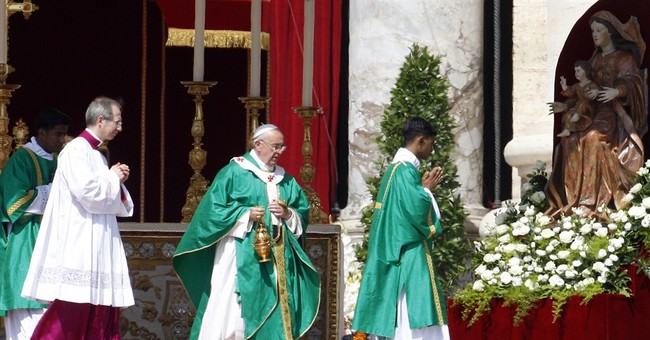 DENVER -- I've been spending the better part of the last week among Catholics who communicate. They're people of varied backgrounds and politics who love their church. We're at the annual meeting of the Catholic Press Association, where I've been asked to speak a few times. But what I've been doing more of is listening.

What I've been hearing is an acknowledgment that something's gone terribly wrong. Not that church teaching has to be overhauled, as is so often the assumption in media, but that we need to communicate better. We need to be more consistent witnesses of an alternative to the conventional.

Frank Bruni, writing in his New York Times column, recently excoriated the church for its continued encouragement to men and women with same-sex attractions to live lives of chastity. Bruni focuses on recent comments by New York's Cardinal Timothy Dolan, the best-known of any contemporary U.S. bishop, teaching that sexual love is "intended only for a man and woman in marriage." This, Bruni says, "assigns homosexuals a status separate from, and unequal to, the one accorded heterosexuals: You're OK, but you're really not OK. Upon you there is a special restriction, and for you there is a fundamental dimension of the human experience that is off-limits, a no-fly zone of the heart."

But what's missing here is the fact that there are many men and women who do not have same-sex attractions who are not married, but want to be. I met some of them, as I do just about everywhere, in Denver this week. One young woman talked about her desire for marriage, her desire to know that's her vocation, while acknowledging that she is already serving God as a single woman, at her job, in her community and among friends. She's not going to let what she lacks, and really wants, impede her gratitude.

It might, in fact, be a bit of an indictment of Catholic communicators -- both preachers and laypeople -- that Bruni can easily write: "Let's leave aside the legions of straight people, Catholic and otherwise, who aren't tucking their sex lives into a box that tidy, tiny and fecundity-minded." I don't know about the "otherwise," but Cardinal Dolan's primary obligation is to the Catholics, as a spiritual shepherd. And regardless of your sexual attractions, what Dolan said holds for all: Sexual union is a glorious one meant for marriage.

Which gets back to the discussions here this week. We live in the world. We know too many of us aren't taking what we say we believe seriously. A Catholic governor of New York made increased abortion access in his state a priority. A Catholic former Speaker of the House shut down a legitimate question about brutal late-term abortions, insisting the topic had some kind of "sacred ground" protection. And how many weddings have you attended in a Catholic church after the couple had already spent months, if not years, playing house? Living as though married, with only a party delayed, the "sacrament" performed only for the sake of nostalgia or pictures?

That one woman I mentioned echoes the thoughts of many young people I've encountered over the past few years: She loves God, she loves her church and she is open to sacrifice to do God's will in her life. There's a sacrificial aspect to our lives. While religious faith is a source of hope and joy, there is no escaping the fact that life can have its share of hell. We don't escape that. We seek to bring good to situations we wouldn't have necessarily scripted for ourselves.

Mother Dolores Hart is at this conference. Many know her as the nun who kissed Elvis. Dolores Hart had a successful acting career, having starred in two movies with Presley, among others, but found herself called to a life of contemplative prayer. She now emanates wisdom and peace, but recalls crying herself to sleep for the first seven years in the convent. Sometimes we don't understand all the reasons why we are where we are.

In her memoir, "The Ear of the Heart," Mother Dolores writes: "To enter the contemplative life truly, you have to go through a narrow, lonely place in your being, where you face all your fears and selfish patterns, even when you don't know what these are. I thought I was very grown-up, very mature. You don't realize what a child you are until God tests your heart and you go through that deep place all of us have to go through."

A key question of the day: What are we here for? We may just be here for one another, but not in the ways that culture assumes. The Catholic Church, throughout the country and world, offers opportunities for spiritual growth and temporal support for all. The church is for sinners, and that will be all too evident at times, but she does offer something: not utopia, but a way to journey together to something beautiful and live in union with the source of all beauty.

In his Times column, Bruni admits to sadness upon witnessing hypocrisy. That's an overwhelming reality of our day. I'm sorry we are all so damn human, or the overwhelming countercultural witness of real Christianity would be inspiring and uplifting. That's the only successful communications strategy for a church: Be for real.

Is This the Most Embarrassing Anti-Gun Op-Ed Ever Written?
Townhall
'She's OLD, she gets cold': Taylor Lorenz posting pic of her thermostat set at 90 pisses both the Right AND the Left off
Twitchy
Durham: Hillary Clinton Lackey Testifies She Signed off on Pushing False Alfa Bank Story
Redstate
APPALLING: Teen Girl Disappears at NBA Game and Turns Up 11 Days Later in Nude Photos on Sex Trafficking Site
PJ Media