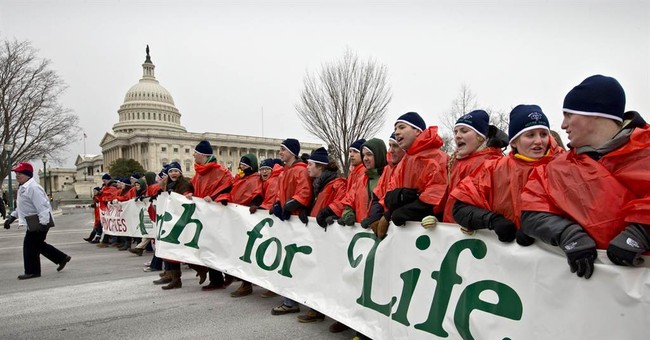 "I think it's without question that pregnancy to a woman can completely disrupt her life."

In 1971, Sarah Weddington argued in front of the Supreme Court that pregnancy is a burden women ought to have the legal option to be freed from. In New York City today, the most recent numbers available show that two in five pregnancies end in abortion; the rate is 60 percent if the child in the womb happens to be black. Statewide they are lower, but still execrably high. In the midst of this abysmal culture of death, Weddington recently joined the Empire State's governor in insisting that abortion access be expanded there.

Which leads to a question -- do we, as a culture and as people, actually prefer abortion? Has the rhetoric shifted from "safe, legal and rare" to "safe, legal and frequent ... even expected"?

That sounds quite miserable. If we don't actively prefer abortion, it seems that we too often have come to accept that abortion is a necessary problem-solver, whatever the cost. We've come to ignore or simply erase life and its inherent dignity, its potential and endless possibilities for redemption.

Americans have deep empathy for a woman who finds herself in a difficult situation, and they want to know that she'll be safe. And so stories like the recent one in El Salvador, where a woman sought an abortion and wound up instead giving birth to a child who could not survive on her own, or the tragic tale of Savita Halappanavar, the Indian woman who died in Ireland, get international attention. Savita, it was claimed, died because she could not obtain an abortion. In truth, the investigation made clear, she died of an infection, and not because an abortion was not performed on her.

This verdict did not receive as much press as her death did, of course. All too often, we form opinions without knowing the facts of the matter.

What is never made clear is that being pro-life does not mean that a woman loses her right to life. It is an abortion regime that insists that there are not two patients in the equation: the mother and the unborn child.

In arguing for what would become the right to legal abortion, Weddington went on to say: "If the pregnancy would result in the birth of a deformed or defective child, she has no relief. Regardless of the circumstances of conception, whether it was because of rape, incest, whether she is extremely immature, she has no relief."

Marriage and babies can actually help mature us! Great sacrificial experiences build character and make heroes of everyday women and men. There's relief there, if we look for it. There is sacrifice but there is also joy. What is the purpose of our lives, anyway? With all our "progress" in medicating fertility, not only is it not foolproof, leading to heartache and tremendous expense, we still die, after all. Science, like life, has its limits. In facing our challenges, we can learn and live and love more fully.

Serrin Foster of Feminists for Life views Weddington's posture an unintentional betrayal of women. "As her arguments for abortion before the Supreme Court made clear, Weddington saw the discrimination and other injustices faced by pregnant women," Foster says. "But she did not demand that these injustices be remedied. Instead, she demanded for women the 'right' to submit to these injustices by destroying their pregnancies."

Weddington, and the feminist movement that has long embraced legal abortion, "discounted the strength of women to overcome obstacles, and the resolution of society to support mothers," Foster argues.

Supporting Andrew Cuomo's "Women's Equality Act," which, among other things, would allow non-doctors to perform abortions in the state, Weddington said: "New York was the state we looked to. Around the country, women always said, 'If you can, just make it to New York ...'"

Real leadership would march us out of this morass. Women deserve better than believing they have a right to escape pregnancy through murder. Women and men need support in embracing life in all its challenges and fruitful operations.