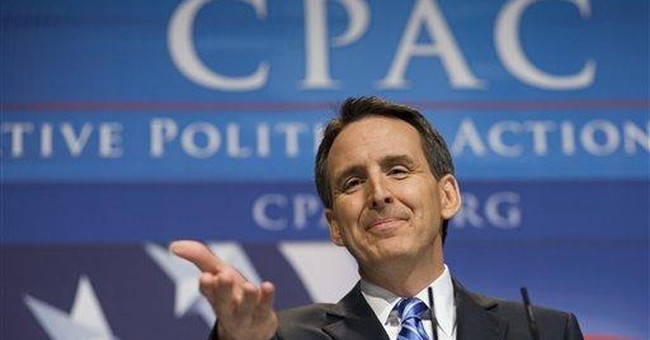 "Our values are under attack and under siege." These words, delivered by Minnesota Gov. Tim Pawlenty summed up the palpable feeling at a gala just a block away from the White House, days after President Barack Obama's health-care legislation passed in the House.

In many ways, the annual dinner for the Susan B. Anthony List was an awkward gathering. SBA List is the pro-life answer to Emily's List: Where Emily's raises money for candidates who back legal abortion, SBA List aims to elect those who oppose it. But despite the defeat and the sense of siege, Pawlenty lifted up the room -- humbly, realistically and generously. His speech sounded natural; even, at times, off-the-cuff.

Pawlenty is not flashy. In fact, when he tries to jazz up his approach -- as he did with a Tiger Woods joke during a recent speech -- it doesn't quite work. If you compare him to other Minnesota politicians who have garnered national attention -- former governor Jesse Ventura and Sen. Al Franken come to mind -- he's positively Wonder Bread. If you compare him to Rep. Michele Bachmann, also a fellow Gopher Stater, he might look like a moderate. But declaring himself a "constitutional conservative," he's positioning himself firmly as a man of the Founding documents. He's not going to drive people wild like Sarah Palin does. But does a presidential candidate really need to?

Pawlenty needs to be viewed in the context of Obama. After a president who promised everything and nothing in the form of a lot of historic, comprehensive and broad -- yet pedestrian -- campaign rhetoric, and still ran a perpetual campaign after inauguration, people may be looking for someone a tad plainer, with a firm and concrete record. They may be looking for someone who stands for the Constitution, instead of state attorneys general suing over the landmark legislation of the current administration.

Obama's a good comparison, too, when you consider Pawlenty's remarks about Bachmann, who was also in attendance at the dinner. He called her "one of the finest leaders in our country." But he didn't leave it there. "She has guts. She has brains. She has integrity. She has determination. She has persistence. She has the skills, ability and passion to change this country. ... My face just lights up when I see her." This was smart politically, because Bachmann is popular among many conservatives. But such a full-throated endorsement was not exactly playing it safe. Bachmann has been known to open a can of worms or two -- an interview she did on "Hardball" nearly cost her her House seat. One gets the impression the term "throw someone under the bus" wouldn't be used quite as often in a Pawlenty era.

Although Pawlenty does have a series of pro-life initiatives under his belt, during his SBA List speech he didn't offer a laundry list so much as outline his vision and give a sense of his grounding, as a man who is hoping to have a long relationship with the activist, pro-life crowd. He warned of a "damaging, corrosive, devaluing" direction that America has been on since Roe v. Wade. "We see it in the chatter. You see it in the debates. It includes things like, you know, economic security is more important than human life."

He didn't make the connection explicit, but his comments came shortly after a supposed pro-life Democrat, Rep. Bart Stupak, who later voted for the health-care package, jarringly reported that Democrats were arguing for the abortion-funding health-care legislation in part on economic grounds: If fewer babies were born, (costs) would be lower. Such talk is endemic, Pawlenty said, of a "slippery slope" you're on "once you open the door to say that life can be devalued, life is negotiable, life can be bargained away."

Pawlenty's got a natural smile that goes along with his optimism. Among the activists, he talked in terms of "healing," laced with some inspiring quotes he took from both his morning Bible study and a Reagan inaugural. "America is in trouble," he says bluntly. "We've got a financial crisis that seems out of control. We have great uncertainty in ... our national-security posture." Most alarmingly, he feels that "all of these values that we share, that we hold dear are one generation away from being extinct or forgotten or diluted."

Which is why you keep involved, he affirmed: "In the end, ideas matter." Twice in his speech, he stressed the need to move the ball forward on values and principles in elective office: "We have to make sure that we do what we say we are going to do." To this largely conservative audience, his pitch came across as a believable vision -- one that taps into Reagan's devotion to First Things, and echoes the Gipper's morning-in-America imagery. Pawlenty is offering a message similar to that of others on today's right, but he is doing so in a way that is exceedingly plainspoken. Which may be exactly what his broader audience could be craving in the election of 2012.