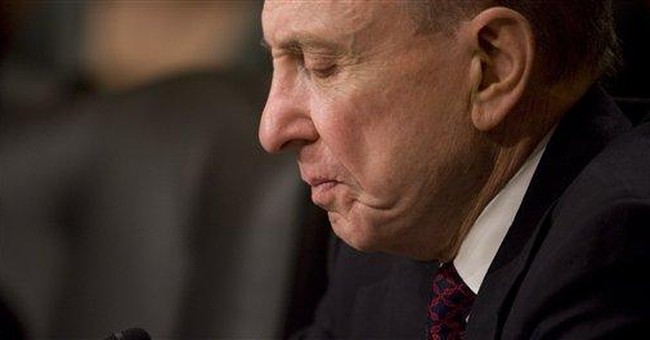 Los Angeles -- For one afternoon, it seemed like the story of longtime Pennsylvania Republican senator Arlen Specter switching parties was serving as the capstone of the much-hyped 100 Days of President Obama celebration; the triumphal touting of a decisive blow dealt by the Democrats against the loyal opposition.

As April 29 began, the president and the vice president stood with Specter at the White House for a morning photo op. The Democratic message was clear: Not only did we win but we keep winning. The Republicans lost big in November, and it's just getting worse for them and better for us.

It's a wonder that Al Franken, former "Saturday Night Live" player and increasingly likely Democratic senator from Minnesota, wasn't in the audience, in the role of icing on the victory cake.

Obama and his cheering squad were both right and wrong. The likely Democrat-Republican vote divide in Congress, 60-40, does not bode well for Republicans -- especially considering that the Franken accession, if it happens, will mean a filibuster-proof majority in the Senate for the president and his party.

The next morning, Vice President Joe Biden appeared on morning television and announced, amidst the media feeding frenzy over swine flu, that he wouldn't -- and has advised his family not to -- go near planes, trains or just about anything short of an open field, as if those geographical expanses might be the only safe havens for flu-averse Americans. It was incredibly reckless, ridiculous and very Joe Biden.

But it cast the Specter story in a perverse light of hope: things can change in but a political moment for either party. In other words, the notion that a signed, sealed and delivered paradigm shift has taken place in America is false, and therein can be found hope for the Republican Party. Though the president maybe popular overall, some polls suggest that Americans are still undecided about their new commander in chief.

In times of adversity, the right must be active. In a 1970 interview, the late conservative icon William F. Buckley Jr. said it best: conservatives must keep an "alternative landing field in operation." During their time in the political wilderness, Republicans and their fellow happy warriors should take time to regroup and renew. The right has to present and maintain a viable alternative for Americans, because eventually the country will need to safely return to the ground.

At some point -- and in an atmosphere of bankruptcy, bailouts and ersatz economic stimuli, it could be sooner rather than later - Vice President Biden will let the cat out of the bag: that Democrats, too, are uncertain of their future. With the American jury out on the new gang's policies, there's a strong possibility that in a few years -- say as the next presidential election is approaching -- voters will look for a pragmatic, sensible alternative to the lofty left.

I was reminded of Buckley's sage words during a panel at the Milken Institute in Beverly Hills, where I was speaking in the wake of the Specter switch, on the 100th day of the Obama administration. During a session after mine, Les Moonves, the CBS executive notorious for taking a very expensive, and perhaps unwise, gamble on Katie Couric, was optimistic. Everyone on the panel -- the founder of popular video Web site hulu.com, a moviemaker, a journalist -- was optimistic. It wasn't just putting on good game faces either. It was a matter of seeing opportunities and embracing them.

Figure out what you do best, and do it. Will Internet cannibalize broadcast TV? Maybe. But maybe it's just another opportunity for CBS to get their product in front of more eyes. In politics, too, it would be wise to embrace the opportunities that drastic change brings. It's not every day you get the time and space to study, teach and hone your ideas. Yes, it's the worst of times for Republicans and the right. But it's also the best of times. Whatever party Arlen Specter belongs to, President Obama doesn't have to be an end for the right, but a new beginning.

Let Them Destroy Each Other
Townhall
BUSTED: It turns out the self-proclaimed 'most high-profile Hispanic Democrat in the City of Miami Beach' isn't Hispanic
Twitchy
The Feds Are Forced to Release January 6th Surveillance Footage and Narratives Crumble
Redstate
Worse Than Carter? Meghan McCain Obliterates Biden—AGAIN
PJ Media