Remembering the Compassion of Bhutto 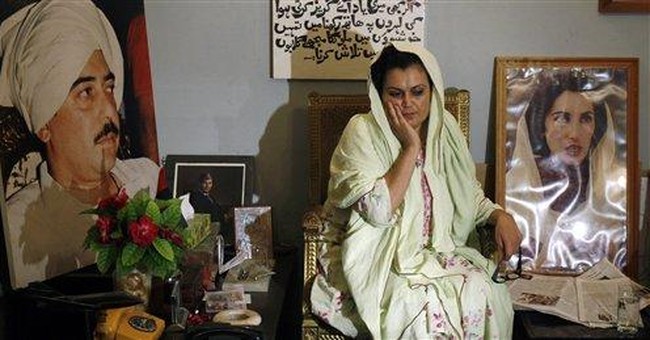 Sure, Hillary Clinton made use of the former Pakistani prime minister's assassination on the campaign trail. It was legitimately a major world event two days after Christmas and a week before the Iowa caucus. Anyone running for president who wanted to be taken seriously had to address it. But for Hillary, it was also an opportunity for a woman who wants to be feminist-in-chief to remind people that she and Bhutto shared a gender bond, something no one else running for president can do. But Clinton didn't get into too many details about the type of woman leader Bhutto was. Clinton talked about how they related as fellow mothers -- general stuff that she would ultimately get grief on the Internet about, for forgetting how many children Bhutto had.

Clinton's lack of depth was not an anomaly. The National Organization for Women was noticeably silent about the first democratically elected female leader of a Muslim country. NOW's Web site was stuck on stupid with a "naughty list" of toys that promote gender stereotypes instead.

One thing Clinton certainly didn't do is remember the good times she and Bhutto shared as leaders at the United Nations' infamous Fourth World Conference on Women in Beijing, in 1995. At the conference, the two women were on opposite sides, one Ivy League grad arguing for every girl and woman's right to abort innocents (that would be then first lady Clinton, who earned her law degree at Yale), another Ivy League grad arguing to protect all human life (Bhutto, a Harvard alum).

Bhutto wasn't perfect by any stretch. Her tenure was riddled with corruption, she had friends we'd call enemies -- but she still managed to offer the world an alternative model of feminism. As she argued for protecting the most innocent, she sounded more feminist than those who claim to speak for all women. In a speech at the opening of the gathering, she warned: "To please her husband, a woman wants a son. To keep her husband from abandoning her, a woman wants a son. And, too often, when a woman expects a girl, she abets her husband in abandoning or aborting that innocent, perfectly formed child."

In reporting at the time, her speech was explained as being a condemnation of violence against women. Fair enough. But it was more than that: She was arguing against the forced abortion of female babies, and she was also arguing on behalf of innocent human life.

Bhutto heard "the cries of the girl child," and she said: "This conference needs to chart a course that can create a climate where the girl child is as welcome and valued as the boy child."

Serrin Foster, executive director of the group Feminists for Life, emphasized in a statement memorializing Bhutto, "Bhutto also refused to choose between meeting the needs of women or between protecting unborn children from abortion." Foster pointed out that Bhutto called the common practice of gender-selected abortions "tragic," and said it "still haunts a world we regard as modern and civilized."

Some will dismiss her as having no other choice. As the head of a Muslim country, she had to be against abortion. Even if that was the case -- and she's no longer here to tell us what was in her heart -- she offered a legitimate model for what Pope John Paul II referred to as "new feminism."

In his encyclical "The Gospel of Life," issued earlier that same year, the pope wrote: "In transforming culture so that it supports life, women occupy a place in thought and action which is unique and decisive. It depends on them to promote a 'new feminism' which rejects the temptation of imitating models of 'male domination' in order to acknowledge and affirm the true genius of women in every aspect of the life of society and overcome all discrimination, violence and exploitation." I won't pretend John Paul II would endorse all Bhutto did or that Bhutto, a Muslim, would have signed onto the Catholic leader's whole "Gospel" (or Gospel), but there was a synergy there, one not to go unnoticed as we remember Bhutto.

At a reception before the world conference, Hillary Clinton said: "I have very high hopes that this will not be just a lot of talk but will enable us to learn from one another."

I agree. Let's start by keeping Michigan primary campaigners warm by throwing old copies of Ms. Magazine in one big bipartisan bonfire and embracing a life-affirming model of feminism. Liberal feminism and its abortion fetish is not a gender mandate. Bhutto seemed to know this. American feminists could remember her by considering that wisdom.