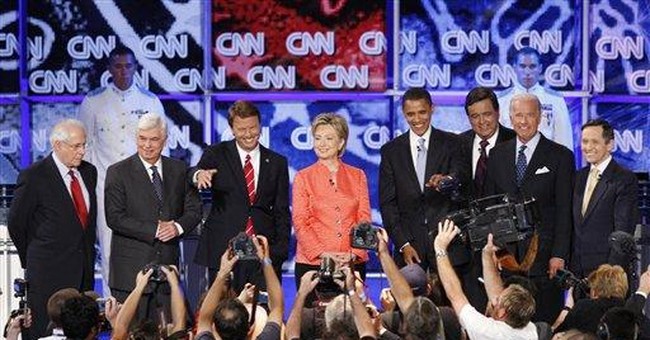 Democrats missed a real opportunity during the July 23 CNN/YouTube debate to declare themselves proudly pro-choice. Not on abortion, but on education.

During the unconventional debate, Sen. Joseph Biden, D-Del., could have done it easily. He's been an advocate for giving poor families the same opportunities wealthy families have: moving kids out of failing public schools and into private ones.

Unfortunately, his admirable position wasn't clear during the debate. Asked if candidates would send their children to public or private school, Biden's answer sounded positively apologetic. He said that, after his wife and daughter were killed in a car accident, his two sons went to the private Wilmington Friends School, where his sister taught. When it came time for high school, he sent the boys to a Catholic school: "I'm a practicing Catholic -- it was very important to me they go to a Catholic school, and they went to Catholic school."

Biden should be proud of the choice he made, and this came through somewhat when he talked about high school, but he retreated from that when he ended his answer with what seemed to be a misplaced mea culpa: "My kids would not have gone to that school were it not for the fact that my wife and daughter were killed and my two children were under the care of my sister, who drove them to school every morning."

Perhaps it was the stress of the moment or the personal nature of the question. For, on the Senate floor, Biden has seen the American education landscape more clearly: "When you have an area in the country -- and most often here we are talking about inner cities -- where the public schools are abysmal or dysfunctional or not working and where most of the children have no way out, it is legitimate to ask what would happen to the public schools with increased competition from private schools and what would happen to the quality of education for the children who live there."

He's right to embrace alternatives for Americans of all income brackets. School choices, studies find, raise graduation rates, and -- as Jay Greene of the Manhattan Institute has pointed out -- "result in higher test scores for both the kids who use them and the kids who remain in public schools."

Supporting school choice is, frankly, a populist position. Most Democrats would have adopted it by now if they weren't so beholden to teachers' unions and other liberal pressure groups.

It's a position you'd think Barack Obama should be taking -- heralding a message of empowerment and civil rights. But in that same debate, the Illinois senator explained: "My kids have gone to the University of Chicago Lab School, a private school, because I taught there, and it was five minutes from our house. So it was the best option for our kids." Makes sense to me. But he, too, sounded defensive for absolutely no reason. He went on to explain that "there are some terrific public schools in Chicago that they could be going to. The problem is, is that we don't have good schools, public schools, for all kids."

Which is why, Obama, families should have the choice -- public or private. But on July 5, Obama was bashing No Child Left Behind at the National Education Association's annual convention, referring to procedures as "abandoning" public schools.

In "The Audacity of Hope" (Crown, 2006), Obama wrote: "When we as a society pretend that poor children will fulfill their potential in dilapidated, unsafe schools with outdated equipment and teachers who aren't trained in the subjects they teach, we are perpetrating a lie on these children, and on ourselves." He ought to look at the test score numbers. The statistics have made other liberal Democrats (Sen. Dianne Feinstein, D-Calif., Gov. Eliot Spitzer, D-N.Y.) take a look at school choice. It's the new civil-rights movement, and the Democrats should all embrace it for the children.