We Mustn't be Afraid to Call The War a War 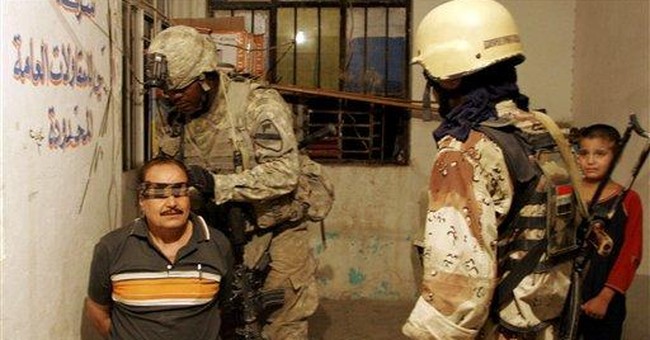 We in the West face a grave threat from militant Islam, and an even graver threat from our propensity to ignore or redefine Islamic fascism. This is especially true when we adopt politically correct terms to refer to our enemy.

Days after the attempted terror attacks in London and Scotland, and just before the anniversary of the July 7, 2005, bombings in the London Underground by Islamic radicals, new British Prime Minister Gordon Brown took the deluded position of prohibiting his administration from using "Muslim" in reference to terrorism. Brown also ordered his government to avoid referring to a "war on terror" or "terrorism."

Delusion as a state policy? What a way to win a war.

And Brown's irrational attitude has trickled down to his staff. BBC reporter Alan Johnston was recently freed after almost four months of being held hostage by the terrorist group Hamas. And so, naturally, Brown's foreign secretary, David Miliband, praised the terrorists for being so kind as to release the journalist: "I'd also like to recognize the priority that has been given to this issue by President (Mahmoud) Abbas and also by the leadership of Hamas, including Ismail Haniya." This is the same Hamas that, not too much earlier, strapped Johnston in a vest packed with explosives.

This is not the talk of a West that is ready to confront the existence of Islamic terrorism, let alone win a war against it.

Here in the United States, the media, in large part, has already been implementing Brown's policy of tiptoeing about the radical Islamic fanaticism, which is a root cause of this war. Last year, when European streets ignited after a newspaper editor in Denmark ran a series of cartoons depicting Muhammad, U.S. media outlets like CNN refused to show the cartoons out of a sense of "respect." Unfortunately, showing the cartoons could have sparked a realization among many in CNN's audience about the militancy of those we fight.

Two summers ago, New York Times columnist David Brooks asked: "Today, public opinion is turning against the war not because people have given up on the goal of advancing freedom, but because they are not sure this war is winnable. Why should we sacrifice more American lives to a lost cause?"

On his best days, George W. Bush, who understands the threat we face, can answer Brooks' question: We are in a fight for our survival. The president used the Fourth of July to stress why what we're doing in Iraq is important: "However difficult the fight is in Iraq, we must win it -- we must succeed for our own sake; for the security of our citizens, we must support our troops, we must support the Iraqi government, and we must defeat Al Qaeda in Iraq."

Right now, Britain is set to pull out of Iraq, and Americans are pining for an end to our own involvement there. Our security -- and the security of our allies in the region -- is at stake, and we need to face facts. We are in a war that was started by militant Islamic terrorists. But if we can't even get the words right, if we can't face fundamental facts, we can't win the war.