Why Do We Still Look to Al Sharpton? 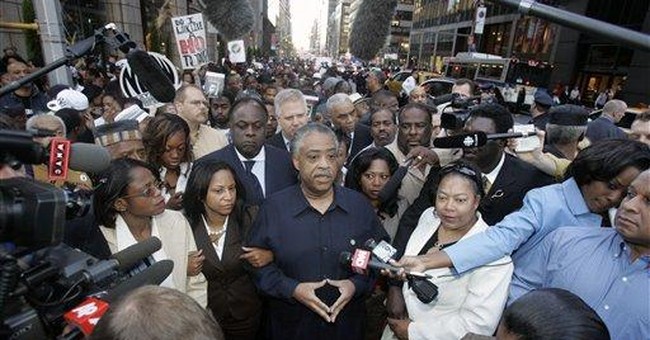 Al Sharpton is an amazing man. He will never be silent. Whatever the news story, he will find an angle. Wherever the largest contingent of cameras happens to be gathered, he will be there.

There he was running for president; there he was attacking three innocent kids from Duke on erroneous charges of rape; there he was being the moral arbiter of what should be heard on the radio.

How does he do it?

In truth, that's not the most interesting question -- finding where news cameras are is not brain surgery -- trust me, I do it for a living. The real question is: Why the heck do we care what Sharpton thinks?

We keep running to him. We keep listening to him. Most recently, he commandeered the news cycle of Paris Hilton's jail travails (and even met with Los Angeles County Sheriff Lee Baca). Opinions vary on Paris -- love her, hate her, feel bad for her, be indifferent to her -- but surely, we can all agree that Sharpton has nothing of interest to say about her?

We need to remember that Sharpton is not the civil rights leader he claims to be. He lacks credibility. Serious people shouldn't listen to or court this buffoonish publicity hound. So here's a refresher course in the History of Sharpton. Recall some proper nouns: Tawana Brawley; Freddy's Fashion Mart. Keep them in your wallet in case you're ever tempted to listen to The Rev. Al.

When most Americans think of someone who represents the opposite of racial harmony, a name like former Ku Klux Klan leader David Duke probably comes up. But somehow Al Sharpton gets to be a good guy -- even though he dragged the names of six innocent white men through the mud in the phony rape case of Tawana Brawley back in 1987. Sharpton gained notoriety through the rape charges made by teenager Brawley; it was subsequently discovered through a grand-jury hearing that all of her charges were completely made up -- yet Sharpton has never apologized for his involvement in the horrendous case.

In 1995, a dispute broke out concerning Freddy's Fashion Mart on 125th Street in New York. The white, Jewish owner was accused of driving a black storeowner out of business. Sharpton held protests against him, and announced -- as protesters yelled about "bloodsuckers" -- that "there is a systemic and methodical strategy to eliminate our people from doing business off 125th Street. I want to make it clear ... that we will not stand by and allow them to move this brother so that some white interloper can expand his business." A Sharpton deputy announced: "We're going to see that this cracker suffers. Rev. Sharpton is on it." A protester, three months later, would walk in there with a pistol and burn the store down, killing eight. I wouldn't go so far as to blame the deaths directly on Sharpton, but he didn't help matters.

There's more, but this should be enough of a trip down memory lane for any reasonable person to wonder: Why does anyone listen to this man? Why does anyone go to him for guidance or healing or any other nonsense? Why don't Democrats ostracize him?