There's No Negotiating With Iran 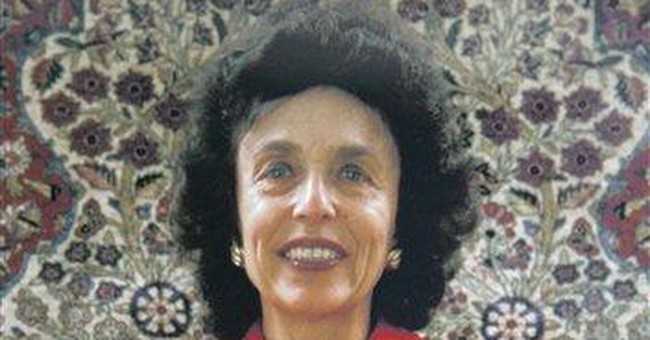 It's not 1979, and we're not watching it every night on television. But Iran has taken hostages again. Does anyone care? The sounds of near silence out of Washington suggest, "not as much as we should."

On May 8, the tyrannical regime in Tehran formally arrested a 67-year-old grandmother, Haleh Esfandiari. Not a sailor or marine -- like the 15 Brits Iran held hostage earlier this spring -- Esfandiari is a U.S.-Beltway-policy wonk: She is director of the Middle East Program at the Woodrow Wilson Center for International Scholars. She was forbidden exit from the mullahcracy, where she had been to visit her sick mother. At the airport, her passports were taken, and she's spent 2007 under house arrest -- and is now in the hellish Evin Prison. The regime says she's a pawn of the evil neocon Bush administration's plot to take over Iran.

Esfandiari is not the only American recently taken hostage by Iran. Her prison mate is another supposed American spy: Kian Tajbakhsh, a sociologist from the Open Society Institute (a New York group that promotes democracy). Iran has also detained a peace activist named Ali Shakeri and a journalist, Parnaz Azima, from the Persian version of Radio Free Europe/Radio Liberty. A fifth American is missing there: Robert A. Levinson, a former FBI agent. (You can imagine what they think of him.) That a number of these Americans do not exactly sound like likely members of the vast-right-wing-Jewish-conspiracy to do Zionist and Ugly American bidding means nothing to the terror regime in Iran, which thrives on "Death to America" and "Death to Israel" propaganda.

The news of the Shakeri arrest came down from the State Department days after the United States held talks with Iran for the first time in 25 years. While I don't have easy answers ready for how to solve the problem that is a nuclear, jihadist Iran, I also have the hardest time squaring these negotiations with President George W. Bush's brave and morally clear insistence of "you're either with us or against us." He named Iran as part of an "axis of evil," encouraging terrorism against American citizens, of the sort we saw when jihadists killed some 3,000 Americans on our soil, none too far from where I work and live.

As its humiliation of Britain earlier this year proved, Iran is clearly in the mood to test how far it can go -- how much the United Nations and the United States will let it get away with. The answer appears to be, pretty far. A recent report from the International Atomic Energy Agency tells us that over the course of a year, Iran has gone from 164 centrifuges to 1,312. Maybe 8,000 by year's end? Clearly, we have no time to be messing around. I'm all for diplomacy in general -- but with Iran? The country fomenting violence against our troops and allies in Iraq? The country that wants to wipe Israel off the map? The country that answers our diplomatic olive branches with hostage-taking?

But we're in diplomatic mode anyway. A diplomatic mode that -- with the names Parnaz Azima, Haleh Esfandiari, Ali Shakeri, Tajbakhsh and Robert Levinson on our minds -- should have all Americans angry, nervous, and praying that the Bush administration is working on something good they're keeping close to the vest. Praying that they are as skeptical of Iran as they should be. Praying that they are willing to put in place a debilitating sanctions policy and send clear signals of support to the good men and women of Iran who want another kind of life there, free of the terrorists who run the country.

George W. Bush has had his good moments of leadership on Iran. A big believer in the yearning of all men and women for democracy, he's sent signs to the democracy activists and dissidents in Iran, some of them being held in the same Evin Prison some of our American compatriots are in right now. But, as far as we know, they are not getting the help they need from us, the West. The State Department presumably won't be as outraged as it should be by the abduction of American citizens because they care about "engaging" those who would rather talk about "Death to America." Something's got to give. And it better be us making them do the giving, one way or another.