Hey, Rudy, not so fast 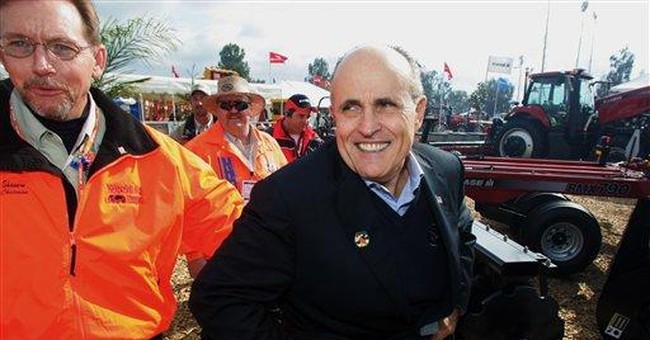 Will Rudy Giuliani be the right's guy in the 2008 presidential race? It's still way too soon to be sure, but conservatives are flirting seriously with the former New York City mayor. Yes, the same mayor whose file photos will forevermore show him dressed in drag. The same mayor whose marital infidelities will be chronicled permanently in newspaper archives.

Rudy and the right? It's not the most obvious fit, but it's a marriage that could work. Let's just say they're dating but agreeing to see other people right now.

Even though no one will vote in a primary until next year, the presidential race is already prominent on the minds of the politically active. At a recent Beltway party, a friend who is a devoted social conservative explained, and I paraphrase, "Even if abortion is legal in this messed-up post-Roe country, I can choose to not have an abortion. I can counsel you not to have an abortion. I can even choose not to hook up with anyone in the first place. But I can't kill the jihadists. I need the government to do that."

Her point is a conservative one: National defense is what the government really needs to be involved in. So which presidential contender really understands this concept?

Rudy, was the answer she argued. She respects Sen. John McCain, R-Ariz., for his service to our nation -- tortured in Vietnam as a Marine -- and wants to like former Massachusetts Gov. Mitt Romney. But on a cold February 2007 night, weeks before even a pre-primary debate, she looked at the field and was most naturally drawn to Giuliani.

Days later, the former federal prosecutor who stared down the mob was on Reaganite Bill Bennett's radio show channeling former Sen. Rick Santorum, R-Penn., talking about the Islamic terrorists' war on America. Santorum lost his re-election bid while warning of "the gathering storm" -- the war "Islamic fascists" are waging on America. He wasn't thanked by voters for his leadership (he lost his bid for re-election this fall), but he gets it. Giuliani, who was there when America's enemies attacked on Sept. 11, gets it too.

But what about abortion and marriage? Giuliani has already helped himself with social conservatives by saying early on that he would appoint judges in the mold of Chief Justice John Roberts and Justice Samuel Alito. These are things conservatives want to hear -- at least a start.

Right now, the conservative movement is longing for the second coming of Ronald Reagan, and no candidate is truly wowing it. Rudy is looking to step in and make this his moment. He's getting more than his share of help from writers on the right. Columnist Deroy Murdock has made the case that abortions went down in New York during his tenure and has written that "conservatives seeking a proven leader to lasso taxes and rein in runaway spending have a natural choice for president: Rudolph W. Giuliani." Steven Malanga of the Manhattan Institute also fondly recalls Giuliani's term as mayor. "The private economy, not government, creates opportunity," he said. "Government should just deliver basic services well and then get out of the private sector's way." These things, too, will help with social conservatives already attracted to the Brooklyn-born tough-guy executive.

I'm not sold on the Rudy idea quite yet. Like many conservatives, I watch the rock-concert-like crowds that Obama attracts and think, "We could really use a superstar." But I also would like a Republican nominee who is an all-encompassing leader. He may not be running for priest-in-chief, but it would also be nice to have a president who's not a cad-in-chief, fodder for daily tabloid headlines.

In other words, character matters. Now, is character also telling Yasser Arafat you have no place in my city, as Giuliani did as mayor? You bet. However, that's also Romney refusing to give protection to the former president of the terrorist state of Iran when he was speaking in Massachusetts last year. The exciting thing about this presidential cycle is that although it is painfully long, it also gives us the opportunity to really get to know the candidates -- the good, the bad and the ugly.

The bottom line? The guy who will clearly stare down the jihadists will ultimately earn conservative votes. That may be Giuliani. For now, however, I'm holding out for a leader who comes with even more than that -- the one who knows not only that we have a civilization to fight for, but also understands that marriage and the preservation of human life are essential to keeping that civilization going. That may be Romney.