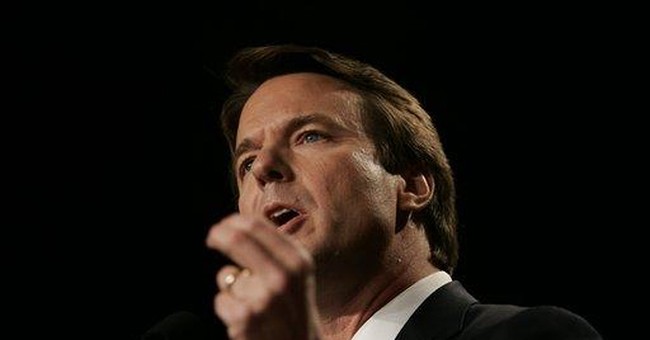 Early in this new year, Democratic presidential contender John Edwards has already managed to walk into what may prove to be the new way the Internet can kill a political star: The campaign staff's inability to Google.

When it comes to the topic of politics and the Internet, being "YouTubed" is the new big worry for political campaigns. During last fall's elections, the former Sen. George Allen (R-Va.) was largely done in by a handheld video of him that was posted on YouTube that revealed -- as Rolling Stone so eloquently put it -- him putting his "digital foot" in his "twenty-first century mouth." But not to be outdone, Edwards has found a new way to be blogged down by the 'Net.

The Edwards campaign recently hired two liberal feminists to help with his quest for the White House. The bloggers were popular enough to get the Edwards camp to notice them, but they were followed by cybertrails of "out there" comments on their personal blogs about sex, politics and religion. Cybertrails Edwards staff didn't care to follow.

In the wake of the Edwards' campaign announcement that the two cyberhires Amanda Marcotte and Melissa McEwan would keep their jobs, conservatives went wild, and understandably so. Some of the postings in Marcotte's archives are typical of the angry, reactive liberal rants on the Internet.

An example: In the wake of the death of Supreme Court Chief Justice William Rehnquist, Marcotte wrote: "We are f-----." She explained: "Choice is gone. And as soon as Roe v. Wade is overturned, states will start outlawing contraception, and eventually the ideologically run court will find that there's no right to privacy, period and contraception protection will be gone.

"The only thing I can say now is that people who have enough children or don't want any at all -- get sterilized while you still can. As for those who want children, just not now ... well, I don't know. If you use condoms, stock up on EC now. If you use the pill, start exploring Canadian options."

That post, albeit unhinged, was not too bad compared to her direct attacks on "crazy" Catholic doctrines and practices. The media focus on her anti-Catholic rampage is ultimately what got the candidate himself uncomfortable.

Days after the story broke, the former North Carolina senator acknowledged that "the tone and sentiment" of some of her and another employee's writings "offended him."

The whole episode is disappointing - and not only because of the vulgar anti-Catholicism and bad staffing. I frankly expected a lot more from John Edwards. The man's done the vice-presidential thing before, so I figured he'd take more precautions. But if his first big campaign flub is any indication, Hillary Clinton and Barack Obama don't have much to worry about.

Edwards should have been especially careful not to offend religious voters, as just days before the blog controversy exploded, Edwards appeared on "Meet the Press," citing his own religious upbringing to answer questions about gay marriage. Did you meant that Senator Edwards or are you just trying to fool Churchgoers? Good luck with that with your new hires in place. Many voters can Google.

A good campaign would have realized that someone, somewhere, might care that he hired a woman who, in her blogging past-life, referred to the Pope as a "dictator" and described Catholic doctrines with ridiculing sexual imagery.

But other campaigns have got to thank John Edwards - they won't get caught making the same mistake he did. They'll hire people who truly realize the power of the Internet in politics today.