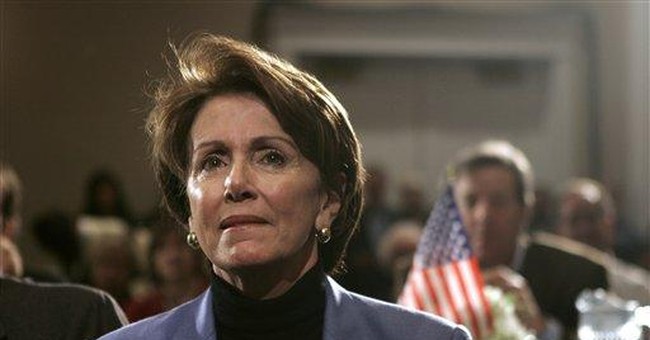 At the end of January, Nazanin Fatehi was released from an Iranian prison. She had been there for almost two years for the "crime" of self-defense against would-be rapists. Nazanin, then 17, fatally stabbed one of the attackers. But I'm not sure that matters.

The world should be outraged by what this girl went through. She should be a household name.

Her guardian angel was a former Miss Canada (2003), Nazanin Afshin-Jam. Afshin-Jam is a native of Iran -- her family fled during the 1981 revolution, her father having been victim of the Revolutionary Guard's tyranny. In Fatehi, Afshin-Jam very easily saw what could have been her fate and resolved to help her.

Afshin-Jam, an aspiring pop singer whose first record's release has been delayed as she has worked on saving the life of this young Iranian Kurd, shows what a little star-power and a lot of determination can do. Self-absorbed celebrities should put their power to use. Instead of reflexively Bush-bashing, they could put their hearts into a cause and use their popularity to make a difference.

What Afshin-Jam has done is particularly significant not just because of the life she's saved but because it strikes at the heart of the clash of civilizations we are facing today. Consider again that the fact that young Nazanin Fatehi killed one of her assailants is not what put her in jail. The issue is that Islamic law may have punished this innocent victim anyway. That's what we need to examine.

Instead, though, as a culture, we give more attention to a ridiculous press release from the Council on American-Islamic Relations denouncing the popular primetime-TV drama "24" for daring to portray fictional terrorists as Muslims. After the four-hour season premiere in January, CAIR whined: "The raw emotional impact of fictional scenes that include widespread death and destruction in America may adversely affect the public's attitude toward civil liberties, religious freedom and interfaith relations. The program's repeated association of acts of terrorism with Islam will only serve to increase anti-Muslim prejudice in our society."

They were not random terrorists who attacked us on Sept. 11 and who continue to go after our troops and allies in Iraq today. We really need to talk about these things. In his book "America Alone: The End of the World as We Know It" (Regnery, 2006), my colleague Mark Steyn writes that reforming Islam is key to winning the war on terror. It's something that non-Muslims can't really do but "all the free world" can "create conditions that increase the likelihood of Muslim reform, or at any rate do not actively impede it."

An essential part of this life-saving exercise is to support real women's rights. Nancy Pelosi may think she liberated hundreds of American girls to dream of one day becoming Speaker of the U.S. House of Representatives, but there are girls out there who are really actually oppressed. Women's rights are, Mark writes, "the biggest vulnerability in Islam." He continues: "Not every Muslim female wants to be Gloria Steinem or Paris Hilton. But nor do they want a life that starts with genital mutilation and ends with an honor killing at the hands of your brothers. The overwhelming majority of females in Continental battered women's shelters are Muslim -- which gives you some sense of what women in the Middle East might do if they had any women's shelters to go to. When half the population of these societies is a potential source of dissent, we need to use it."

Without being partisan -- or even demonizing the Iranian government -- Nazanin Afshin-Jam shone a bright light on a tremendous problem we have to grapple with. Blaming others for supporting the same war you once did isn't going to win this war. Facing hard questions -- harder than symbolic, albeit deeply demoralizing, congressional resolutions -- will.