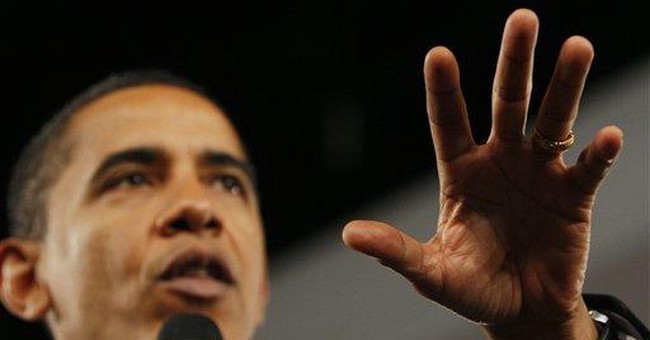 WASHINGTON -- The first however-many days of Barack Obama's presidency have been a study in amateurism.

Many suspected that Obama wasn't quite ready, but kept their fingers crossed. Optimistic disappointment is the new holding pattern.

What's missing from Obama's performance isn't the intelligence that voters acknowledged in electing him. It's the experience they tried to pretend didn't really matter. Experienced politicians, after all, got us into this mess.

Absent is maturity -- that grown-up quality of leadership that is palpable when the real deal enters a room. There's a reason why elders are respected. They have something the rest of us don't have -- yet -- because we haven't lived long enough. We haven't made the really tough decisions, the ones that are often unpopular.

There's also a reason why it's lonely at the top. The view is better, but the summit isn't so much a mountaintop as a deserted city.

Obama wants too much to be liked. This isn't a character flaw. In fact his winning personality and likability have served him well through the years. Growing up between two cultures -- black and white, American and Indonesian -- he had to learn how to get along. By all accounts, he became easy company.

But there's a price one pays in becoming president. Giving up being liked is the ultimate public sacrifice. This was the hardest lesson for Bill Clinton, who loved people and found the isolation of the presidency particularly brutal. Similarly, Obama wants to stay in touch with everyday Americans, as symbolized by his reluctance to surrender his BlackBerry.

There was a time last week when Obama looked younger than usual. Not youthful so much as not fully formed. He seemed out of place in his presidential role. In a word, he seemed haunted. Had he been visited by the ghosts of Christmas future?

Or had he looked across the table into the eyes of Nancy Pelosi and Harry Reid and realized that he was not among friends? Obama's lack of authority over the stimulus package has underscored the value of political experience and toughness -- and given weakened Republicans the leverage they needed to launch an aggressive attack.

In the midst of it all, Obama and Michelle went to an elementary school to read to second-graders, a now time-honored presidential release valve. Clinton read to children during his impeachment hearings. Bush, eternally and infamously, will be remembered for reading "The Pet Goat" to an elementary school class as airplanes were slamming into the World Trade Center towers.

Obama said they were "just tired of being in the White House." Oh, just wait.

Other manifestations of Obama's political greenness include his apology for picking lax taxpayers for prominent positions, his campaign-like tour to Elkhart, Ind., on Monday and his ponderous first news conference later that evening.

Why did Obama feel it necessary to apologize for others' mistakes? If proper vetting was the problem, then say so and correct it. The tax code is absurdly complex and most people with complicated lives hand over their numbers to accountants and hope for the best.

Admittedly, the problem became comical as one after another Obama appointee turned up with tax debts. Q: How do you get Democrats to pay taxes? A: Appoint them to Cabinet positions.

But Obama's eager confession -- "I screwed up" -- hit a hollow note. Doubtless, he was trying to demonstrate "change" by distinguishing himself from Bush, who could never quite put a finger on his mistakes. Rather than seeming Trumanesque in stopping the buck at his desk, Obama seemed more like an abused spouse who starts her day saying, "I'm sorry. It's all my fault."

In Elkhart, the president seemed locked in campaign mode, still wooing the crowd and seeking approval. At his news conference, the overriding impression was of a man not fully in control of his message or his material. Nine minutes into the first answer to the first question, I began missing Bush's customary dispatch. Bush's contempt for the media meant he never stayed long enough to bore us.

The faith of the American people may not have been misplaced in Obama. But the young senator from Illinois became a president overnight, before he had time to gain the confidence and wisdom one earns through trials and errors.

Those have just begun.