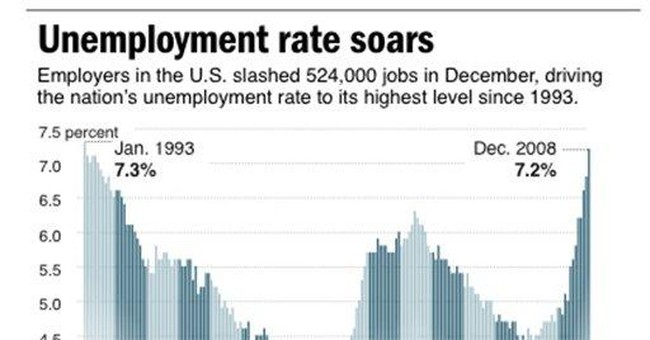 Anyone seated nearby quickly learns the story. They met in graduate school; both hold MBAs. Both recently have joined the swelling ranks of America's unemployed.

Their shared tales, if once unthinkable, are becoming increasingly familiar. First, blue-collar jobs disappeared. Now white collars are fading. The young and briefly affluent, accustomed to earning more than $75,000, suddenly have time on their hands, the latest victims of the current economic crunch.

The young woman has some consulting work "kind of lined up." Her severance package is too high to qualify for unemployment, and she's not sure how long her funds will last. She might head home to visit her dad, whom she hasn't seen in a year -- "too busy." Or, she always wanted to drive cross-country.

Her male companion, similarly laid off, is freelancing real estate development projects, but looking for a permanent job.

Something has gone terribly wrong with the American dream. No longer is a college degree -- or even an advanced degree -- a guarantee of employment or job security. Suddenly, there seem to be an awful lot of "consultants" floating around, lingering longer than usual over coffee because there's no office to get back to.

My 28-year-old niece, with whom I am staying (the rate is unbeatable), is similarly and suddenly "consulting" -- mostly through the want ads on MediaBistro and Craigslist these days. The magazine for which she's been a marketing strategist is suffering financial woes and has had to cut several positions, including hers.

"Consulting" and "freelancing" are old euphemisms for a new demographic, the upscale terms for "outta work." Down on their luck, these newbies to the unemployment lines aren't living paycheck to paycheck. "We're living gig to gig," says my niece.

How many consultants can dine on the dime of a tanking economy?

A new poll by Tina Brown's Daily Beast and Penn, Schoen & Berland Associates confirms that the Sarabeth's pair and my niece are not isolated anecdotes, but are part of a trend no one would have imagined a few years ago. "Gigonomics," Brown calls it.

The poll, conducted online among 500 employed Americans over 18, found that a third are working as freelancers or in two jobs. Of those who call themselves freelancers, 58 percent previously had a staff position with the company for which they're now doing "gigs."

This not-so-rosy scenario raises questions for which there are no ready answers. How long will it last? What if ... they can't find even temp work?

The Bureau of Labor Statistics' 2008 year-end report shows unemployment increases across the board -- all ages, races and job categories. In December, the number of people involuntarily working part-time for economic reasons reached 8 million, a rise of 3.4 million over the past 12 months.

My niece, whose persistence and hard work have produced a resume suggesting a much older person, figures she has a few weeks before she'll have to give up her studio apartment. The girl who put herself through college waiting tables -- and bought herself a Gucci watch to celebrate her first job in the Big Apple -- now asks herself: "Do I want to spend $2 on the subway or walk 30 minutes?"

It's chilly out there.

On the bright side, the wired generation is dealing with their recession-depression creatively. "Pink Slips Are The New Black" is the name of a blog created last November where visitors are invited to post their pink slips in exchange for "solidarity and support from your fellow laid-off professionals." There's a "pink slip party" video on YouTube featuring job recruiters (who wear green glowing bracelets) and job seekers (pink bracelets.)

If you gotta be broke, you might as well be cool about it. The newest fashion is "recession chic," which means last year's clothes get recycled. Ramen noodle potlucks served with Two Buck Chuck have replaced pasta and champagne dinners.

Doubtless, less fortunate, more-experienced members of the unemployed class are dry-eyed as they ponder the travails of laid-off MBAs and magazine marketers. But when that college education no longer pays off -- and the instant-gratification generation is counting change for the train -- we may be in for a longer haul than anyone cares to admit.