Vying for the GOP 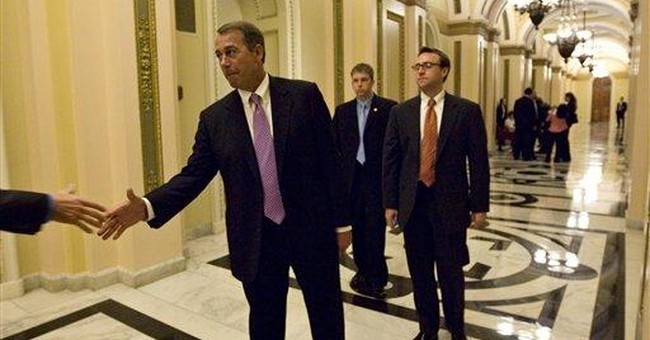 WASHINGTON -- When it comes to the six Republicans competing for lead dog of the GOP leadership, all are on point: They love Ronald Reagan, are pro-life, advocate small government, and promise more diversity and fewer taxes.

They are also, with one exception, locked and loaded -- armed in Second Amendment solidarity. During a 90-minute debate Monday at the National Press Club, only Michael Steele confessed to owning no guns.

Say what? In a race where Steele's conservative bona fides are already held in suspicion, did his admission unseal any deal? Can True Conservatives trust a man who doesn't pack heat, perchance to kill a moose?

The others admitted to owning several weapons, including Katon Dawson, the South Carolina Republican chairman, who said he had too many to count. In his defense, this is an honest answer from a native son of the South, where Labor Day is recognized primarily as the opening of dove season.

Chip Saltsman, who managed Mike Huckabee's presidential campaign, listed a bevy of beloveds with such specificity that one expected to hear nicknames.

The first-ever debate among contenders to chair the Republican National Committee attracted a standing-room crowd of more than 500. Imagine that many people showing up to hear six guys talk about the future of a party in the early stages of rigor mortis.

Then again, the new party leader, to be selected by the 168-member committee, will be the face of the Republicans during a new Democratic reign. By the choice of its chief spokesperson, the GOP will redefine itself. Or will it?

Will the new GOP stick to its guns? Will party leaders continue to cling to a base that no longer resonates with a growing majority of Americans?

Or, will Republicans recognize that the world has changed and that the fabled big tent needs to be more than a revival tent? Breath-holding not recommended, though it can produce a sensation of euphoria, often followed by glossolalia.

Looking at the panel of contestants, one can't help noticing that there are six men. But two -- Steele and Ken Blackwell -- are African-American. Steele is the telegenic, Fox-commentating, former lieutenant governor of Maryland, fondly remembered in some circles for his "Drill, baby, drill" speech at last summer's GOP convention.

Blackwell, former Ohio secretary of state and youngest-ever mayor of Cincinnati, is the social conservative's choice. (Read: Wholly owned subsidiary of the religious right.) He has also been endorsed by the College Republican National Committee. Other contestants include Michigan GOP Chair Saul Anuzis and Mike Duncan, the current RNC chair, who -- oddly and without irony -- is advocating "change."

All six men have something to recommend them, if not quite enough. Highly distilled, the upside-downside slate looks something like this:

Anuzis: Blue collar, former Teamster, beard (he brought it up in an interview), rides a Harley, straight shooter, knows how to deal. Downside: Beard.

Dawson: Worked for Republican tactician Lee Atwater at age 14 and is perceived as an Atwater-Haley Barbour combo, ambitious, passionate, tireless. Downside: Before his death, Atwater apologized for his ruthless campaigning.

Steele: African-American, celebrity, accomplished, mother was daughter of sharecropper (he brought it up). Downside: No guns and may harbor liberal thoughts.

All things considered, not a bad slate, but the devil is in the backroom where deals are made. As one longtime observer put it to me, this is the equivalent of electing a pope. He doesn't have to be a priest. But the College of Cardinals always elects one of its own.

Duncan's been-there, done-that status would seem to doom him, no matter how many times he holds up his 10-point plan, which could leave Anuzis and Dawson to face off in a North-South contest. Blue collar versus ... beige?

Anuzis worked his way through school while studying Newt Gingrich. Of Lithuanian descent, he learned to speak English at age 7 and would be the first first-generation American to serve as RNC chairman, if elected.

Dawson runs a family-owned auto parts business. And though a social conservative, his primary focus is on free markets and what Tammy the waitress down at the Lizard's Thicket, where Dawson goes for breakfast every morning, says she needs to feed her kids.

Perhaps it's time to resurrect the duel. Steele can call the shot.