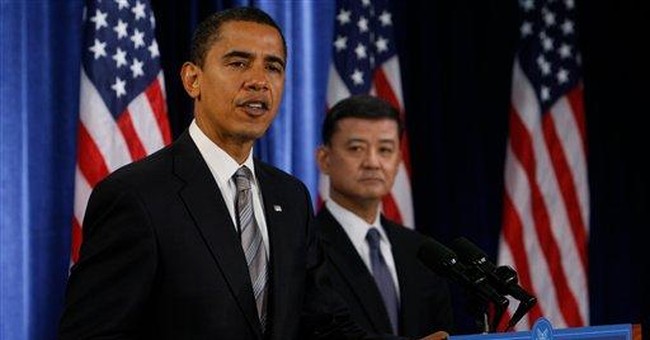 WASHINGTON -- It always seems like fun at the time. Then the photo surfaces.

Two guys, some beer and a cardboard cutout of Hillary Clinton have created fresh grief for the young and uninitiated to Washington Rules.

In the latest blog scandal-ette, Jon Favreau, a Holy Cross valedictorian and 27-year-old wunderkind speechwriter for Barack Obama, was captured clutching the prospective secretary of state's, um, pectoral area, while a fellow reveler, wearing an "Obama Staff" T-shirt, nuzzles Clinton's ear and holds a beer bottle to her smiling lips.

The photo popped up on Facebook for a couple of hours before being removed ... too late. The moment was captured and the rest was instant and persistent history. On the Information Highway, alas, roadkill is never really dead.

One day, Favreau was the golden boy of silken tongue. The next, he was just another dimwitted dude acting dumb.

Feminists groups such as NOW and The New Agenda are outraged that Clinton -- or at least her image -- is being treated disrespectfully by the boys. Conservatives are outraged that there's not enough outrage, as would be the case were the party boys Republicans.

An attorney wrote on the Feminist Law Professors blog that Favreau should not be excused for "youthful indiscretion" and questioned Obama's judgment "in continuing to rely professionally on someone so young and irresponsible and offensively sexist."

FitzWalter, quickly, my smelling salts! Oh, and dust off the guillotine while you're at it.

Only Hillary Clinton has made light of the "incident," hereinafter known as Night of BBB (Boys Being Boys). In an e-mail to The Washington Post's Al Kamen, a Clinton adviser wrote: "Senator Clinton is pleased to learn of Jon's obvious interest in the State Department, and is currently reviewing his application."

Hear, hear. Nipping nonsense in the bud is an essential skill for a secretary of state and Clinton used her shears deftly. If anyone recognizes a little harmless male sport, it would be the bride of President "Is." One thing is harmful; another thing isn't.

Nevertheless, Clinton's response has fallen short of what some deem appropriate. CNN's Campbell Brown charged Clinton with forfeiting her feminist cred, especially after issuing her own charges of sexism throughout the presidential campaign. Now that Clinton's a member of the Obama team, she suddenly has a sense of humor?

All of the above would be nonsense except that almost nothing any longer is. Nonsense is the new standard for controversy; and even party shenanigans qualify.

Puritans and prohibitionists would adore our brave new world of shutterbug infamy. The fact is, no one's having fun anymore, especially in the nation's capital, where one can't afford to let the tongue slip or risk being caught in the cross hairs of a cell camera.

Political veterans have learned, sometimes the hard way. This new generation -- the Obama cohort -- needs to review The Rules. Smart grown-ups in Washington don't get drunk in public. A glass of wine is a prop that rarely gets drained.

At a small, private dinner recently, where wine flowed freely (and no one took pictures), conversation turned to the day when politicos and others routinely enjoyed three-martini lunches. How did they do that? Not just the drinking, but the escape from scrutiny?

It was all about time. In low-tech America, people had time to sober up. There was no e-mail light blinking to demand your immediate attention, no insistent cell phones blasting "Fur Elise" into one's pocket or purse; no 24/7 news producers demanding instant responses to urgent claims and counterclaims. Several hours -- or even a few days -- could pass before anyone had to Do Something.

For all the gratification and convenience of real-time everything, downtime was underappreciated while it lasted. Even 10 years ago, BBB would have been vaguely recalled over Bloody Marys -- and quickly forgotten. Now young men goofing around are immortalized as misogynist maulers, portentous reminders to the rest of us that the gender wars won't end until irreverence and humor are dead.

In the meantime, feminists might channel their free-ranging anger toward, say, Iran, where yet another woman recently was sentenced to death by stoning for adultery.

And Facebookers might heed the saloon owner's orders: Check your weapons at the door. Cameras are lethal.

I Will Not Be Silenced!
Townhall
'Damning': Raw Story reports that states led by GOP governors had higher COVID-19 death rates in 2020, but…
Twitchy
Racial Appropriation in a 1986 Hit 'Haunts' Self-Described White Actor Fisher Stevens
Redstate
Adults in the Room: Retired Military Brass Not Afraid to Voice Their Concerns About Biden
PJ Media